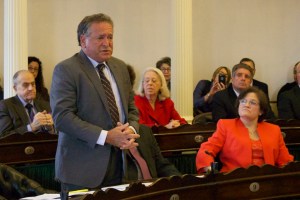 The conference committee decided to remove several consumer protection measures that the House Commerce Committee had folded into S.136 after the Senate passed an earlier version.

The final version of S.136 places rules on fantasy sports companies. The companies would need to adopt policies that make the games fairer, such as not allowing the owner or professional athletes to participate in the fantasy contests.

The Agency of Administration would be required to report back to the Legislature on what registration fees to place on fantasy sports companies, what mechanism to use for taxing the companies, and how much to tax them.

“Eighty thousand or more people engage in fantasy sports in the state of Vermont, and it’s a good thing to get some consumer protection and regulation around the whole industry,” said Sen. Michael Sirotkin, D-Chittenden, who sat on the conference committee.

“Our position has been that it’s better to regulate the industry so that there are rules of the road and so that consumers have an expectation that fantasy sports has a backstop for consumer protection,” said Chris Curtis, the director of the attorney general’s Public Protection Division.

S.136 would also change laws governing home escrow accounts. Those are accounts that people take out through banks so they can make monthly payments to the bank and pay their property taxes.

Rep. Mike Marcotte, R-Coventry, said the changes are designed to make it easier for low-income people to keep up with their property taxes.

The bill allows people to request a recalculation of their escrow payments if their property taxes are adjusted after the initial escrow calculation. Payments can be set too high if people forget to file certain paperwork right away. The change would help people who pay taxes based on their income and not their property value, Marcotte said.

He said those people who were paying too much would otherwise get their money back at the end of the year, but they would be better off having their money upfront. A lot of people are living paycheck to paycheck, Marcotte said.

The conference committee recommended, and the Legislature passed, a version that requires the secretary of state’s Office of Professional Regulation to perform a comprehensive study that looks around the nation and recommends how Vermont should regulate the home improvement industry.

“We got commitment from the secretary of state that there will be a thorough review of the whole industry,” Sirotkin said. He said the scope of that review will go “far beyond” written contracts and will address licensing, bonding and other issues.

Curtis has said his office received 216 calls related to home improvement fraud in the past two years for alleged fraud totaling $1 million. He said he is confident the Legislature will move forward with regulation once the study comes out.

“Sometimes the first year of the biennium is the opportunity to raise those issues, and we fully expect that those issues will continue to be of concern to Vermonters, and we expect the Legislature to act on them,” Curtis said.

“Our hope is that if there is some action in that area, that it will lead to a reduction in the number of consumer complaints that we receive on an annual basis,” he said.

Thanks for reporting an error with the story, "Legislature passes narrowed consumer protection bill"