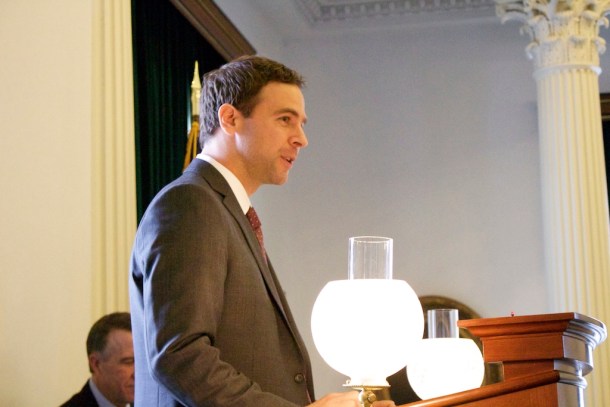 [T]he head of the Vermont Senate said Thursday he is making preliminary plans for a special session in the fall because of expected cuts in federal funding.

Sen. Tim Ashe, D/P-Chittenden, said he has asked senators to “pencil in” time in the last two weeks of October. That would be shortly after the federal budget goes into effect Oct. 1, the start of the federal fiscal year. The Legislature typically adjourns in May.

Ashe said the state would be “royally screwed” if the budget proposal the Trump administration unveiled Thursday is put into effect. Substantial cuts are suggested for environmental programs, labor and legal aid, among others. Some programs would be completely defunded, including the Community Development Block Grant program and the Low Income Heating Emergency Assistance Program.

“It would be so off the charts we’d have to come back,” Ashe said. Officials have said federal money accounts for about 35 percent of the state budget.

House Speaker Mitzi Johnson, D-South Hero, has also raised the issue of a special session with House members but has not talked about specific dates, according to spokesperson Katherine Levasseur.

“We are certainly deeply concerned and keeping an eye on the changes on the federal level, especially cuts that might affect Vermont,” Levasseur said.

Gov. Phil Scott said he too was concerned about possible cuts.

Ashe made the comments during a press briefing where he also pledged to make a $15 minimum wage the priority for the Senate during next year’s session. He said it would be necessary to take another year to figure out the implications of raising the minimum wage.

Among the concerns are that some might lose benefits like child care subsidies, offsetting the gains made by raising the minimum wage. If the wage were raised to $15 an hour today, Ashe said, 7,000 Vermonters receiving child care subsidies would be affected.

Several bills have been introduced this year calling for an increase in the minimum wage, including an effort by House Democrats to increase it to $15 an hour by 2022. None has emerged from committee.

Ashe said increasing the minimum wage was a matter of fairness and the best way to directly boost those struggling economically in Vermont. He said it was to be decided whether the $15 minimum would go into effect immediately or over time.

Scott has opposed boosting the minimum wage to $15 because it would raise costs for Vermont businesses.

Thanks for reporting an error with the story, "Ashe readies for special session in response to Trump cuts"