Editor’s note: This article by Matt Hongoltz-Hetling was first published in the Valley News on Sept. 13, 2016.

[W]HITE RIVER JUNCTION — Vermont education officials are taking a stand against a price hike they say will hurt the state’s ability to teach its most vulnerable students — those with significant cognitive disabilities.

Education Secretary Rebecca Holcombe says the new pricing for specialized tests favors New York and a few other large states at the expense of small states like Vermont and New Hampshire. 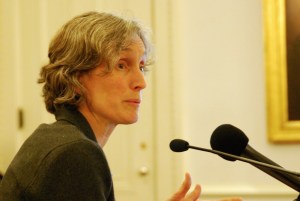 Last year, it cost the state of Vermont about $39 to administer an assessment test to each of about 460 students who fall into this category. Because some students are tested more than once per year, the state lays out about $77,000 annually to the nonprofit group that supplies the test, according to Amy Fowler, Vermont’s deputy secretary of education.

But next year, under a proposed fee schedule increase, the cost would increase dramatically to $459 per test, which would increase Vermont’s costs to about $423,000, according to Fowler.

“That’s $300,000 less to spend on the educational outcomes of kids, for the exact same product,” she said. “What we’re looking for is something that is balanced.”

On Thursday, Holcombe wrote a letter of protest to Dynamic Learning Maps, a nonprofit run by the University of Kansas, accusing the group of a lack of transparency, suspect voting and coming to a decision that punishes small states like Vermont.

“Certainly the most vulnerable youth of Vermont deserve the same instructional supports as those in more populous states,” Holcombe wrote, before issuing an ultimatum.

“We can say unequivocally that we will not remain” if the new pricing structure stands, she wrote.

Vermont currently shares the costs of the program with a consortium of 15 states, including those with big populations, such as New York, Illinois and New Jersey, and also those with small populations, like North Dakota and Alaska.

Holcombe predicted that other small states would also be driven out of the consortium by the price increase, triggering a domino effect in which the remaining states would be forced to exit themselves or shoulder a higher proportion of the costs.

Vermont joined the consortium in 2013, touting the assessment tool as a way to link the 1 percent of students who have significant cognitive disabilities with Common Core standards in English and math.

In New Hampshire, which is also in the consortium, Lori Kincaid, a program specialist in the deputy commissioner’s office, said Education Commissioner Virginia Barry was aware of the situation and mulling its options.

“She forwarded it to our assessment people, and they’re going to need to discuss it,” said Kincaid.

Neal Kingston, director of the University of Kansas Achievement and Assessment Institute, which develops and distributes the tests, said on Monday that “many of (Holcombe’s) concerns are absolutely legitimate,” and that the price point would be revisited before it is implemented in fall of 2017.

“I’m particularly troubled by the circumstances that have led to these very strong and firm feelings,” Kingston said.

By federal mandate, every state is required to assess each student’s academic progress; roughly 99 percent of students take the sort of standardized achievement tests that routinely impact both funding and curriculum choices for districts.

Kingston said the remaining 1 percent of students — whose disabilities range from severe autism to diminished intellectual capacity — have had their education neglected.

But Kingston said that though many of these students start without the tools to communicate, either in writing or in speech, they still have the capacity to learn.

The DLM assessment tool, he said, is designed to help teachers recognize, and overcome, the special obstacles that stand between these students and learning.

Over the last several years, the DLM program has been subsidized by a $25 million federal grant; next year, the expiration of that grant and a couple of other lesser factors have driven the University of Kansas to shift testing development costs onto the 15 states that actively use the assessment tool.

Some scenarios doled out the increases on a per-test basis, which meant that most of the increase would be borne by large states such as New York, which administers the test to an estimated 22,000 students.

But, during a survey of member states administered on Aug. 12, a different scenario, one which assigns a flat fee of about $370,000 to each state, received the most votes in a 5-4 decision.

During an Aug. 20 webinar, the survey’s results were upheld on a vote of 4-2, with two states abstaining and five “remaining silent,” according to Holcombe.

Holcombe has attacked the results of the survey and the webinar vote; in her letter, she blames DLM for failing to directly notify the chiefs of education, and said that the vote goes against the best interests of a majority of the states in the consortium.

Kingston said he agreed that the vote was not an ideal representation of the informed decisions of each member state.

Fowler said that Vermont is exploring other testing tools, but that switching from one tool to another is less than ideal, because data from before the switchover can’t be used for post-transition comparisons.

Kingston said he sent an email to Holcombe requesting that they have a discussion before Vermont makes a final decision.

“I want to hear from her what she suggests as next steps to recover from what I feel is a vote that was not in the best interest of most states,” he said. “I’d hate for parents, teachers and students in Vermont to miss out on the benefits of our program without a full discussion.”

Fowler said the email had been received, and that Holcombe and other state officials were eager to talk, as long as the fee schedule could be changed.

Thanks for reporting an error with the story, "Vermont education officials balk at tests’ price increase"