RUTLAND — Rutland Police Chief Brian Kilcullen says his department has few if any concerns regarding the proposed resettlement of refugees from Syria or Iraq.

Kilcullen answered questions from members of the Board of Aldermen at a Public Safety Committee meeting Wednesday night.

“From the standpoint of public safety,” Kilcullen said, “refugee resettlement is a nonissue.” 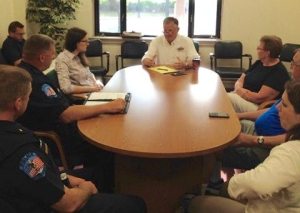 Kilcullen, who was formerly chief of police in Schenectady, New York, has experience working with refugee communities from Afghanistan and Guyana. In the early 2000s, he said, Guyanese families started to settle in Schenectady in large numbers.

Crime wasn’t a big issue, but there were certain cultural practices that had not been accounted for. For example, a Guyanese family raised a goat and slaughtered it in their driveway. This led to complaints from neighbors and a change in the city’s zoning rules.

According to Kilcullen, Rutland has already reached out to the Winooski Police Department for advice on a dispatch translation service. Winooski has a large refugee population, and there are at least 19 languages spoken in the local high school.

Winooski’s chief of police, Rick Hebert, said that for the last two years they’ve worked with a company called RTT Mobile Interpretation. RTT Mobile provides both a landline service and a handheld speaker phone about the size of a pager that can be taken into the field.

The speaker phone has a single button. Pressed once, it defaults to a Spanish translator. If pressed twice, it provides access to interpreters of 180 languages within 30 seconds to a minute.

The service is $20 a month, and calls are charged at $1.50 a minute. Hebert said on average they use it a few times a week and the largest yearly cost the department has incurred is $7,000.

Kilcullen said the budgetary impact of refugee resettlement on the Police Department would be minimal. In response to a question from Alderman Ed Larson about the department’s staffing needs, Kilcullen said they were in the process of recruiting new hires and hoped to be at full capacity within six months.

Several committee members asked about the department’s approach to religious and cultural differences and if it planned to conduct workshops or training seminars. Kilcullen said when he was in Schenectady the Department of Justice held a cultural awareness briefing on the Muslim and Sikh communities and that he would look to do the same in Rutland.

Last year the city of Rutland settled a lawsuit with a former police officer, Andrew Todd, that exposed racism in the department. According to an independent investigation, two officers in particular had engaged in racial profiling and targeted Todd, who is African-American, after he complained to his superiors. Todd left the department in 2011, and the two accused officers and the former chief have departed as well.

More recently a local club owner, Chip Greeno, sued the city and the Police Department alleging that the department has unfairly targeted his business because of the clientele — largely out of town and nonwhite.

“In my mind, it has to do with the race of the people who come here,” Greeno told the Rutland Herald. 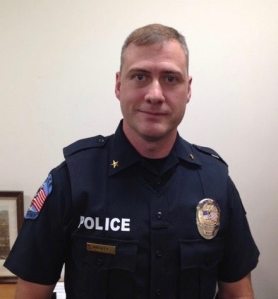 Sgt. Matthew Prouty said the department and its approach to policing has evolved in recent years. Project Vision, a community-based policing initiative that works with social service agencies and other organizations to address drug-related crime, has helped rebuild trust and accountability.

Prouty said the same model could prove to be very effective with the refugee community. If Rutland becomes a resettlement site, Prouty said, they would look to work with leaders within the population. “You want your vision center to reflect the community,” he said.

“The relationships that we’ve established through Project Vision will certainly help us address any issues that arise with the refugee population,” added Kilcullen.

“As far as actual crimes committed by refugees, to be completely honest, we rarely get those calls,” Hebert said.

David Allaire, who chairs the Public Safety Committee, said the meeting with Kilcullen was one of several the Board of Aldermen had arranged to better prepare for the possibility of resettlement. “When and if it happens we want to make sure it’s successful,” he said.

A decision by the State Department is expected in October.

Thanks for reporting an error with the story, "Refugees ‘nonissue’ for public safety, says Rutland polic..."

Gov. Scott remembers Travis Roy as ‘one of my heroes’