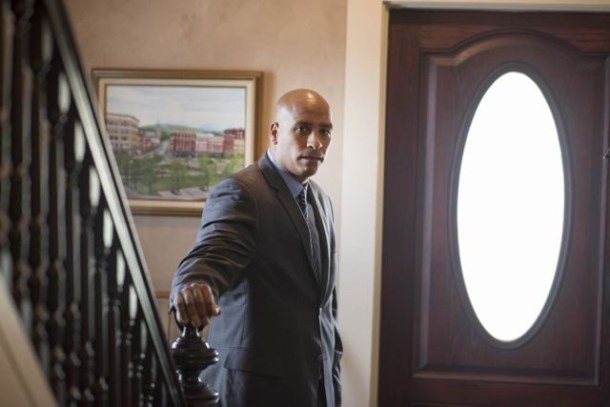 Andy Todd, a former Rutland, Vt. police officer, says he has been the victim of racism in Vermont. Todd at the Rutland office of his lawyer, John Faignant. Photo by Caleb Kenna

The city of Rutland reached an agreement with a former city police officer in a discrimination lawsuit early this week.

Andrew Todd, who worked for the department for six years ending in 2011, will receive $975,000 under the settlement.

Todd was the sole African American member of the Rutland City Police Department during his tenure. In his lawsuit, Todd said that he had been subject to racial slurs and insults from his coworkers.

He also charged that two officers engaged in racial profiling, had sexual relations with unofficial informants, and that their superiors within the department knowingly allowed the behavior to go on.

An independent investigation into the allegations of misconduct was released for the first time this summer.

The settlement means the case will not go to trial, but attorney John Paul Faignant said that Todd got what he wanted out of the case. Todd initiated the lawsuit because he wanted to bring attention to the discrimination and the behaviors of officers on the city’s police force, which, Faignant said, then-chief James Baker tried to cover up.

“He brought this lawsuit to tell the community what Baker tried to keep secret, and that was accomplished when the press reported it as far and wide as it did,” Faignant said.

The settlement, he said, is “icing on the cake.”

“It also shows that when those kinds of behaviors are brought to light they can cost very dearly,” Faignant said.

The city will pay a $500 deductible, and the remainder will be paid for under an insurance policy the city has with the Vermont League of Cities and Towns.

Rutland Mayor Christopher Louras said Tuesday that his “message through this entire ordeal had been about moving the department forward and being a model for other departments to follow regarding fair and impartial policing.”

The settlement, he said, “will drive us to redouble those efforts that have been successful.”

Louras defended former chief Baker and his work in Rutland. “Normally I do not respond to what attorneys say, however I know what Jim Baker did for the police department and the community,” Louras said.

Curtiss Reed, Jr., executive director of the Vermont Partnership for Fairness and Diversity, who worked with the Rutland City Police Department in the wake of Todd’s allegations, distanced the current department from the behaviors detailed in Todd’s suit.

“While details of the settlement have not been shared with Vermont Partnership, we wish to affirm that in 2012 with the hiring of James Baker as Chief of Police, the City of Rutland and its police department began to aggressively address the troubling conditions of racism and racial profiling manifest during Todd’s employment with the Rutland Police Department,” Reed wrote in a statement.

“Today the Rutland Police Department is a vastly different organization than it was from 2003 thru 2011 when Todd served as an officer,” Reed said.

Mary Brown-Guillory, president of the Champlain Area National Association for the Advancement of Colored People (NAACP), said she supported Todd in the case, but said had concerns that the behavior has not been adequately addressed.

“When you look at this, this is a reflection on the city of Rutland, not just one entity,” Brown-Guillory said.

Louras is confident the police department and city have shifted away from the attitudes and practices that Todd alleged.

“It’s in our history,” Louras said. “It would be wrong if we didn’t learn from the errors of the past.”

Thanks for reporting an error with the story, "Rutland settles police department discrimination lawsuit for $975,000"