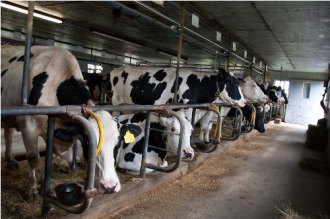 [A] federal judge has approved a $50 million settlement in a class-action dairy pricing lawsuit in the Northeast, a landmark step after seven years of antitrust litigation that has affected nearly 9,000 farms.

Chief Judge Christina Reiss of the U.S. District of Vermont approved the settlement in Allen v. Dairy Farmers of America on June 7. The decision came three weeks after a fairness hearing May 13, where farmers and officials across the region supported the settlement.

The class-action case, filed in 2009, alleged that Dairy Farmers of America Inc. conspired to become the sole seller of Grade A milk in the Northeast. The nonprofit cooperative, according to the lawsuit, is not member-focused and forced small farmers to join in order to avoid market pressures that would put them out of business.

Farmers also alleged that DFA used a closely affiliated for-profit company, Dairy Marketing Services, to become the sole buyer of Grade A milk and drive down milk prices. They alleged the defendants violated federal antitrust laws and, when directed to take action to remedy the situation, thwarted instructions by the U.S. Department of Justice and several state’s attorneys.

“We believe the settlement is an excellent one for dairy farmers in the Northeast,” lawyers at the firm Cohen Milstein representing the farmers said in a statement Monday. “We intend to defend the settlement and the court’s decision granting final approval to it on appeal before the U.S. Court of Appeals for the 2nd Circuit.”

Two farmers, Jonathan and Claudia Harr, have decided to appeal the settlement to the appeals court in New York City. The Harrs previously led a small cohort of farmers who sought to fire the lawyers, including those at Cohen Milstein. Reiss wrote in her June 7 decision that the farmers presented no evidence showing wrongdoing by the lawyers.

The $50 million settlement works out to $16.7 million for the farmers’ lawyers. About 9,000 farms will each get about $4,000, and at least 7,551 have already submitted claims under the settlement. The money is in addition to a $30 million settlement that Dean Foods Co. paid out in 2011 to drop its name from the case.

The approved settlement is the third proposed in the seven-year case. Reiss declined to rule on the first settlement in April 2015, prompting the small group of plaintiffs to seek to fire the lawyers. The second came in August, and it was amended in December.

“The complexity, expense, and likely duration of the litigation weigh heavily in favor of approving the (settlement),” Reiss wrote. “Any trial would be a substantial additional expense and a time-consuming process, which would be exacerbated by the fact that neither party is presently engaged in trial preparations.”

Reiss also wrote that the $50 million settlement was a “modest recovery” but “not insubstantial” when added to the $30 million settlement from 2011, and “when viewed against the backdrop of the risks of continued litigation.” The settlement is also “more extensive” than what Reiss would order if the case went to trial.

The settlement does not require Dairy Farmers of America to say it violated antitrust laws or conspired to bring down the price of milk. Instead, the settlement requires the cooperative to change its behavior.

Among the requirements of the agreement:

• Dairy Farmers of America and Dairy Marketing Services must allow farmers to leave the cooperative and join a competing cooperative, and the parties are not allowed to retaliate against any farmers for participating in the lawsuit.

• Dairy Farmers of America and Dairy Marketing Services must disclose certain financial information and fund an independent advisory counsel for four years to review the financial information. For five years, a farmer ombudsperson will work to investigate and resolve any complaints from farmers.

• A market administrator must facilitate independent testing of one of the cooperative’s laboratories and give a report. Farmers will be allowed to get “split samples” of their milk so they can test their milk at independent labs up to three times a year at no cost. There will be new standards for five years requiring reporting if a test shows that milk has been adulterated.

• Dairy Farmers of America and Dairy Marketing Services cannot obtain a controlling interest in Dairy One, a milk testing organization, for 10 years, and DFA members cannot hold a majority of seats on the Dairy One board.

Thanks for reporting an error with the story, "Judge approves $50 million settlement in class-action dairy suit"