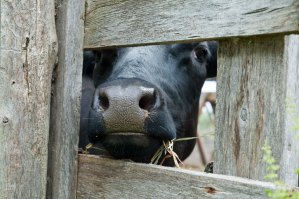 A dairy cow peers through a fence. File photo by Josh Larkin/VTDigger

[B]URLINGTON — A federal judge heard from dozens of people Friday about whether she should approve the latest settlement proposal in a nearly seven-year case alleging a conspiracy to drive down milk prices.

Chief Judge Christina Reiss of the District of Vermont presided over the daylong hearing aimed at determining whether a $50 million settlement is “fair, reasonable and adequate” for the roughly 8,900 farms in the Northeastern U.S. affected by the case.

This is the third attempt to settle the class-action antitrust case, Allen v. Dairy Farmers of America, which has been trudging along since 2009.

The lawsuit alleges that the nonprofit co-op Dairy Farmers of America conspired to create a monopoly over Grade A milk production in the Northeast and that its closely related for-profit entity, Dairy Marketing Services, sought to become the sole buyer of the milk to drive down prices.

Dairy Farmers of America and Dairy Marketing Services first agreed in 2014 to settle the lawsuit by paying $50 million and making various behavioral changes.

Reiss rejected that deal in the spring of 2015, and a small group of plaintiffs sought to fire the lawyers on the case. Lawyers then reached a second settlement in August, also for $50 million. The most recent settlement proposal came forth in December.

The new settlement builds off the first and second proposals. As in the first two, the 8,900 farms would split $50 million, with most farms receiving between $4,000 and $5,000. Because another company that had been named in the lawsuit, Dean Foods, already settled for $30 million in 2011, the total the farms won would be $80 million.

The second settlement, from August, created a five-year position called “farmer ombudsperson” to advocate on behalf of farmers with the Dairy Farmers of America and Dairy Marketing Services. It also included a four-year position on an advisory council to advocate for farmers and promote better pricing for farmers.

The second settlement also created measures to promote transparency in the process the two defendants use when they’re testing farmers’ milk. If a farmer thinks a processing plant adulterated the farmer’s milk, the ombudsperson would step in to mediate.

The third settlement proposal includes additional measures that would change the defendants’ behavior, and some of the measures agreed upon in the first and second settlements would be in force longer.

Additionally, the third settlement would — indefinitely — prohibit Dairy Farmers of America and Dairy Marketing Services from discriminating or retaliating against any of the plaintiffs for being part of the lawsuit, expressing opinions about the settlement, or ending their agreements with the marketers.

Farmers have overwhelmingly supported all three settlement proposals. In July, about 7,550 farms, or 85 percent of those represented in the case, had signed onto the first settlement proposal. As of Friday, more than 1,400 farmers had written to the District Court in favor of the third settlement.

On Friday, Stephen H. Taylor, a former agriculture commissioner in New Hampshire, told Reiss the new settlement is a “significant improvement, in my view, over the first proposal” and that “the alternative of going to trial is not rational at this point.”

Daniel Aubertine, a former agriculture commissioner in New York, also testified in favor of the new deal. He called the settlement “a positive first step” and said the number of letters received from farms in the case is a good sign.

“I’ve been concerned with the apparent manipulation in the marketplace that seems to have worked to the detriment of the dairy community,” he said. “I still strongly believe that the settlement is an important first step toward a more open marketplace.”

Gary Genske, a certified public accountant from New Mexico, testified on behalf of John J. King, a farmer in Pennsylvania. Genske gave a brief history showing a decline in dairy farming across the country and said King opposes the settlement.

Genske said the settlement provisions “give the illusion that the defendants will become more transparent to their membership” but that in reality, the financial information the Dairy Farmers of America would be required to produce would not help farmers weed out any “illegal business practices.”

He also said the settlement would have “very little impact on how DFA and DMS will do business in the future.” He said the court should grant “full access to all requested information, wherever located” and allow the case to go to trial if those terms aren’t met.

Jonathan Haar, a dairy farmer in New York who has led a small group of people in opposition to the settlements, testified against this one. He said farmers were being pushed into it because they had been misinformed about the prospects of the case.

“You have bankers, lawyers and politicians and processors standing before you and telling you what dairy farmers need, and I’m encouraging you to listen to the dairy farmers,” Haar said.

Thanks for reporting an error with the story, "Judge hears from farmers in third try at milk-pricing settlement"