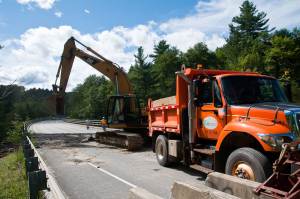 Late last week, legislators put the final stamp of approval on a revenue package to support state government functions for the next fiscal year.

The executive branch fee and tax bills together raise $28.1 million for the general fund, the bulk of which comes from increases in fees. The remainder of the new revenue goes to the education fund or other special funds. (The transportation fee bill raises $10.9 million, nearly all of which goes into the transportation fund.)

By far the largest source of new general fund revenue is an increase in the initial and annual fees that mutual fund companies pay, which together are expected to raise $20.8 million.

The final package also includes an increase in the registration fee charged to broker dealer agents — from $60 to $90. That bump will bring in $3.3 million in new revenue.

The bill also includes language on the EB-5 foreign investor program, calling on Vermont’s EB-5 center to become wholly self-funded, codifying the oversight and administrative structure, and directing the state to attempt to collect fees that were suspended while projects, including at Jay Peak, were under investigation.

The tax bill raises $3.8 million for the general fund, more than half of which is a one-time bump that comes from a change in accounting procedure. The legislation switches from quarterly to monthly filing periods for bank franchises and telephone taxes.

Early in the session, opposition mounted to Gov. Peter Shumlin’s proposal to impose a 2.35 percent provider tax on some 1,200 doctors and dentists throughout the state, and lawmakers scrapped it.

The House passed a revenue package that included an increase in the employer assessment charged to businesses that do not offer health insurance for their workers, as well as an increase in a tax on bank franchises. Both of those proposals were later abandoned.

Only $1 million of the tax bill is considered ongoing revenue, but Senate Finance Committee Chair Tim Ashe, D/P-Chittenden, said it is not from a new tax. Room rentals through websites like AirBnB are supposed to be subject to rooms and meals tax, but that often goes uncollected. The bill directs the Department of Taxes to make agreements with those companies to try to tighten the net on vacation rentals.

An increase in the gross fuel receipts tax will bring in $2.9 million in new revenue for a special fund that goes to support weatherization of homes. The bill changes that tax on a variety of energy sources from 0.5 percent; coal and natural gas will increase to 0.75 percent, while electricity will remain at 0.5 percent. Meanwhile, liquid fuels such as heating oil and propane will now be taxed at a rate of 2 cents per gallon.

An increase to the ambulance provider tax is projected to raise $1.2 million. That money will go to increase the reimbursement rates that ambulance services receive for Medicaid patients.

Ashe said that in the wake of last year’s tax package, which raised $29.7 million, he and others were resistant to craft another big tax bill.

“When we passed that we said we did not want to come back again and be looking to the same sources of revenue,” he said.

In three of the four years Ashe has headed the Senate Finance Committee, the revenue package relied more on fees than new taxes, he said. Lawmakers routinely review fees from different departments of state government and increase them to keep pace with economic growth.

“Overall, I feel like the Legislature left having found ways to pay our bills that did not lean heavily on Vermonters, which I think is a good thing,” Ashe said.

Rep. Janet Ancel, D-Calais, chair of the House Ways and Means Committee, said lawmakers “bent over backward” to try to minimize the impact that the revenue bills would have on Vermonters and businesses.

Much of the money raised through the revenue package will be levied from large businesses that work out of state, she said, referring to the mutual fund fees.

“We’ve raised money that we needed to raise to maintain services that we have a commitment to,” Ancel said, “and we did it without impacting Vermont families and Vermont businesses for the most part.”

Thanks for reporting an error with the story, "Legislative wrap: Higher fees and a few taxes"