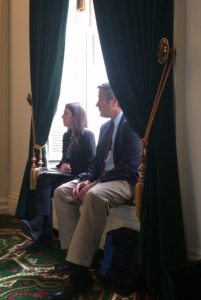 The four-term Republican lieutenant governor, who lost the 2010 governor’s race to Peter Shumlin, said Thursday he was weighing all the options on whether he would seek to return to the Statehouse as a senator or representative.

Dubie has been in the Senate chamber this week watching the debate over the siting of renewable energy projects. He lives in Fairfield and is among a group opposing a planned wind project in Swanton.

Dubie, who was a supporter of wind projects when he held the No. 2 job from 2003 to 2011, said he was frustrated by the debate and was emotional about the issue.

“I haven’t ruled out anything,” he said just before Thursday’s floor debate began.

“I’m here. I’ve been sitting in committee. My wife has been sitting in committee, and I’m watching and I’m listening and I’m learning and I’m going to observe what’s going to happen to a bill that I care deeply about and to people that I personally met that are impacted by industrial wind turbines, and I’m watching our government either respond or not respond. And that will, you know, I will weigh all that knowledge and I will make a decision about what, how, if I’m going to step up and continue to make sure that people are protected that should be protected,” Dubie said.

Dubie said he was not prepared to make a decision yet.

“I’m just saying I’m considering. I’m watching how my government responds and there’s positions in the House, there’s positions in the Senate. I’m not making an announcement. I’m not calculating anything,” Dubie said. “… As a Vermonter who’s served and a Vermonter who feels accountable to policies that gives government an ax … I am committed, in a personal way, to make sure that I do everything I can to protect people that I know are being impacted who live next to these industrial wind turbines.”

“Whether that translates into stepping up for office, it’s premature for me to say that, but I am, with sincerity … I’ve done things as an airline pilot who stepped up and ran. I’ve done some illogical things in the past in terms of my career and other things, and I’m going to consider what happens in our Legislature to respond to Vermonters that are being impacted,” he said.

For example, Dubie said it was critical the legislation include continuous noise monitoring at industrial wind sites. An airline pilot, Dubie has also raised questions about the safety of wind projects, particularly near airports.

Dubie’s hometown is in Franklin County, which saw one of its senators, Republican Norman McAllister, suspended from the Senate in January after he was charged with sexual assault. That criminal case is pending. McAllister has not ruled out running for re-election. Meanwhile, his seat has remained empty in the 30-member Senate.

The other Franklin County senator is Dustin Degree, also a Republican.

Rep. Carolyn Branagan, R-Georgia, has announced she is running for the Senate.

On the Democratic side, former Sen. Sara Kittell is running again. Also, Caroline Bright, a flight attendant, and Denise Smith, executive director of the Friends of Northern Lake Champlain, are running as Democrats for a Franklin County Senate seat.

Dubie’s town of Fairfield is represented in the House by Rep. Daniel Connor, a Democrat.

Dubie and his wife, Penny, and others have been opposing Swanton Wind, a proposed seven-turbine project 7 miles southeast of Swanton village and three miles northeast of St. Albans City.

Dubie said he is nearing retirement in his job as an airline pilot. The outcome of the wind debate and whether he believes people were properly treated will factor in his decision about a run, he said.

“What I’m saying is I’ve made emotional decisions to step up in the past and that’s how strongly I feel about this issue,” he said.

“This is not some calculating move. I’m just being honest and forthright. This is how important this is to me,” he said.

Thanks for reporting an error with the story, "Motivated by wind debate, Dubie weighs another run"