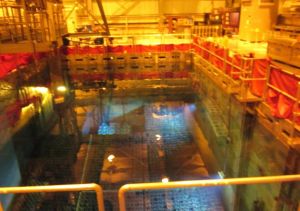 [V]ERNON — Federal regulators have given their blessing to Vermont Yankee’s decommissioning plans.

Before making any future changes to its plans — including those that would “significantly” boost decommissioning costs — Entergy must notify the NRC in writing, officials said in a Jan. 29 letter to plant administrators.

Entergy ceased power production at Vermont Yankee in December 2014 and submitted the post-shutdown report that same month. While formal NRC approval of the document is not required, the agency performed a detailed review.

The NRC also took public comment and held a public meeting in February 2015 in Brattleboro. Federal officials say they received a large number of comments from individuals and from Vermont officials.

The federal agency’s staff considered some of the issues the public had raised, documents show. Those included the adequacy and appropriate use of the plant’s decommissioning trust fund; long-term storage of spent nuclear fuel at the plant; the status of offsite emergency plans after Vermont Yankee shut down; and Entergy’s choice of the long-term decommissioning option dubbed SAFSTOR.

Other public concerns were not considered, either because they were outside the NRC’s authority or “were not relevant to the review performed by the NRC staff,” officials wrote. Those issues included questions or comments about the specific condition of various plant components including spent fuel; thermal pollution in the Connecticut River; transportation and storage of low-level radioactive material; and the acceptability of current NRC regulations.

In the end, the NRC came to several conclusions:

“We are proud of the efforts all our employees have provided and will continue to provide to ensure the decommissioning of Vermont Yankee is done as safely and cost-effectively as possible,” Cohn said.

Thanks for reporting an error with the story, "Federal review finds no issues with Vermont Yankee cleanup plan"