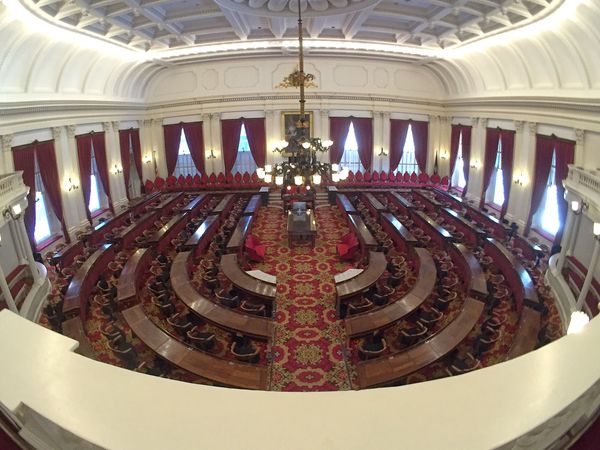 [T]he past two weeks have been deja vu all over again at the Statehouse. House members have been scrambling around in end-of-session style angst as they revisit legislation that they didn’t quite perfect in the last go-round.

Lawmakers are trying to fix a spending cap provision of Act 46 in time for a Jan. 29 deadline imposed by Gov. Peter Shumlin. The governor wants the Legislature to repeal the measure in time for schools to warn budgets for Town Meeting Day. But House members are adamant about keeping some kind of school spending penalty in place, and have struggled over the details of a proposal.

Last week, lawmakers trooped in and out of the speaker’s office. Secret meetings were held with groups of conservatives and liberals. A major vote was pulled off the floor. And House Education Committee members waited for hours to vote on a final version of a “tweak” to Act 46 spending caps while the powers that be ironed out their differences.

Days of dealmaking paid off, finally, and on Friday, lawmakers forged a compromise from a hodgepodge of proposed amendments.

The package the House will vote on Wednesday afternoon is an omnibus amendment to the Senate’s spending cap repeal bill, S.233. The House amendment maintains the spending threshold provision with a 0.9 percent increase in the allowable growth percentage for each district. For schools that spend over the threshold, the tax penalty would be reduced from a dollar-for-dollar penalty to 25 cents on the dollar. The amendment also allows districts to use a per pupil spending threshold with or without exclusions for special education and construction costs.

House Speaker Shap Smith, who doesn’t bring legislation to the floor unless he has the vote to support the Dems’ position, initially took a wait-and-see approach to the machinations over the bill. Now it’s ready for prime time, and while there will likely be a healthy debate on the floor over changes to the spending threshold, it won’t devolve into a food fight.

It’s likely that 30 or more Republicans in the House will vote against the amendment -- even though a provision from Rep. Paul Dame, a Republican from Essex Junction, is part of the amendment package. The House GOP also opposes the Senate’s repeal proposal.

Don Turner, the minority leader, has said he wants to keep the current allowable growth percentage thresholds in place as is. The fact that more than 100 communities will face penalties because they those thresholds, he says, means that the Act 46 provision is working as intended. Republicans want to reward districts that made an effort to cut spending.

Many Dems also want to keep caps in place, but they want a 0.9 percentage point increase in the cap to allow for some school spending growth that was out of the control of local districts, such as a spike in health care premiums (7.9 percent) and mistakes made in per pupil calculations from the Agency of Education. The amendment will spare many of the 100-plus districts from incurring tax penalties and allow schools to add more spending to their budgets.

There is also a contingent among the large Democratic majority in the House that wants a full repeal of the spending cap.

Sources say 27 high spending schools with per pupil spending rates near $20,000 per student would be whacked by the old excess spending penalty that would come into play if repeal goes through.

Wednesday’s vote won’t necessarily fall along party lines. Many House members will make a decision based on what the vote means for their district.

The uncontroversial Budget Adjustment Act proposal will be taken up on the floor of the House Tuesday.

Gun restriction proposals for the city of Burlington will be back on Thursday -- yet another piece of unfinished business from the first half of the biennium. House Government Operations will take up the measure, which now includes a provision that would allow law enforcement to legally obtain guns from patrons at bars and confiscate the firearms for a five day period.

In the Senate, most of the action will be in committee. Two major pieces of legislation are in play: the legalized sale of marijuana and a bill that would require employers to offer a set number of hours for sick pay to full-time and part-time workers.

The paid sick leave bill, H.187, is now in the Senate Economic Development Committee and a vote is expected on Tuesday. The legislation has changed significantly since it was originally introduced, although it largely mirrors the House-passed compromise that many business owners now support.

Workers are eligible for the benefit after one year of employment or 1,400 hours. Temporary and seasonal employees are excluded. The accrual rate is one hour of sick time for every 40 hours worked. Employees can earn up to five days a year.

While sources say support is building among conservative lawmakers, that hasn’t stopped political bashing outside the Statehouse.

The Vermont Democratic Party sent out a press release last week blasting Republican Lt. Gov. Phil Scott, who is running for governor, for not supporting paid sick leave. The party accuses Scott of “turning his back on average Vermonters” and says if he doesn’t support the bill he is “in line with Ted Cruz and Marco Rubio” (Republican candidates running for president). Scott, as lieutenant governor, would cast a ballot on the bill if there is a tie vote.

“Phil Scott is standing with his big donors instead of hard working Vermonters on earned sick leave,” Christina Amestoy, the Vermont Democratic Party communications director, writes in a statement. “His refusal to value our workers shows that he’s just another politician who’s wrong for Vermont.”

Scott says he hasn’t decided whether he will support the paid sick leave bill. “It’s not any secret I’m concerned about the burden on small businesses, but to say the bill has changed significantly is an understatement,” he said in an interview. “Both sides are trying to reach consensus and it’s getting more palatable.”

Scott was most worried about flexibility for workers who want combined time off, which allows them to take sick time for personal days if they wish.

“I like the direction it’s going, and I’m happy to take a position on it once it’s out of committee,” Scott said.

Meanwhile, the Senate Judiciary Committee will be marking up a marijuana legalization bill, which will be voted out by Friday. The committee is wrestling with complex law enforcement issues and is considering a ban on homegrown pot.

Banking is another issue that makes implementation of a legalization plan complicated because federally chartered banks won’t take money from an enterprise that remains illegal in the eyes of the feds.

The Senate Finance Committee has been taking testimony on banking with cannabis cash at the same time Senate Judiciary is hashing out legal issues.

Thanks for reporting an error with the story, "Montpelier Sneak Peek: End of session deja vu? Pot, paid leave and Ac..."