“Since the carbon tax has been proposed, I’ve heard from many Vermonters who strongly oppose higher cost gasoline and home heating fuels, and understand how this proposal would increase the cost of living across the board,” Scott said in a statement.

“It is clear to me that the vast majority of Vermonters want the Legislature to spend its time looking for ways to grow the economy and save working Vermonters money,” he added. 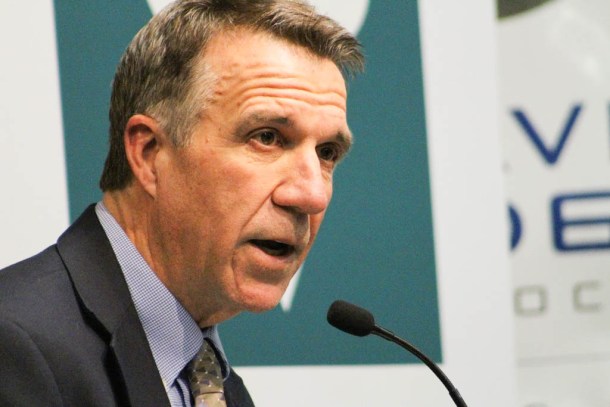 Democratic legislators have drafted a number of carbon tax proposals, including two that could raise gas prices by as much as 88 cents over 10 years. Ninety percent of the revenue generated by the carbon tax would be used to cut other taxes, legislators said.

The tax has become a divisive political issue in recent weeks, though state leaders have said the bill is unlikely to be passed in the next legislative session.

Republicans have used the issue as a political punching bag and maintain it shows a Democratic Party out of touch with working Vermonters.

Dave Sunderland, the chair of the state’s GOP, followed Scott’s Nov. 30 statement with an email declaring that Democrats “deny the existence of an affordability crisis” and said the tax would “drive up prices and force even more workers — and more jobs — outside our borders.”

Supporters of the tax, including representatives of VPIRG and Capstone Community Action, also rallied at the Statehouse in late November.

Paul Zabriskie, the weatherization director for Capstone Community Action, an advocacy organization, pointed to the possible creation of an energy independence fund, saying it would “weatherize the homes of 10,000 low-income Vermont families, and help tens of thousands of other Vermonters cut their energy use and bills as well.”

All of the current candidates for governor have come out against a carbon tax. Burlington Rep. Kesha Ram, who is running as a Democrat for lieutenant governor, reversed her support for the bill after originally signing on as a co-sponsor of the legislation.

Eric Davis, a retired professor of political science at Middlebury College, said it was unlikely the proposal would be supported by any major candidate.

“I think anyone who is running statewide is going to be hesitant about coming out in support of this, just look at Kesha Ram,” Davis said. “At this point, I see it as a non-starter, at least in the upcoming legislative session.”

Conor Casey, executive director of the state Democratic party, acknowledged the lack of support by leaders in the party, but said Republicans had falsely characterized the proposals, pointing out there are numerous carbon tax proposals that have surfaced in the Legislature.

“They are cherry picking one proposal,” Casey said. “I could pull out similar Republican bills and cherry pick lines to make them look like villains.”

Thanks for reporting an error with the story, "Republicans ramp up carbon tax criticism"