[A] large-scale proposed solar project in southern Vermont is drawing opposition from neighbors, the governor and the state's largest power company.

Ranger Solar is proposing a 20-megawattt, 155 acre project in Ludlow, and a study released last week by the New York-based developers says the electricity is needed.

But some neighbors and the governor say the project is too big. And Green Mountain Power, the state’s largest utility, says the power isn’t wanted or needed.

The study is required in order for the so-called Coolidge Project to be considered by the Public Service Board, and it buttresses the developer’s case in favor of the application.

A projected “capacity gap” in Green Mountain Power’s energy supply demonstrates a need for the project, according to the study. The utility is the designated buyer of Ranger Solar’s power, according to federal rules.

The shortfall indicates there is a need for the project, according to the study.

Officials from Green Mountain Power say they aren't interested in power from Ranger Solar in Ludlow.

Kristin Carlson, Green Mountain Power’s media director and chief corporate spokesperson, said she hadn't seen the study. “But we have a fairly balanced long-term portfolio, and don’t see a fit for these projects," Carlson said.

What Cohen mistakenly considers a capacity gap, Carlson said, actually results from an intentional strategy designed to take advantage of fluctuations in energy pricing. Green Mountain Power leaves open portions of the supply portfolio so that the utility can purchase low-cost energy when opportunities arise, she said.

Cohen said his company’s project will provide electricity at lower rates than Green Mountain Power can get elsewhere.

“They want to move toward solar, so our project fits right in line,” Cohen said. “Instead of buying power from Canada or out of state, our power’s in state and providing jobs in the state, at a [price] rate lower than they’re filing for.”

But if the project is approved, GMP must purchase power from Ranger Solar.

Under a law from 1978 called the Public Utility Regulatory Policy Act, utilities must, under certain conditions, purchase power generated by renewable sources.

Green Mountain Power filed a request with the Public Service Board a month ago asking the board to deny Ranger Solar’s application, in order to avert a requirement that they buy power from the Coolidge Project.

“If the board approved their Section 248 [application], and it includes asking for PURPA, then under this federal law that no one uses, we’d be required to [purchase Ranger Solar’s energy], which is why we’ve filed with the board to not accept the project, because it would cost too much for our customers,” Carlson said. 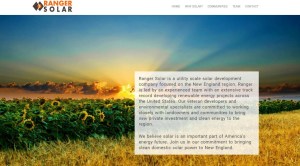 At 20 megawatts, the Coolidge Project would exceed by an order of magnitude the size of almost any other solar array in the state. A typical large project in the state generates just over 2 megawatts, and the largest currently puts out 5 megawatts.

The Ludlow solar array will save ratepayers $4.5 million and will create 400 jobs, Cohen said.

Local interest in the Coolidge Project

Ludlow select board Chair Howard Barton said that while the select board hasn’t reached an official stance on the project, there doesn’t appear to be much resistance among community members. At a recent informational meeting, only a handful of residents raised resistance to the proposal, he said.

“It used to be a big farm,” he said. “There’s a lot of fields and wooded area they’re going to clear out … but I don’t think it’s any different than what we go through with the housing developments and ski areas -- they have to log quite a bit out of those, too.”

The site seems to conceal the project reasonably well, Barton said, and it concentrates unsightly development in a single location.

“It sits out of the way quite a ways,” he said. “If you’re going to have a solar project, I’d rather have it that size in one area, rather than spread out all over through our community.”

The landowner of the property where the project is to be sited said he hasn’t heard many complaints about it.

At a recent town meeting on the project, only a handful spoke against it, “and some of them were just upset about the process that the town has -- what say the town has in the project,” said Ludlow landowner and farmer Dan Moore.

“We’re not on a main road -- we’re back in the country,” Moore said of his property. “People from town don’t have to drive by here for any reason, so it’s not going to be seen by very many people.

“It’s the perfect spot for it,” he said. “It’s right next to a substation, so it’s already an industrial view when you go by there.”

A neighbor said the site is neither out-of-the-way nor appropriately sized.

“Nobody will see them from where they live, but everybody drives by it -- it’s on a main artery,” said Ludlow resident Tom Potvin, who lives just up the road from the proposed development site.

“I’m not against solar altogether, but it’s got to be in the right spot,” he said.

“I think the biggest issue is, this is nice old farmland that’s been here for years, with nice old pastures and scenery,” Potvin said. “To do this huge development of solar panels … it’s an eyesore. It’s just too big.

“I can understand the energy, and that stuff, but like Shumlin said, it’s too big,” he said. “Everybody in town is up in arms about it.”

Gov. Peter Shumlin has in recent weeks disparaged large solar projects by out-of-state developers, both in general terms and in reference to Ranger Solar’s project specifically. 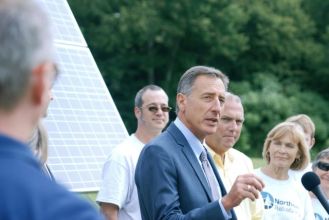 Such public comments are inappropriate for Shumlin to make against a company that has yet to file an application with the state, Cohen said.

Cohen said his company plans to file an application for the Coolidge Project this week.

Despite Shumlin’s stated opposition to a solar project of this size, and to out-of-state solar developers, Chris Recchia, a member of the Shumlin administration and the commissioner of the Department of Public Service, recently told opponents of a proposed large wind project in southern Vermont that they’d need to view the project in terms of the larger public good.

“My hope is that communities will find a way to evaluate projects and weigh in constructively on them. That said, you can’t always say, ‘Yes, I want this, but it should be somewhere else,’” Recchia said last month in Brattleboro. “At some point, if you want to be able to turn the light switch on at the wall, you’ve got to recognize that this is going to come from our own (energy-production) efforts.”

Recchia made his remarks in reference to a proposed 96.6-megawatt wind project in Windham.

The commissioner also weighed in on Ranger Solar’s proposals in September, saying that he finds it “hard to believe that a 20-megawatt project will find a place” that’s appropriate in Vermont.

Recchia later clarified his remarks, and said he has not yet formed an opinion on whether the Ludlow site is appropriate, and that both he and the governor had been speaking with reference to a suite of six sites that Ranger Solar proposed around the state.

“When the Ranger project was proposed, there were six [sites proposed] at once, and four of them were up north in electrically-constrained areas, and I think that’s more what the governor was referring to,” Recchia said. “Because what happens in electrically-constrained areas -- meaning the power lines can’t handle the load -- is that they can have a ripple effect” that would necessitate expensive infrastructure upgrades.

“The southern part of the state doesn’t have the same constraints,” he said. “It very well may be that the Ludlow site is a good site. We don’t know, because we haven’t seen the application. But I am reserving judgment.”

The Ludlow site offers more promise in that regard than most of the other sites Ranger Solar proposed, Recchia said.

Recchia said his point still stands regarding the unlikelihood of many good locations for large solar projects, however. While wind projects can generate 100 megawatts on a 20- to 30-acre site, the Ludlow solar project, as one example, would put out 20 megawatts from a 155-acre site.

Vermont contains few sites of over 100 acres where a large solar array wouldn’t impinge upon wetlands, forests or agricultural land to a degree that would overshadow such a project’s benefits, Recchia said.

“Being a Vermonter, and seeing a lot of these projects, it is hard for me to visualize a 100-plus acre site that is perfect,” he said.

“Maybe if it’s carefully designed it can be compatible, but my instincts tell me there’s probably a lot of review needed,” he said. “But it may make sense, in places that are not electrically constrained … to consolidate solar instead of doing 10 two-megawatt projects scattered around the landscape.”

Based in Manhattan and with an office in Maine, Ranger Solar wants to build the Ludlow project as one of four 20-megawatt solar farms in the state, with others in Barton, Highgate and Sheldon, according to paperwork filed in August with the utility-regulating Vermont Public Service Board.

Ranger Solar started up in April, has raised $7 million from private investors to build solar, and is developing a 500-megawatt portfolio to build in the near term. The four planned projects in Vermont would be part of that New England portfolio.

Thanks for reporting an error with the story, "20-megawatt solar project needed, developers' report says"