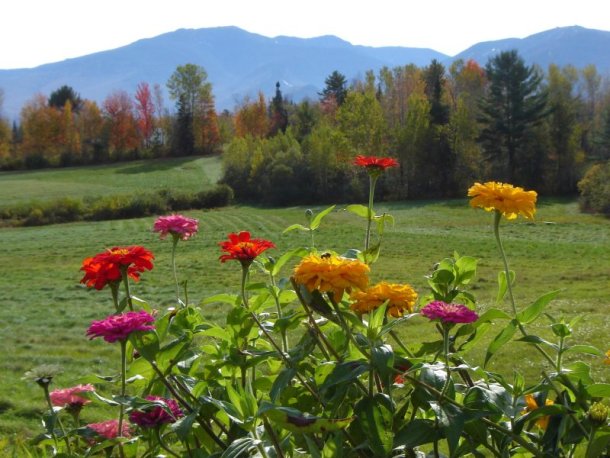 The Northern Pass transmission line, which originally proposed to cut through scenic areas of the White Mountains like Sugar Hill, New Hampshire, will now have 52 miles of buried cable in the range, an August 2015 release said. Photo by Jim Bricketts/Flickr.

[A] controversial proposal for the construction of a transmission cable that would bring hydroelectric power to New Hampshire was altered in order to have a smaller impact on the region’s valuable scenery, according to a statement by the utility provider.

Northern Pass plans to install a 192-mile transmission cable bringing 1,000 megawatts of hydropower to New England’s power supply originally had just eight miles of underground cable. It will now have 60 miles of buried cable, after an Environmental Impact Statement showed that the scenery was impacted by the overhead installations in some parts of the state and could potentially decrease tourism revenue, an Aug. 18 press release from Eversource Energy, the power company, said.

The cable will connect Hydro-Quebec’s hydroelectric power grid to Deerfield, New Hampshire, bringing energy into New England’s electric grid, according to the project overview. Collectively, New England lost more than 1,500 megawatts of energy in 2014 from power plants retiring throughout the region, including the Vermont Yankee nuclear plant, according to a Northern Pass fact sheet from February.

Utility companies are in a race to build out power lines from Quebec to southern New England. There are two proposals from Transmission Developers Inc. for two separate power transmission cable systems under Lake Champlain that would also bring power from Canada to Boston and from Canada to the New York metro area — New England Clean Energy Link and Champlain Hudson Power Express.

According to ISO New England, a regional nonprofit transmission organization, the average capacity for megawatts being used by New England is 30,000. The transmission cable, which is being constructed by Eversource Energy, would add 1,000 megawatts to that total.

An Eversource spokesman said that’s about the same amount of energy that Vermont Yankee Nuclear Power Plant used to generate.

The project started out as a way to help reduce regional emissions of carbon as part of a clean air goal, said Martin Murray of Eversource. That is still the case, he said, but over time, the need to find new, clean and diverse energy sources has developed in the marketplace.

“The price of energy – here in New Hampshire and elsewhere in New England – and the volatility of electrical energy pricing is tremendous and it’s really hurting our businesses,” said Murray. “They’re paying twice as much as electrical customers in some other states.”

“We have to find a way to control those costs and to smooth out the volatility,” he said.

Jack Savage, spokesperson for the New Hampshire Forest Society, said that while the 52 added miles of underground cable installation are a step in the right direction, there are still communities and landowners across the state who will be negatively impacted by the other two-thirds of the cable’s route that the energy supplier proposes to build as overhead lines. 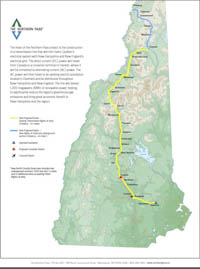 “Given that the new technology is apparently allowing Northern Pass to propose burying another 52 miles without increasing the overall project cost of $1.4 billion, there would seems to be opportunity for more burial along roadways,” Savage said. “The benefits Northern Pass touts are only enhanced by burial.”

“In addition, the project has committed to working with individual landowners to consider adjustments in structure location or design that might diminish any potential impact,” he said.

The North Country will have eight miles of underground cable installation, and the other 52 miles will be in the White Mountain National Forest. New Hampshire residents don’t have to pay for this project, but they will reap the benefits of the reduced energy pricing and cleaner air, he said.

“New Hampshire customers will realize $800 million in savings over the first 10 years of operation through lower wholesale power costs,” the press release stated.

The construction of the cable will take about two and a half years, Murray said.

Currently Eversource Energy is going through the state and national permitting processes, he said.

Thanks for reporting an error with the story, "New plan mitigates environmental impacts of Northern Pass project"