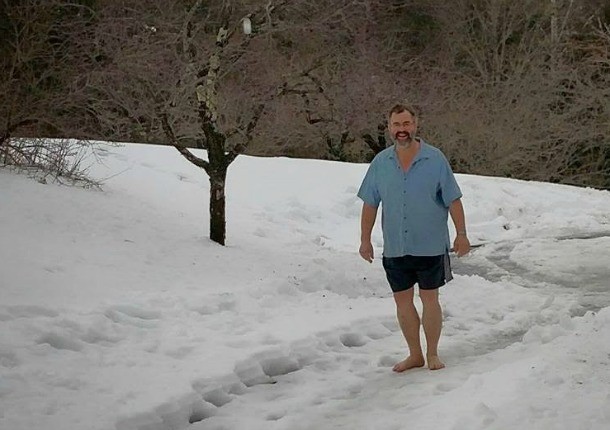 Warshow, 59, and his business partner Mathew Rubin, became the first independent hydropower producers in Vermont. Their lifelong friendship was forged during an anti-nuclear protest: In 1978, they were arrested for chaining themselves to a fence outside the Vermont Yankee Nuclear Power Plant.

In the 1980s, Warshow and Rubin channeled their anti-nuclear activism into the development of alternative energy. They bought several defunct dams and, using a new federal law, sought to sell power from the dams to local utilities. One of the utilities, Green Mountain Power, fought the scheme for a dam in East Montpelier, and sued over Warshow and Rubin’s biggest scheme: The development of a large hydro dam on the Winooski River in Winooski. The litigation over the dam and over rates for the resulting hydropower went on for years. Eventually, they defeated the utility company in court.

Warshow was, as one friend put it, a “quintessential Vermonter” of the hippie era. He came to Vermont from Long Island in 1976 to attend Goddard College, which was a hotbed of liberal activism, and soon after became involved with his professor, Scott Nielsen, in the anti-nuclear movement. (He later married Nielsen’s daughter, Jenny, and they made Marshfield their home.)

In one memorable protest, Warshow, Rubin and about 150 demonstrators at Vermont Yankee chained themselves to the fence around the plant. Rubin recalls that the Vermont State Police used bolt cutters to release the protesters and then carted them off to the Brattleboro Armory.

The protesters waited for hours. By evening, they had no food, no blankets, no Band-Aids for the scratches they’d gotten in the fray of the protest, and so Warshow went over to the trooper in charge and asked to use the telephone. His one call was to Jerry Diamond, the Vermont attorney general.

“He said, ‘hey you’re in charge of the state police, therefore we’re your responsibility,’” Rubin said. “He read him the riot act, and Diamond was so stunned he called the state police, and they brought him down to Brattleboro, driving 90 miles an hour.”

The protesters were charged with trespassing, and Warshow sued the state over the right to demonstrate. He argued the case pro se (he represented himself), and when the case went before the Vermont Supreme Court, he won.

Warshow didn’t have a law degree. In fact, he didn’t graduate from Goddard College, but he became an astute student of the law and became very knowledgeable about federal and state utility statutes.

His keen intellect and legal savvy came in handy when he and Rubin decided to develop hydropower in the 1980s.

Marty Miller, an attorney who worked for Warshow and Rubin, said Warshow saw that nuclear power “wasn’t the way to go and he couldn’t just say no; he had to have an alternative.”

That alternative energy source was hydro. Warshow and Rubin explored whether they could develop abandoned 19th century dams under a new federal law, the Public Utility Regulatory Power Act, which was enacted in 1978 and paved the way for independent companies to sell electricity to utilities. Today, 7 percent of the nation’s power comes from independent power producers, according to the Union of Concerned Scientists.

Warshow and Rubin started with the old Wrightsville Dam in Montpelier. They obtained a federal license and permits for the property and then sold the project to the Washington Electric Co-op. Then they acquired abandoned dam sites in East Montpelier, Springfield and Winooski.

The East Montpelier dam had been owned by Green Mountain Power, but the utility let the federal license lapse and Warshow and Rubin swooped in to buy it. The duo obtained the land for the dam through an eminent domain proceeding. GMP officials were stunned.

When the pair tried to develop the Winooski dam, they became enmeshed in a seven-year legal battle with Green Mountain Power, the city of Burlington, the city of Winooski and the owner of the Chace Cotton Mill.

Burlington wanted to develop a dam on the river falls and spent $4 million on environmental studies. Under federal law, municipalities get first dibs for hydro licenses. The trouble was, the city was backed by a private enterprise — Green Mountain Power — and that put Warshow and Rubin on equal footing. Their proposal cost half as much and produced two-thirds of the power Burlington hoped to produce. Eventually, Warshow and Rubin won.

“John was a fighter, but without anger,” Rubin said. “In a business partnership that lasted 34 years, I never saw him lose his temper.”

Miller said utilities have a state-granted monopoly for their service territories, and this was the first time an independent company was generating relatively large scale power.

“[John] led the fight at the PSB to obtain payments that were sufficient to actually build and run one of these plants, which was key to getting this whole industry going,” Miller said.

Warshow and Rubin bought GMP and Central Vermont Public Service shares (for themselves and their friends) and a group of 10 or so of the activists began showing up at the annual meetings. They gave utility executives a hard time about investments in the Seabrook nuclear plant in New Hampshire. (Warshow, who was a member of the anti-nuclear Clamshell Alliance, spent 30 days in jail for a protest at Seabrook.)

Steve Terry, who was an executive with GMP, describes Warshow as “a tough opponent.” Terry doesn’t recall that the utility ever won a rate case against Warshow.

“They were scrappers, they were challenging GMP in rate cases,” Terry said. “They really knew how to make use of the media and they did. Their strategy always was news by embarrassment.”

As stockholders, they had access to private company information that they were more than happy to share with reporters. They turned the media onto information about executive pay and expense accounts, for example.

Eventually, GMP negotiated a confidential agreement with Warshow and Rubin, and the pair agreed to not set foot on the utility’s property, not to interfere with rate cases and not to own stock in the company.

The rise of renewables

Terry said Warshow and Rubin were outliers, but he gives them credit for creating a visionary approach to renewable energy in Vermont that eventually became mainstream. The state of Vermont has adopted aggressive renewable energy goals, and GMP is now a national utility leader in the field.

“In order to do what we did, we had to create an industry,” Rubin said. “There were no independent power producers. They didn’t exist.”

Rubin and Warshow not only figured out how to go through the federal licensing process, they also had to work with the state to develop rates, contracts and regulations.

“Needless to say, back then the utilities had a monopoly, and they didn’t want anybody else playing in the sandbox,” Rubin said. Warshow was fearless, Rubin said, because he had a strong sense of what he believed in. He also had no ego.

“The question was never whose idea it was, but the result,” Rubin said. “With someone like that, with intelligence and integrity, you can accomplish a lot and we did.”

In September, Rubin, Warshow and the Winooski One partnership sold the dam to the Burlington Electric Department and the city of Burlington for $12 million.

Warshow didn’t have much time to enjoy the proceeds of his once risky investment. He was diagnosed with multiple myeloma, a cancer formed by malignant plasma cells, less than two weeks before he died on June 28 of cardiac arrest, following kidney failure.

Contributions in John’s memory may be made to the John L. Warshow Memorial Fund being created to support the development and maintenance of recreational, educational, and historical opportunities in Marshfield such as the Stranahan Memorial Town Forest that John helped create.

Editor’s note: Steve Terry and Mathew Rubin are members of the Vermont Journalism Trust, the nonprofit organization of which VTDigger is a part.

Thanks for reporting an error with the story, "Anti-nuke activist turned hydropower developer John Warshow was admir..."