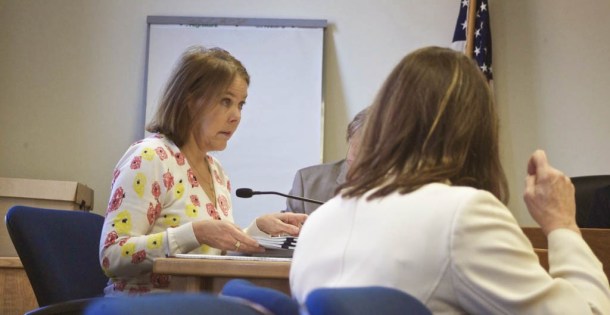 Eileen Simollardes, a vice president at Vermont Gas Systems, testified before the Public Service Board on the company’s delayed announcement of a cost increase to build a natural gas pipeline through Addison County on Wednesday. Photo by John Herrick/VTDigger

The Public Service Board is deciding whether Vermont Gas Systems violated regulatory rules when it waited months to notify the board of a significant cost increase for construction of a natural gas pipeline through Addison County.

Vermont Gas officials admitted Wednesday that it was a mistake to wait six months to notify regulators of a 40 percent cost increase that they were aware of in January 2014. The PSB was notified in July.

“I wish I had done this differently,” said Eileen Simollardes, a vice president at Vermont Gas Systems. “It was not done in any means to mislead or to be cute or slick. It was the opinion at the time that that was the right course of action.”

The Public Service Board approved the 41-mile pipeline extension from Colchester south to Middlebury on Dec. 23, 2013. The cost to build the project has since swelled 77 percent from $86.6 million to $153.6 million, largely due to rising construction costs. Vermont Gas still has construction contracts out to bid.

Now, the regulators are deciding whether the company violated board Rule 5.409 requiring the company to notify them of any cost increase above 20 percent. The rule does not say when regulators must be notified.

Some residents along the pipeline say the delayed notification has undermined trust in the company.

In late 2013, Vermont Gas had information that the cost of the project was increasing. By Jan. 17, 2014, the company received information from Clough Harbor and Associates, an engineering consulting firm headquartered in Albany, New York, of a projected cost increase of about 40 percent. The company then vetted the information before notifying the Department of Public Service.

In March, the company notified the department that the project cost had increased by 40 percent from $86.6 million to $121.5 million. The department told the company to notify regulators at the PSB. The company waited until July to do so.

Simollardes said the company waited because it wanted to first receive its collateral wetlands permits. On June 24, the company said it had the final permits to build the project and on July 2, the company notified regulators.

“We understood we had an obligation under 5.409. It was the timing of that obligation that was in question,” Simollardes said.

Despite the delayed notification, the Department of Public Service said the company should have seen the cost pressures coming sooner. Construction costs have more than doubled since first budgeted in 2013.

“Regardless of whether Vermont Gas ‘knew’ of the revised cost estimates in January or March, I am troubled that Vermont Gas did not see this coming sooner,” Public Service Commissioner Chris Recchia said. “Vermont Gas, more than anyone, should be monitoring such industry trends.”

The department and Gov. Peter Shumlin still supported the project after a second cost increase was announced.

Simollardes said Clough Harbor and Associates was responsible to monitor these costs. The company has since hired the international firm PricewaterhouseCoopers to develop cost estimates for the project.

“We did see cost coming at us. We did not see the magnitude of those costs coming at us,” Simollardes said.

Wednesday’s hearing was the last the board has scheduled. Parties will decide by the end of the month when they want to submit legal briefs. The board could then issue a decision as soon as next month.

A second phase of the proposed natural gas pipeline extension, from Middlebury to the International Paper plant in Ticonderoga, New York, was scrapped last month.

Thanks for reporting an error with the story, "State regulators weigh penalty against Vermont Gas"