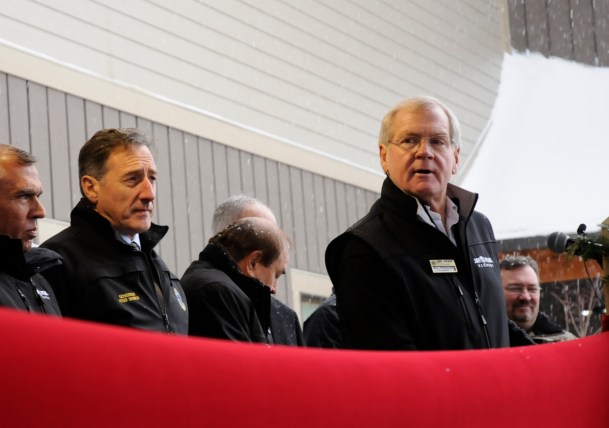 The management of Jay Peak Resort is defending its right to convert $17.5 million in equity stakes held by immigrant investors into unsecured, nine-year loans. The conversion was implemented on Aug. 31, 2013, without the knowledge or consent of 35 immigrant investors who each put up $500,000 toward the construction of Tram Haus Lodge, which is part of the Jay Peak Resort.

The deal was disclosed to reporters and the Vermont EB-5 Regional Center last year, but investors were not sent a copy of paperwork for the original loan until May of this year.

Jay Peak has since offered a second IOU to investors that shortens the repayment period to five years. The promissory note is secured by the value of Jay Peak Resort, says company president Bill Stenger.

But a group of 20 disgruntled investors question the value of the guarantee. Several say they expected to receive the principal on their investments at the end of a five-year period.

The Tram Haus Lodge, which was constructed in 2008, is the first phase of $312 million in EB-5 investments in Jay Peak Resort, located in the Northeast Kingdom.

The company and the state’s Agency of Commerce and Community Development say the decision to convert the equity investments into loans was entirely within the company’s rights.

The federal EB-5 Immigrant Investor program, through which Jay Peak has raised about $300 million for development of Jay Peak and other sites in the Northeast Kingdom, requires all investments to be at-risk, meaning there can be no guarantee of payback.

Quiros bought out their equity stakes, he said, thereby ending their limited partnership in the firm. The transaction effectively meant they were no longer EB-5 investors, Quiros said, which in turn freed him up to guarantee repayment. Such a guarantee would not have been permissible within the program’s strict confines, he said.

“We took something that was not guaranteed and made it guaranteed,” Quiros said in an interview Sunday. “How can you possibly call that wrong?”

But about half of the Tram Haus investors were incensed when they learned in January that their $500,000 ownership stakes in the project had been turned into IOUs the previous August. They were upset by delayed notification about the deal, unhappy with the terms and doubtful of its propriety. The revised note, issued in July, did not appease them. Turning an equity investment into a loan is a big deal, according to Ronnie Fieldstone, a securities lawyer who served on the best practices committee of the Association to Invest in the USA, an EB-5 trade group of which Stenger is a board member. Fieldstone is not familiar with the details of the Tram Haus arrangement; he spoke broadly about EB-5 investments in general.

“But there’s nothing inappropriate about having that right, as long as you tell people about it,” Fieldstone said.

Stenger and Quiros hold that their sole discretion was established very clearly in the agreement all investors signed. What they didn’t do was let investors know they were exercising it. In that the Tram Haus friction is unique.

Controversy is not new to the EB-5 world. Since the inception of a “regional center” pilot program in 1992, a few high-profile scandals have stymied the works.

Most involve outright scams, such as the spectacular alleged swindle the U.S. Securities and Exchange Commission settled with EB-5 developer Anshoo Sethi in March. Less scandalous is the profound disappointment of legitimate projects that, for whatever reason, don’t gain enough traction to create the American jobs that earn investors and their families permanent residency. In some cases, investors don’t just lose their money; they get deported.

None of that is the case with Jay Peak.

All six EB-5 projects the resort has undertaken have been substantially completed: hotels and amenities built, evidence of job creation approved by federal overseers, and permanent residency obtained. Some investors have gone on to achieve citizenship, Stenger said, and now they’ll be repaid. Two more projects already are lined up in the EB-5 queue, with still more in the pipeline.

Stenger is the first to admit he was “clumsy” with notification about the August transaction to close out the limited partners’ equity in Jay Peak’s first project, which funded construction of the Tram Haus Lodge.

In hindsight, he said in an interview Tuesday, it may have been better to poll all 35 investors to gauge their satisfaction with the terms of the deal.

“But I think what they wanted was to have their funds returned,” Stenger said. That’s what the promissory note guarantees, he said.

Quiros said the decision to execute the investors’ exit strategy in August 2013 was prompted partly by some investors who had asked for it, and also by an approaching promotional trip to recruit investors for pending EB-5 projects — namely, the AnC Bio biotech research and manufacturing facility in Newport, and buildout of Q Burke Mountain ski resort in Burke.

He wanted Stenger and Jay Peak representatives, as well as Gov. Peter Shumlin and other state officials, to be able to say on a trip to Asia that his first batch of investors were being paid back.

“It shows the world of EB-5 that I’m giving money back to investors,” Quiros said. “OK, over time, but at least now you know you’re going to get your money back.”

Criticism or no, Quiros said, all the projects he’s undertaken have been approved and built.

Stenger pointed to the state’s revised revenue forecast, unveiled July 24 by the state’s consulting economists. Job growth in historically downtrodden Orleans County for the first time is outpacing all other counties. In their presentation to Shumlin and the emergency board, economists Tom Kavet and Jeff Carr attributed the growth to Jay Peak.

Stenger said he is making up for poor communication that led Tram Haus investors to question the circumstances of the deal.

“I made some mistakes, and there’s going to be news tonight of mistakes in the world. I feel we have really addressed those issues,” Stenger said. “But we’re doing a good job, we’ll continue to, and we’ll certainly learn from this situation. Believe me, I will not have this issue in the future.” 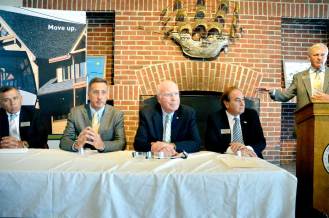 Sen. Patrick Leahy, D-Vt., a champion of both EB-5 at the federal level and Jay Peak’s Northeast Kingdom Economic Development Initiative in Vermont, is unswayed in his support of both the resort and Stenger as its leader.

“I know Bill, and what he has done for Vermont speaks volumes,” Leahy said Monday in a written statement to VTDigger. “He has acknowledged that he did not keep these investors informed in a timely way, that he regrets that, and that he’s intent on learning from this experience what he needs to do better. I know he cares about his community and his business partners and I trust that he wants to ensure that his investors are treated fairly.”

Leahy said the hundreds of investors who have gained permanent residency, by proving to the federal immigration authorities that their investments in Jay Peak created jobs, “speaks to how seriously Bill has taken his obligations to the investor community.”

He added that he will continue to press in Congress for the EB-5 regional center program to be made permanent before it expires in September 2015.

“I know that Vermont’s program and those who use and promote it will continue to improve and strengthen their practices in order to promptly resolve these concerns,” Leahy said.

Shumlin did not respond to two requests for a response to the matter. In a press conference Tuesday, he said the state’s role is to do due diligence to ensure propriety “whenever we have concerns.” “And obviously, we’re doing that,” Shumlin said. Patricia Moulton, secretary of the Agency of Commerce and Community Development. Courtesy photo,

Pat Moulton, Shumlin’s newly appointed secretary of Commerce, said Monday her staff will take the Tram Haus situation into consideration as it looks at new memoranda of understanding with future EB-5 projects. “Yes, we would expect a higher level of communication,” Moulton said. “It’s a good business practice, whether it’s required or not.” The regional center is rigorous in its oversight of all projects, Moulton said, but the issue of the transaction itself — converting an investment to a loan — is between Jay Peak and investors alone. It’s not an agreement to which the state’s regional center is a party.

Anthony Poore, a senior community development analyst with the Federal Reserve Bank of Boston, led a delegation to Newport in September 2013 to learn more about EB-5 as a tool for rural economic development.

His office had heard about the program’s positive impacts in the Northeast Kingdom, and staff wanted to learn more about it from a project and regional center widely perceived as among the better outfits in the country.

Boston Fed officials were impressed by what they saw at the time, and have continued to consider its viability for other states.

Without direct knowledge of the Tram Haus deal, Poore said Monday, the Fed could not offer comment.

But news of dissatisfaction among some investors, Poore said, “does cause us to pause.”

Thanks for reporting an error with the story, "Jay Peak defends dissolution of partnership with EB-5 investors"