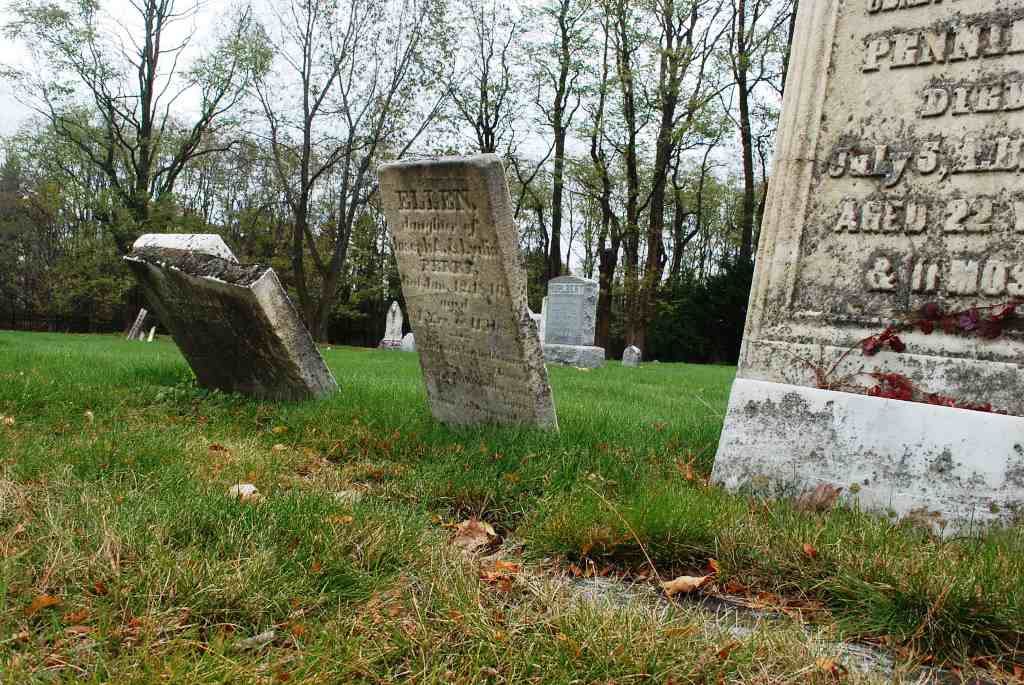 Between the swishing cars of Vermont 15 and the broad sweep of the Winooski River valley is a cemetery where gravestones, edges softened by time, lean this way and that. The grass between the stones is trimmed short, the ground a smooth, green carpet sweeping out beyond the fence into an expanse of summer’s last color.

No hummocks, no hills, this sliver of land is unwrinkled, unbroken, flat to the edge, where a steep, overgrown slope swoops down into the valley. In the distance a plane lands at Burlington International Airport, on tarmac laid on similarly unrumpled land.

These expanses of level ground perched above the Winooski River are not the result of human labor. Cemeteries, airports, soccer fields and housing developments across Vermont have prehistoric friends to thank for the ground on which they stand: ice and water.

As the ancient ice sheet that covered Vermont melted away 12,000 years ago, the melt water scoured the land, carrying sand and gravel down to numerous frigid lakes. Where the rivers met still water, deltas formed. These ancient deltas can be found all over Vermont, perched along the slopes of every major valley in the state.

“There are hundreds of them,” said Craig Heindel, a consulting geologist with Waite-Heindel Environmental Management in Burlington.

From about 70,000 years ago until 10,000 years ago, Vermont was depressed under the weight of an ice sheet as much as a mile thick in places. At its maximum extent, this ice sheet stretched from the Pacific Northwest to Long Island. About 19,000 years ago, the climate warmed enough to melt the ice sheet slowly northward.

As the ice melted, water washed through the barren landscape, carrying chunks of ice, gravel, sand, silt, and clay. The rivers of Vermont were flush with water and earth. Where the rivers slowed and emptied into lakes, they dropped their earthen loads.

The rivers dropped the heavy stuff first: gravel, then sand, then silt, then clay. That meant the force of the water sorted sediments into sections distributed across the underwater landscape. Sand and gravel were dropped first at the mouth of the river; silt and clay were carried farther out into the lake. These simple physics resulted in a sandy, fan-shaped, flat-topped delta formed just at the surface of the lake. 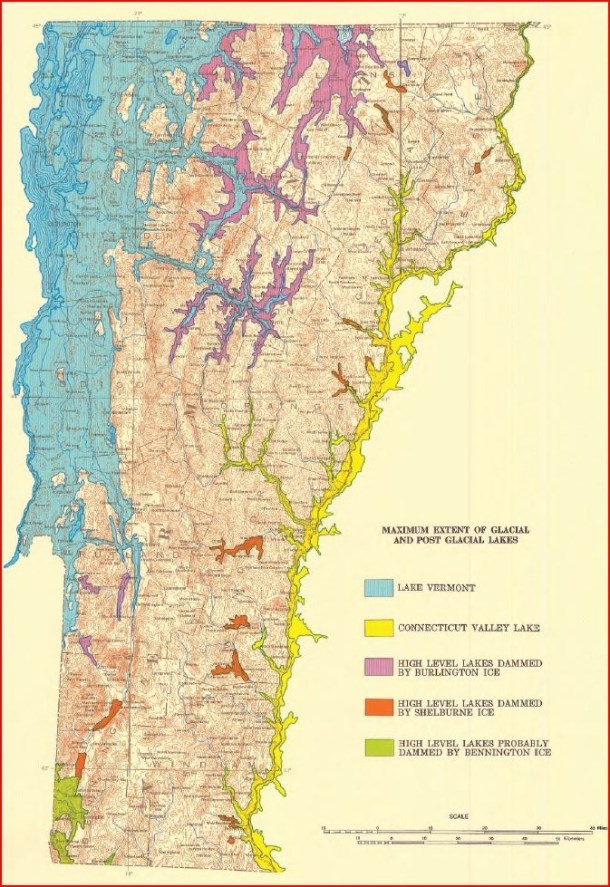 Ancient lakes formed as the ice sheet receded from Vermont. Image from the Surficial Geology Map of Vermont, courtesy of the Vermont Geological Survey.

Where is that lake now?

The answer is a matter of the dance between ice weight and location, land elevation and sea level.

A vertical mile of ice is rather heavy. All of Vermont was roughly 500 feet lower 13,000 years ago than it is today. Over the millennia, the crust of the Earth has rebounded from that weight, just like the couch cushion after Uncle Al gets up for another beer (only a lot slower).

In the Connecticut River valley a 200-mile-long finger of water called Lake Hitchcock formed. That lake, which would have drained southward, was bounded on its southern end by a pile of debris bulldozed into place by the ice sheet. Eventually, the lake’s outlet washed away that debris and Lake Hitchcock drained. The rivers that ran into Lake Hitchcock formed deltas, which can now be found perched on the slopes of the valley.

In the Champlain Valley, the large Lake Vermont formed. Lake Vermont would have drained to the north like modern-day Lake Champlain, but was blocked by the still-melting ice sheet. Over the years the ice melted more and more, until one day the narrowed ice dam broke and Lake Vermont drained in a matter of hours. The deltas formed on the shores of Lake Vermont can now be found perched at 625 feet of elevation on the slopes of the Green Mountains.

The ice dam that had blocked the drainage of Lake Vermont also blocked the incursion of the sea. Once the dam broke and the lake drained, saltwater from the St. Lawrence River mixed with the fresh water of the lake, forming the brackish Champlain Sea.

Rivers continued to wash into the sea, leaving deltas at 325 feet of elevation — exactly the elevation of the Burlington International Airport. In fact, the airport in South Burlington and St. Michael’s College and Camp Johnson in Colchester are all on one giant delta formed by the Winooski River running into Lake Vermont.

Slowly, the land rebounded from the weight of the ice. As it did, the northern outlet of the Champlain Sea shrank, closing off the lake from the sea. The brackish water was freshened by the rivers running from the mountains. The Winooski River continued to run to the water, and as the lake got lower and lower as the land got higher and higher, the river cut down into its own deposits, through its own delta. It carved the sweeping valley visible today from the overlook in Colchester near St. Michael’s. 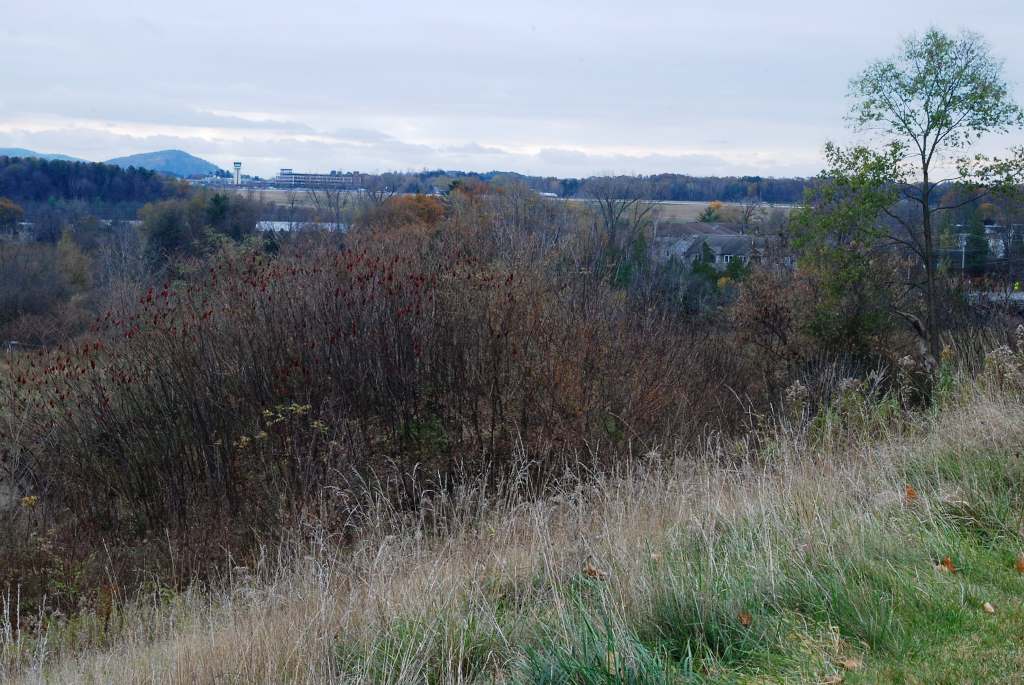 At the overlook on Vermont 15 in Colchester you can stand on one arm of an ancient delta and look across the valley to the airport perched on another arm of the same delta. Photo by Audrey Clark/for VTDigger

Given that there are hundreds of deltas throughout Vermont, how do you know when you are standing on one?

The first clue is that the ground is very, very flat. The sides of the delta will be steep, because that’s how it formed in its historic lake, and because sand erodes very easily.

At Sunny Hollow Natural Area in Colchester, mountain bike trails swoop up and down the steeply eroded gullies on the slope of the ancient delta.

As for the internal structure, try digging a hole. The soil should be almost entirely sand, perhaps with gravel mixed in. If you are lucky enough to view a stream bank or quarry cut into the side of a delta, you’ll see details that reveal how the delta formed.

According to Heindel, deltas have “long, uniform layering that is not chaotic.” Each spring, when snow melt flooded the river, it scoured the barren land and carried an extra load of sediment down to the mouth of the river, where the sediment was deposited. That flush of sediment formed distinct bands of sand. “It’s very regular and linear and has parallel layers,” Heindel said.

Finally, to be sure you are on a prehistoric delta, you must be standing where a river and a lake met. “Look for evidence of a stream or river that created the delta, and then evidence that there was a lake or ocean into which the delta was formed,” Heindel said.

Many of Vermont’s valleys had glacial lakes in them, so there may well be deltas near where modern-day streams enter these valleys. Heindel said there are deltas in all of the major valleys in Vermont. There are even deltas that formed in the high-elevation Lake Winooski, which covered the land on which Montpelier now sits.

Aside from soil and landform, you can look to human uses to reveal the geology beneath your feet. You may find sand or gravel quarries in or on the delta, and of course cemeteries are common because the soil is so easy to shovel.

Prehistoric deltas are also a good place to find pine-oak-heath sandplain forests, a rare natural community that depends on the sandy soil and regular fires. One of the best examples of this community in the state is at Camp Johnson, where the National Guard performs prescribed burns to maintain the fire-adapted red pines.

From Vermont’s Green Mountain spine to the clay bottoms of its lakes, our state has been worked by the forces of ice and water, crushing, scouring, and depositing. Our human landscape — where we place our homes, our recreation, and our dead — is shaped by the work of ancient ice, ancient water, and the sand they carried.

Thanks for reporting an error with the story, "Landscape Confidential: Ancient deltas a gift from the glaciers"