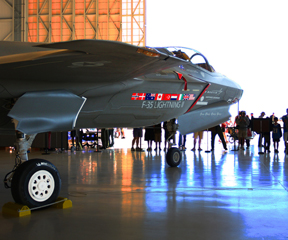 Blackwood, in an opinion given to city councilors Thursday, also said the city was unlikely to be held liable for any harm that might come from the planes being bedded down with the Vermont Air National Guard.

The opinion is a blow to F-35 opponents, who contend that city could be liable for legal damages in the event of harm caused by the basing. As landlord for the city-owned airport, opponents claimed the city has the authority to prohibit the Air Force from the basing the fighter jet.

F-35 opponents and Progressive members of the City Council have asked the council to oppose the jets.

Blackwood’s legal memo says that through existing agreements, the city does not have the authority to tell the Air Force how to use the airport for military flights.

“A city may be liable as an airport landlord for actions of its tenants under certain circumstances, but because in this situation it appears constitutionally unable to control the activities of the military, it is unlikely that a court could find the City liable for any harm caused,” she wrote.

Mayor Miro Weinberger issued a statement on the legal opinion thanking the city attorney for a comprehensive memo on the issue.

“Her work clarifies the decision before the City Council and exposes the inaccuracy of many of the claims made by anti-F-35 leaders in recent months,” Weinberger stated.

By accepting federal funding, which has totaled about $125 million since 1990, the city assures that all U.S. government planes have access to the airport, which would include the Air Force’s F-35. By breaching that assurance, the Federal Aviation Administration, the nation’s aviation authority, would likely deny pending and future federal funding for the airport.

She also wrote that the Air Force provides the city with fire and rescue services, which would likely be withdrawn if the city opposed the basing, as proponents have repeatedly stated.

The legal memo is not the city’s last legal position on the issue, Blackwood wrote.

The Secretary of the Air Force could make a decision as soon as Nov. 4 on the basing of the F-35. Last week, the council assured residents that the city will state its position on the topic before the end of a 30-day waiting period.

The Burlington Air National Guard station is still the preferred Guard alternative in line to receive 18 to 25 F-35 fighter jets to replace the current F-16s, as stated in the final Environmental Impact Statement, which is the last assessment of the possible environmental and health consequences of basing a fleet of F-35 fighter jets at two of six proposed locations in the U.S.

Thanks for reporting an error with the story, "Council can’t block F-35, Burlington city attorney says"