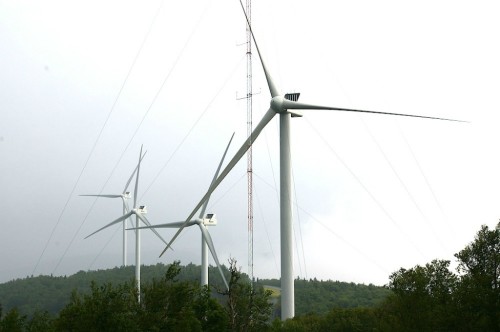 New England and Vermont power grid officials say that GMP’s 21-turbine wind project was ordered to reel in generation during a recent heat wave because the project is incomplete and is connected to a weak point in the grid.

This issue came to a head recently when New England’s demand for power hit historic highs. ISO New England — the grid operator — called on GMP to curtail power from the 64.5 megawatt (mW) project and instead fire up diesel generators across the state. Vermont Public Radio first highlighted the event.

July 18 marked the fourth-highest peak in ISO’s history, as New Englanders demanded 27,377 mW. During that heat wave, GMP spokeswoman Dottie Schnure said the Lowell wind project had the ability to generate roughly 45 mW per hour (mWh), but ISO allowed it to generate between 15 and 20 mWh.

Schnure said ISO curtailed the turbines numerous times during the week of July 18, while the grid’s load peaked above 24,000 mW. At the same time ISO curtailed the wind project, it also called on GMP to fire up its four jet turbines and six diesel engines located elsewhere around the state to match the high demand.

Instead of using wind power, GMP was required to use more carbon-heavy and expensive fuels because ISO officials say the infrastructure used to transmit power from Lowell is insufficient.

Darren Springer, deputy commissioner of the Public Service Department, said the curtailment situation is bad for ratepayer’s pocketbooks, and it is inhibiting the state from moving quickly toward its Comprehensive Energy Plan goal of drawing 90 percent of the state’s energy from renewable sources by 2050.

“In New England, we’re looking at wind in the very low digits, and we’re having these issues,” Springer said. “If we’re going to get to where we need to go, we need a grid and a grid operator that is willing to do everything they can to integrate these renewable sources.”

On Friday, Shumlin wrote to ISO New England CEO Gordon van Welie, encouraging him and his team to get on the same page with the state of Vermont.

“Vermont has a clear preference for renewable resources and would have preferred that the local renewable energy produced by this utility-owned resource had been used to meet regional power needs in the Northeast Kingdom and surrounding communities where homes and businesses were also experiencing a period of high demand last week,” Shumlin wrote.

Stephen Rourke, vice president of system planning for ISO New England, said the problem with the northern tier of Vermont’s grid is that there are numerous large-scale renewable energy projects feeding into a low voltage section of the transmission network. Intermittent power from Hydro-Quebec, and the Lowell and Sheffield wind projects is funneled through this older part of the grid.

“It’s really pretty simple: We can’t set the system up so that an overload would occur,” Rourke said. “There’s a limit to the amount of power we can transfer out of that area. … We always work to make sure the system runs in a reliable way. Having an event that could lead to a loss of customers is not a reliable outcome. So, we have to limit the amount of energy that the generators up in that part of the state are injecting into the network.”

Kerrick Johnson, the vice president of external affairs for VELCO, Vermont’s transmission utility, said on July 18, after a heavy rain the night before, the power coming in from the hydro dams in Quebec was at the interface’s maximum capacity.

“You have too much energy trying to get on too few lines,” Johnson said. “What happens is a voltage collapse, and you’d have to centrally cut off that area so that it wouldn’t black out other areas. Likely what would be one of the first negative impacts is that you’d start frying equipment.”

Another factor contributing to ISO’s frequent curtailments of the Lowell wind project is that GMP has not yet completed the construction of a synchronous condenser, which will be used to even out voltage from the intermittent wind plant. GMP doesn’t expect to complete this construction until the end of the year.

Marcia Blomberg, spokeswoman for ISO, said that without the condenser the Lowell project would continue to be the first project in the region to be curtailed.

“The ISO is operating the regional power grid in compliance with mandatory federal reliability standards. It is not possible to operate all of the resources in that area and remain in compliance with these standards under current system conditions,” Blomberg said. “A facility that has not completed system upgrades identified in its interconnection requirements would be backed down before other facilities in an area where curtailment is needed to ensure reliability.”

Blomberg said that another wind project in Vermont and one in Maine were also curtailed during Friday’s near record peak.

Thanks for reporting an error with the story, "Shumlin calls on grid operator to stop cutting Lowell wind power"