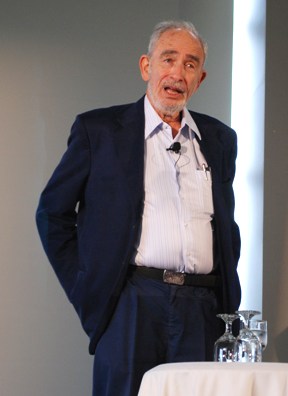 Paul Ehrlich spoke about the collapse of civilization due to environmental problems on Tuesday at the University of Vermont. Photo by Audrey Clark

The 81-year-old Ehrlich, a professor at Stanford University, spurred the growth of new fields of science and called attention to environmental problems through his work on overpopulation, evolutionary biology, and conservation. He addressed a packed ballroom at the University of Vermont on Tuesday.

Ehrlich, who paced back and forth across the stage, ignoring the podium, started by saying, “I believe and all of my colleagues believe that we are on a straightforward course to a collapse of our civilization.” He cited signs, such as diminishing returns from natural resources, that he said were recognizable from studying the collapse of other civilizations throughout history.

The problem can be traced to our evolution, said Ehrlich.

“We’re a small-group animal, both genetically and culturally. We have evolved to relate to groups of somewhere between 50 and 150 people,” he said. “And now suddenly we’re trying to live in a group not of 150 or 100 people, but of seven billion people, somewhat over seven billion people at the moment, and that is presenting us with a whole array of problems.”

Those problems include an inability to recognize gradual, large-scale changes in our environment as dangerous.

In contrast, our cultural evolution has not progressed much at all in terms of ethics, said Ehrlich.

Ehrlich, gesturing and joking with the audience, made frequent forays into insulting public figures and declaiming popular beliefs.

“Any of you ever watch the False News Network? Rupert Murdoch requires them not to say the word ‘climate’ on it. These are paid prostitutes and Rupert’s their pimp.”

Much of Ehrlich’s talk focused on environmental problems, including climate change.

“We’re facing climate disruption,” he said. “That is the most talked about environmental problem we face. It’s not necessarily the most serious. … It may be some of the others are even more serious. The global spread of toxic substances is getting worse every year.” Some substances are more dangerous to us in small quantities than large because of the way our cells process them, and we’ve spread these substances far and wide. “There’s already nasty signs about the effects. For instance in some sub-Arctic villages they’re having twice as many girl babies born as boy babies.”

“The first place I think that we ought to be concentrating if we’re going to solve the problem and avoid a collapse is to rework the entire agricultural system and move feeding people — which is really our most important activity as human beings — up to the top of the list of what we should be doing, not how many iPad new versions we can get in the next six months.”

Ehrlich said we are remarkably unprepared to deal with most of our environmental problems.

“Climate change we at least have nut-case solutions for. If it gets away from us, we can do what’s called geo-engineering. Absolutely insane, but we at least have insane ideas about what to do about it. Whereas if the chemicals we’re releasing give everybody bladder cancer by the time they’re four years old, we wouldn’t have the first clue what to do about it. … We’re basically sawing off the limb that we’re sitting on.”

“At this point I always need a little gin in my talk,” added Ehrlich, pausing to pour himself some water.

After speaking for 20 minutes about environmental problems, Ehrlich moved to solutions. He said we have to cut our fossil fuel use dramatically and completely redesign our water management infrastructure. If we don’t, changing precipitation patterns will make it impossible to feed everyone on Earth.

“We’re doing a crappy job of feeding people today, and yet we’re sitting in a society that with equanimity looks at adding another two and a half billion people to the seven billion people we’ve got already.”

“Nothing’s probably more important to the lives of Americans in the future to your grandchildren, your great-grandchildren, your children, maybe even you if you’re young enough, is how many people we have in this country and how much each one feels required to consume.”

So, said Ehrlich, we are faced with serious, interrelated problems with serious political and economic implications. What to do?

“The first place I think that we ought to be concentrating if we’re going to solve the problem and avoid a collapse is to rework the entire agricultural system and move feeding people — which is really our most important activity as human beings — up to the top of the list of what we should be doing, not how many iPad new versions we can get in the next six months.”

Ehrlich said we also need to concentrate on gradually slowing and then reversing population growth. The Earth’s carrying capacity is 1.5 billion people at the very most. To cut the global population from its current level to 1.5 billion, we need a fertility rate of 1.5 children per family.

“How do you do it humanely? Well, first thing you do is work very hard to get every woman on the planet exactly the same rights, opportunities, pay, and so on as every man. When women get rights, birth rates go down.” Next, promote birth control. “Those two things alone would go far to solve the population problem.”

The problem of overconsumption, Ehrlich said, could be solved almost instantly, given the right government. As an example, he mentioned how quickly the U.S. switched from producing cars to manufacturing tanks during World War II.

Despite giving a speech bulging with data, Ehrlich cautioned that telling people about the problems doesn’t change their behavior. Citing social science research, he said that when you tell people everyone else is doing it, and especially that everyone else in their neighborhood is doing it, that’s when their behavior changes. The way to change behavior is peer pressure.

After an hour-long talk about all the reasons why a collapse of civilization is likely and how hard it will be to prevent, Ehrlich offered one iota of hope: “If there’s any reason for hope, it’s that we do have a history of showing that human beings, human societies, in relatively recent times can change extremely dramatically, extremely rapidly.”

Ehrlich went on, “For some reason — we don’t fully understand it — when the time is right, you can get dramatic, dramatic changes, which indicates to me that there’s a chance that when the time is right, we can change the way we behave towards each other and towards our environment and it can happen very very rapidly. I think … your main challenge is to find a way to ripen the time.”

What does Ehrlich think of Vermont?

“I think it’s way ahead of the game. You’re very lucky because you have New Hampshire next door for contrast. You know, brilliance on one side, idiocy on the other. … Having the Gund Institute here, having the Population Media Center here, having a generally environmentally conscious population, not being nuts for guns, you know there are a lot of advantages to being in Vermont.”

Thanks for reporting an error with the story, "Biologist Paul Ehrlich gives dire prediction for global civilization"