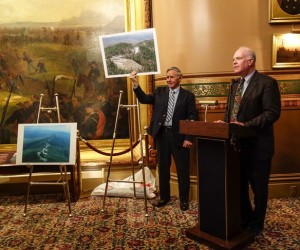 Vermont businesses and renewable energy advocates are coming out in strong opposition to a Senate bill that would change how large wind and other energy generation projects are permitted in the Green Mountain State.

The letter, which was spearheaded by the trade organization Renewable Energy Vermont, cautioned that the bill “hangs a sign on the door of Vermont saying, ‘no renewable energy jobs or projects welcome here.’”

The linchpin of the draft bill requires applicants of energy generation projects greater than 500 kilowatts (kW) to conform to Act 250 criteria. Act 250 is the state’s governing land-use law and relies heavily on town plans, giving municipalities a greater say over the permitting process.

The bill is set to hit the Senate floor on Wednesday, and opposition is mounting.

Jeffery Wolfe founded the large-scale solar company groSolar and sits on the national advisory board for the Union of Concerned Scientists. 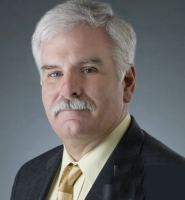 Last week, Wolfe told President Pro Tem John Campbell, D-Windsor, in an email that if he continued to support S.30, he could expect some serious political backlash.

“John, I've supported you for a lot of races,” Wolfe wrote. “But if you support this bill, not only does that support end, but I will help recruit and support opposition to you in the next election, and will put my money where my mouth is.

“I'm not a single issue voter, but this one bill, because it sets back action on climate change, affects almost every issue I care about. Middle class prosperity, human health, environmental health, recreation, are all negatively affected by this bill.”

Wolfe, who lives in Strafford and is involved in the Democratic Party, told VTDigger that he hasn’t contributed significant dollars to Campbell’s campaigns, but he has created numerous jobs in Campbell’s Senate district.

“John has never once voiced a complaint with solar or wind energy to me,” he said. “It sort of appears he’s willing to take when it’s good but not stand up when it’s under fire.”

Campbell did not immediately return a request for comment. The Senate President Pro Tem is an anti-wind proponent, though it's likely he will not be able to vote on S.30 when the bill comes to the floor this week as Lt. Gov. Phil Scott is away, and Campbell will have to preside over the Senate.

“It is inconsistent with the will of Vermonters, the business community and the state’s renewable energy goals,” VBSR wrote. Sen. Bob Hartwell, D-Bennington, who co-sponsored the original bill and chairs the Senate Natural Resources and Energy Committee, disagrees with this assertion.

“This is not a problem for business development at all,” he said. “This is putting Vermonters in control of their own fate and putting a proper process in place to determine where the best places are for projects to go.”

The bill and the “burden”

Hartwell and Sen. Joe Benning, R-Caledonia, introduced S.30 at the outset of the session.

Gov. Peter Shumlin acknowledged the latter of these two issues and created a siting commission to assess this process in the fall of last year.

“This process has not included people and assessed impacts well,” Hartwell said.

The initial bill that Hartwell and Benning introduced included a three-year moratorium on the development of wind turbine projects with a production capacity greater than 500 kW. But the version of the bill that passed out of the Senate Natural Resources and Energy Committee at the end of Feburary did not include that controversial provision.

The draft that is headed to the Senate floor this week would require the Public Service Board to mandate conformance to Act 250 criteria when approving the siting of energy projects larger than 500 kW.

The legislation also prohibits the construction of any commercial or electric generation projects on state forests, and it sets aside $75,000 for the Public Service Department to oversee various assessments on potential economic, health and environmental matters associated with large-scale wind generation plants.

Wolfe said his primary qualm with the bill is the added burden it places on renewable energy generation applicants.

The state’s comprehensive energy plan, which was adopted in 2011, set a goal of shifting 90 percent of the state’s energy portfolio to renewables by 2050.

Dan Barlow, who lobbies for VBSR, articulated similar sentiments to Wolfe, saying the state should continue on its current path.

“It’s good to have aggressive goals,” he said. “Placing additional regulatory burdens on renewable energy generators in Vermont will slow this progress.”

The amendments on the table

At least three “strike-all” amendments that would rewrite S.30 will be on the Senate’s menu on Wednesday.

The first of the strike-all amendments will come from Hartwell’s committee. He says the new version of the bill is meant to streamline its language.

The current iteration of that amendment, which is subject to change, does not mandate Act 250 conformance. It would, however, require energy generation projects to adhere to town plans.

Chittenden County Democratic Sens. Tim Ashe and Ginny Lyons are each proposing amendments that would take the bill in different directions, and neither proposes additional regulations that would involve towns more. Both drafts call on the Legislature to wait until further analysis on the issue has been conducted.

Lyons’ amendment would require the Joint Energy Committee to prepare a report by Dec. 1 that recommends energy siting policies based on the findings of the governor’s siting commission, the state’s comprehensive energy plan, VELCO’s transmission plan, Act 250 rules, as well as other policies.

Ashe’s amendment calls for the creation of a Joint Energy and Public Service Oversight Committee, comprised of five representatives and five senators, to replace the Joint Energy Committee. This committee would review energy and utility matters and would also be charged with submitting a report to legislative committees about the siting commission’s findings, the state’s renewable energy sector and ways to improve public participation in the siting review process.

Hartwell said that he is open to these proposals, but he feels that there needs to be a policy that gives localities greater power over the siting process until a permanent solution to these procedures is agreed on by the Legislature.

Thanks for reporting an error with the story, "Business blowback over proposed wind and energy bill"