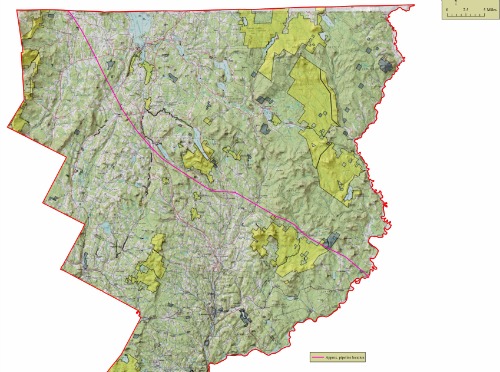 Editor’s note: A companion story to this piece, Environmental groups push for preemptive halt to oil transit, by Alan Panebaker, was published on VTDigger.org today.

New England environmental groups are sounding the alarm over a Canadian oil company’s plan to bring tar sands oil from Alberta to refineries in Eastern Canada. Environmentalists believe the proposal by Enbridge Oil is the first step in a long-range plan to move tar sands oil through Vermont’s Northeast Kingdom and New Hampshire to Portland, Maine, for export. The oil company says, “There is no active plan at this point."

In a statement, an Enbridge spokesman, citing their pipeline that runs between Sarnia, Ontario, to Montreal, Quebec, says it does not go further east. “The projects Enbridge have currently proposed for Line 9 are limited to the reversal of this line, which terminates in Montreal. There is a pipeline between Montreal and Portland, Maine, but it is not owned by Enbridge; any decisions related to this pipeline would be for that company to make."

It’s believed that the oil that will move east from Alberta will be tar sands oil. The technique has allowed for the capture of previously untouched oil deposits, but it is also estimated by environmentalists to take between 14 percent and 20 percent more energy than the extraction of conventional oil.

“Oil is already incredibly dirty and tar sands are that much worse,” said Ben Walsh, clean energy advocate for the Vermont Public Interest Research Group. “Tar sands is to oil as fracking is to natural gas, and Vermont just banned fracking.”

Exporting oil is the new thing

Currently, a pipeline exists that brings imported oil from Portland to refineries in Montreal. Environmentalists warn that the pipeline reversals in Canada signal an attempt by the oil company to revive a 2008 plan to export tar sands oil through Portland. The plan, dubbed Trailbreaker, would reverse the flow of the pipelines between Alberta and Portland.

“They put a very clear plan out in 2008, when tar sands oil really wasn’t on anyone’s radar screen,” said Jim Murphy, a Vermont wetlands and water resources lawyer with the National Wildlife Federation’s Northeast Regional Center in Montpelier. “Then the economy tanked.”

Since then, environmentalists have mobilized to oppose tar sands oil. They argue that the emissions from the fossil fuel energy needed to extract the oil dangerously accelerate climate change. In the U.S., there was a large grassroots push to pressure President Barack Obama to not fast-track the authorization of the Keystone XL pipeline, which would connect Alberta oil to refineries in the Gulf of Mexico; President Obama declined to fast-track the project. Also, an Enbridge plan to create a new pipeline from Alberta to British Columbia has run into logistical hurdles and has met stiff resistance from some tribes of the Canadian First Nations.

But Canadian Prime Minister Stephen Harper’s administration favors more development of the tar sands oil industry, and industry analysts say the demand for the oil is unmistakable. Because the oil is extracted closer to home, it can be refined at a discount, said Andy Black, president of the Association of Oil Pipe Lines. Increased Canadian oil and natural gas production is causing pipeline owners in Texas, Oklahoma and the Great Lakes region to rethink which way oil should flow.

“It’s cheaper to reverse a pipeline than produce a new pipeline,” said Black. “Pipeline operators are trying to think creatively about ways to meet demand.”

Environmental groups believe that connecting the dots between Enbridge’s recent moves shows that the big picture is a plan to move tar sands oil through Vermont. For example, they point to Enbridge’s little-noticed court battle in Quebec over the construction of a new pipeline pumping station close to the Vermont border. Environmentalists argue the pumping station is only necessary if the company plans to reverse more of the line than is being announced.

The Quebec provincial government has twice denied the application on procedural grounds, but Enbridge is expected to reapply, they say. An Enbridge spokesman said he was currently too unfamiliar with the pumping station project to comment.

Also, environmentalists argue that if Enbridge goes through with the flow reversal of its Canadian pipelines, then it would create an expensive redundancy in its pipeline system. Currently, the Portland-Montreal pipeline pumps some 170,000 barrels of imported oil a day, but the pipeline system has the capacity to carry more than twice that. Meanwhile, the Montreal refineries can’t handle much more than the amount already piped from Portland, Murphy says, adding that exporting oil seems the only way to make the plan worthwhile and that Enbridge is taking an incremental approach only to avoid public alarm over the idea.

“There’s really not much other explanation for the piecemeal approach to the project that exists,” he concludes.

Environmentalists also fear the decades-old pipeline isn’t equipped to handle tar sands oil, which they argue is more toxic, has more sediment and flows at a higher temperature inside the pipeline. They worry a break could endanger New England’s waterways, including Crystal Lake and the Connecticut River. Enbridge has come under fire for its handling of a recent 800,000-gallon spill of tar sands oil in Michigan’s Kalamazoo River. Its engineers apparently misread the problem as one of low pressure in the pipeline.

“It took the company about 12 to 15 hours to really notice there was a spill. In the meantime, they put the foot on the gas, pumping-wise,” Murphy said.

But he refused to speculate on the future of the Montreal and Portland pipelines, saying they were independently owned. Ted O’Meara, a spokesman for the Portland Pipeline, said there was no active plan to reverse the flow of the pipeline, but also that the company wasn’t immediately concerned about Enbridge’s move to bring more oil to the Montreal refineries. O’Meara said there is more potential for refinery capacity in Montreal than is currently estimated, but to comment further would be pure speculation.

But environmentalists throughout New England remain unconvinced by the denials and are using protests and publicity campaigns to raise awareness about an eventual move by Enbridge to propose bringing tar sands oil through New England.

“There is an overwhelming market drive to get that oil out,” said Dylan Voorhees, clean energy project director of the National Resources Council of Maine. “This is really coming. It’s just a matter of time.”

Thanks for reporting an error with the story, "Will tar sands oil flow through Vermont?"