Editor’s note: This is the first story in a two-part series. The second article will run tomorrow. 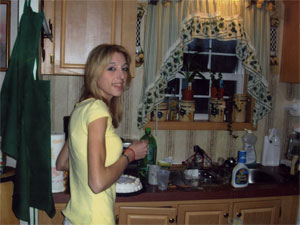 “It is a pretty blatant and obvious and extreme case of gross negligence,” said Seth Lipschutz, supervising attorney at the Vermont Defender General’s office. “We figured out in a day that they killed her.”

It is reasonable to create a picture that people receiving the order [for meds] didn’t understand the full context. Communication of a medical problem, and the reason for the order, didn’t rise to the level of urgency that it appeared it should have.”
Dr. John Leppman
PHS Physician

In January, when Tennessee-based Prison Health Services (PHS) leaves Vermont under a cloud, the state plans to hire the fifth private company in 14 years to run its inmate health care system. The contract under consideration will be expanded to absorb mental health functions.

The tragic death of Ashley Ellis throws the nature of this conflict into sharp relief.

Ellis, who was 5 foot 6 inches tall, weighed just 87 pounds the day her grandmother drove her past dairy farms and corn fields to the rings of chain link and razor wire that wrap Northwest State Correctional Facility in Swanton. The 23-year-old Rutland resident was “gaunt and haggard,” according to a news report, when she was sentenced last August. Ellis was ordered to report to prison two days later, although her public defender had begged for no jail time for the July 2007 accident: Traffic accidents aren’t crimes, argued Mary Kay Lanthier, insisting that her client was just too sick for prison.

Rutland District Court Judge Thomas Zonay, ignoring or ignorant of the prison’s bare-bones medical staffing on weekends, ordered Ellis to report to the 160-bed red brick prison, just south of the Canadian border on Aug. 14, a Friday before a three-day weekend. Judge Zonay declined to be interviewed for this story. 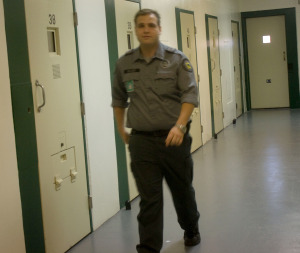 A guard walks past cell number 40, where Ashley Ellis was incarcerated on Aug. 16, the day she died. Photo by Terry J. Allen

From the moment Ellis entered the bleak intake room with its two barred cells her life was in the hands of a company with a cross-country rap sheet that is spattered with deaths, lawsuits, millions of dollars in fines and settlements and numerous investigations. A 2005 three-part New York Times investigation found PHS’s care “flawed and sometimes lethal.” The company, the paper noted, has “hopscotched from place to place, largely unscathed by accusations that in cutting costs, it has cut corners.”

Ellis’ doctor and her lawyer had alerted the prison to the young woman’s fragile health. Police reports and state investigators confirm that days in advance of her incarceration, Ellis’ doctor, Michael Garcia, faxed her health records to Dr. Delores Burroughs-Biron, head of Department of Corrections (DOC) Health Services. The extensive document detailed her serious anorexia/bulimia nervosa and her need for frequent meals, and most importantly, the regular potassium supplements meant to prevent her heart from shutting down.

No one competent to assess her health was present at Ellis’s medical intake. There was no doctor at the facility, and only one RN (for one shift) during the nearly two days Ellis survived in jail, according to DOC records. Nursing at Northwest on weekends—5 p.m. Friday to 7 a.m. Monday—by contract is light and assigned to licensed practical nurses. LPNs, who typically study for one year, are barred by state nursing regulations from assessing patients, and may not have had the training to understand how critically ill Ellis was.

Ellis, who never got the prescribed potassium, was found dying in her cell at 6:30 a.m. Sunday, according to the police report. An autopsy determined the cause of death as hypokalemic (potassium deficiency) induced cardiac arrhythmia caused by a denial of access to medication.

PHS’ public relations firm issued a statement that Ellis “received care that met applicable standards … and PHS did not deny her access to medications.” The corporation has declined to say more.

At the same time, Franklin County State’s Attorney Jim Hughes chose not to prosecute, saying his “decision was to seek no charges against any individuals in the case.” Sandra Gipe, Ellis’ grandmother, says she is “not mad that they didn’t charge one person; there were a lot of people who didn’t do their job.”

For the state’s part, no agency has decided to go after PHS, either. Although a corporation can be charged with a crime, Vermont’s Defender General Matthew Valerio told the St. Albans Messenger, “I think that it would be difficult” for the state’s attorney’s office to have the resources to prosecute a corporation.

Ellis’ family, meanwhile, is looking into a civil suit, and has hired the Rutland law firm Kenlan, Schwiebert, Facey & Goss to review the death.

PHS is well practiced in paying off lawsuits as a cost of doing business. “It’s in their interest to provide inadequate care, and take lumps when sued,” said the defender general, attorney Lipschutz. And when things get really dicey, PHS simply leaves, “thus preserving its marketable claim that it has never been let go for cause, ” The New York Times reported almost five years ago.

The current contract between PHS and Vermont expires on Jan. 31, and the four-year relationship is ending with a volley of I-quit/Don’t-bother-to-reapply exchanges.

When Ellis entered prison that Friday afternoon of Aug. 14, Wayne Hojaboom,an LPN, conducted the medical intake. He later told police that he had been given “no prior information” about Ellis’ condition.

Burroughs-Biron said that “there should be an intake screening and assessment as soon possible, immediately.” Asked why an LPN—not legally qualified to assess patients—was given this role, she rephrased: “There should be a screening that is not assessment.”

On Wednesday, two days before Ellis arrived at the prison, Burroughs-Biron faxed Ellis’s medical records, including the drug orders, to Northwest’s clinical coordinator, Renee Trombley, an LPN. The police report details what ensued next, with disastrous consequences: a perfect storm of poor decisions and inadequate staffing coupled with a cumbersome bureaucracy and a breakdown in communications.

Trombley said that she received the meds order. But, she told police investigators, she got too busy because of a staffing shortage. After a nurse on the Friday shift “did not show up,” Trombley asked Dr. Burroughs-Biron to excuse her from a meeting in Waterbury so she would not leave just one nurse at the facility, and so she would have time to fill in for the missing nurse. Trombley told police that Burroughs-Biron denied her request, and that was why “she didn’t have a chance on Friday to follow up on Ellis’ medication.” Neither Burroughs-Biron nor Trombley would comment on the police statement.

On Saturday, when LPN Connie Hall showed up at 6 a.m. for her 12-hour shift, and reviewed the day’s medical charts, she told police that she called Dr. John Leppman, the only PHS physician in the state on call that weekend. He faxed an order to Hall for Ellis to receive folic acid, potassium and Tums.

Since the prison had no potassium in stock, Hall left a cell phone message for nurse Karen Hough, who was scheduled for the 6 p.m. shift, asking her to stop at the local drug store on her way in. But Hough, according to the police report, did not check her messages, and arrived at Northwest on Saturday evening just before the Rite Aid closed for the night. Hough, police say, quit her job after Ellis died.

“It is reasonable to create a picture that people receiving the order [for meds] didn’t understand the full context,” said the PHS’s on-call physician Leppman. “Communication of a medical problem, and the reason for the order, didn’t rise to the level of urgency that it appeared it should have.

“I never got [Ellis’] medical reports, never asked for the reports,” Leppman said. “I was not on the distribution list, and didn’t have access to the information.”

By Saturday, Ellis was desperately trying to communicate the urgency of her need. She begged so often and fervently for potassium that the corrections officers nicknamed her “Potassium Girl.”

She had been hospitalized previously for eating disorders and knew the danger signs. In a sick call request form she wrote but apparently never filed, Ellis pleaded, according to the police report, that “she could have a heart attack or die if her potassium gets too low.”

One corrections officer had taken pity on the emaciated woman and violated rules to make her a peanut butter and jelly sandwich, according to Darla Lawton, an investigator with the Defender General’s office. Another CO said angrily that a person as fragile as Ellis should have been hospitalized—not incarcerated. He described Ellis as “a skeleton,” adding, “I have never seen anyone in that condition.”

By 9 p.m., an hour before lockdown that Saturday, Ellis complained that she felt unwell and went to bed in her one-person cell. Her grandmother, Sandra Gipe, remarked in an interview, “Ashley was someone who needed help so much, and no one helped her.”

By Sunday morning, Ellis’ potassium levels must have been critically low. According to Lawton, the police and other sources, when a corrections officer came to collect her breakfast tray, the inmate, who had been alert a half-hour before, lay crumpled on her bunk. Her eyes were fixed and staring, her mouth contained unswallowed food. A “Medical 33” call echoed through the prison, and within minutes, a CO applied the Heimlich maneuver and nurse Connie Hall did a mouth sweep. But the problem, the autopsy determined, was not the food Ellis had eaten, but medication she was denied.

“At first, there was no [protective] mask for mouth-to-mouth resuscitation,” said Darla Lawton, an investigator, “so Connie went ahead without it.” Hall and the corrections officer alternated for 10 to 15 minutes with chest compressions and breathing, trying desperately to establish a pulse.

Up and down Delta Block, locked-in inmates, riveted by the unfolding tragedy in cell 40, pressed against the small windows in the steel doors of their cells. Most of Vermont’s incarcerated women are short-timers, picked up for petty financial crimes, says David Turner the superintendent for Northwest. Sunday, Aug. 16, happened to be the first day he served in that post.

An ambulance crew arrived and took Ellis to the hospital where she was pronounced dead at 7:35 a.m.

Lipschutz called Ellis’ death “Just another example of the maxim: ‘We don’t care. We don’t have to.’”

Editor’s note: A much shorter version of this story appeared on the Web site In These Times. Thanks for reporting an error with the story, "Part I, Dying in Cell 40: Flaws in Vermont’s prison medical sys..."

Vermont percentage of unemployed women higher than any other state