Massachusetts and Connecticut have pulled out of a regional initiative designed to curb transportation emissions, halting any immediate prospect that Vermont could participate in the program.

The Vermont Climate Council was counting on the state to join the Transportation and Climate Initiative Program, as its projected impact was critical to meeting the goals outlined in the Global Warming Solutions Act. The council must publish the state’s first Climate Action Plan on Dec. 1.

With the climate council racing toward its deadline next week, Johanna Miller, a council member from the Vermont Natural Resources Council who works on transportation initiatives, called the news “terrible timing.”

“We’re regrouping, and assessing, and then setting a step plan in place for how we are going to thoughtfully consider different options,” Miller said.

In December 2020, Connecticut, Massachusetts, Rhode Island and the District of Columbia pledged to participate in the program, commonly referred to as TCI-P.

The cap-and-trade program would set a limit for transportation-related carbon emissions. Fuel suppliers would purchase emissions allowances at auction, based on the amount of fuel they would sell in each state. The cap would decline over time, and each participating jurisdiction would put the funds toward green transportation infrastructure.

The program was expected to reduce emissions in participating states by 26% over the next decade, and Vermont was expected to receive around $19 million in revenue in the program’s first year. That figure would increase “to up to $27 million per year in 2032,” according to a recent study by the Energy Action Network.

Vermont is legally required to reduce its emissions by 26% from 2005 levels by 2025. The transportation sector accounts for the largest percentage of Vermont’s carbon emissions at 40%. Fossil fuels power 94% of the state’s transportation.

Connecticut Gov. Ned Lamont, a Democrat, and Massachusetts Gov. Charlie Baker, a Republican, pulled their states out of the program last week, citing already-high gas prices, an influx of federal infrastructure money and a lack of commitment from other states.

That prompted a rebuke from five statewide environmental organizations in Vermont, which said in a statement that Lamont’s and Baker’s announcements “have put the future of the TCI-Program in question — and have created significant uncertainty related to how the impending (Climate Action Plan) outlines a clear path forward for required emissions reductions.”

“This extremely disappointing development ignores our state, regional and national climate commitments,” the environmental groups said. “It also ignores broad public support across the region for TCI-P, as confirmed by multiple independent polls and the groundswell of support expressed during the TCI public comment period.”

Massachusetts pulled out of the program because of a lack of commitment from other states, and because federal dollars have given the state a source of funding for infrastructure projects that the TCI-P would have otherwise funded, Baker’s press secretary, Terry MacCormack, said in a statement to VTDigger.

Lamont’s office did not respond to a request for comment. He told reporters during a press conference that the surging gas prices were partly to blame for his decision, according to the CT Examiner.

The statement from Vermont’s environmental groups pushed back on both sentiments — TCI-P would provide a long-term source of funding for clean transportation projects, while the federal funds could act as a “down payment.”

“Meanwhile, the price volatility of gasoline and diesel present a compelling reason for our states to move away from fossil-fueled transportation, not double down on it,” the statement said.

The program “would result in an average additional cost per household ranging from $21 to $29 in the first year, depending on household income,” in Vermont, according to the Energy Action Network.

Over a decade, the TCI-P has gone through an in-depth process to explore how it would work in the region, Miller said.

A yearlong process reiterating that decades’ worth of work and engaging stakeholders had “put TCI-P back on the table as a really important lever to reduce emissions in the state,” Miller said.

Now, the climate council must go “back to the drawing board” to find other tools that could take its place. But any of those considerations will take time, Miller said, emphasizing that the situation is urgent.

“There’s significant opportunities in a state like Vermont that imports every drip of liquid fossil fuels that we largely use to heat our homes and get where we need to go to do things a different way,” she said. “But we’ve got to be really thoughtful about that.”

It’s possible that the TCI-P could be revived, Miller said, but the council “cannot count on the resuscitation of it,” she said. “At this moment, we need to put together a plan.”

The environmental organizations said the forthcoming Climate Action Plan should acknowledge the potential that the program could be revitalized.

However, “without TCI-P or a commitment to other actions that achieve the same scale of pollution reduction and investment in alternative solutions, it’s doubtful that Vermont can fulfill its emissions reductions requirements codified by the Global Warming Solutions Act,” the statement said.

Thanks for reporting an error with the story, "Transportation pact crumbles as 2 states leave, striking a blow to Ve..." 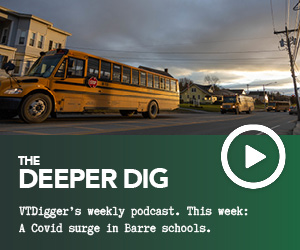