The large, fuzzy caterpillars hang off the maple trees in front of Mike Isham’s farmhouse in Williston. The bitten, lace-like leaves on the outer edges of the trees are beginning to show signs of the caterpillars’ appetite. Isham plucks a fuzzy caterpillar off a silken strand and feeds it to one of his chickens, his primary source of pest control on the farm.

Vermont is facing its largest gypsy moth outbreak in 30 years.

The main problem with an outbreak is the gypsy moth caterpillars are aggressive leaf-eaters during the weeks they grow and molt and prepare to transform into moths. Experts describe them as early season defoliators, which means they can strip trees of their leaves in early summer.

But Isham isn’t panicking, and neither is Margaret Skinner, an entomologist — or insect scientist — at UVM Extension.

“Trees are pretty darn resilient. They have gone through this before,” Skinner said. “That’s why they live so long. They’ve developed ways to bounce back.”

Gypsy moths are not a new invasive species. They were accidentally introduced into the United States in 1869, but have hung around in the habitat since then.

Josh Halman, a forest health specialist at Vermont Department of Forests, Parks and Recreation, said it seems the outbreak is mostly affecting the northwest part of the state.

“I’ve had reports come in from as far north as Highgate, and as far south as the Rutland area,” he said. “It kind of seems to be in that Champlain Valley area, going east up to the foothills of the Green Mountains.”

Both Halman and Skinner said their grasp on the scope of the outbreak is mostly based on calls from residents. There’s no statewide survey on the moth’s prevalence, but similar outbreaks have been reported in Michigan, upstate New York, Ontario and elsewhere.

Skinner and Halman said there isn’t research to truly explain the gypsy moth explosion this year. But both point out that the past couple of years of dry weather likely diminished the fungus that kills gypsy moth larvae and usually acts as a natural population check.

Gypsy moths can survive in more than 300 species of host trees. Halman said gypsy moths “like oak leaves best of all,” but are also common in maple, poplar or pine trees. They can also live in fruit trees or bushes, but don’t really affect smaller plants like vegetables.

Both Halman and Skinner urge residents not to panic. One year without leaves generally won’t kill a tree, and Halman points out that many trees can actually regrow their canopy of leaves within the summer.

“The trees will survive one year of defoliating,” Isham said. “The second year is more critical. I think the trees have a lot of reserve.”

If people are particularly concerned about smaller trees in their yards, Skinner tells them to provide lots of water. Minimizing other stressors on trees, like drought, will help them recover. She also emphasizes there’s no need to cut down trees just because of leaf damage.

Skinner said the caterpillars crawl up into the leaves of the tree at night, and then they crawl back down and hide in flaps of tree bark during the day. They’ll sometimes do the same thing on houses, where they’re extra visible, but they’re not actually trying to get into the building.

“They might come in by accident, but they don’t necessarily want to come in seeking out anything in the house,” Skinner said.

There are a couple of options for people who want to take a more proactive approach against the caterpillars in their trees:

For caterpillars on the side of a house, Skinner recommends using an industrial wet/dry vacuum with a bit of soapy water at the bottom.

“You have to do it every single day for any impact at all,” she said.

Gypsy moth aerial spray will take place today, Thursday, June 3rd, in Barron and Washburn counties.
To learn more about this year’s treatment plan or to view maps of treatment areas, visit us at https://t.co/mubXMuVitc pic.twitter.com/Zh9QgkmypX

Power washing the caterpillars off is not very effective, Skinner said, unless coupled with a dunk in soapy water to kill them. She also recommended that allergy-prone people wear long sleeves while handling the caterpillars, as the hairs can sometimes cause a mild rash.

Other areas, like Wisconsin, have sprayed swaths of trees with insecticides to try to control the gypsy moth population, but Halman says gypsy moths in Vermont are too far along in their development for sprays to be effective.

That also means that the outbreak in Vermont is closer to being over.

“They’re not going to be feeding all summer long,” Halman said. “They’ll probably feed for another month or so.”

At that point, the caterpillars will pupate, become moths, and stop being much of a problem.

“The damage wouldn’t be continuing throughout the grilling season,” he said. “This is something … that should come to a close in the next month or so.”

Thanks for reporting an error with the story, "Vermont is facing its biggest gypsy moth outbreak in decades" 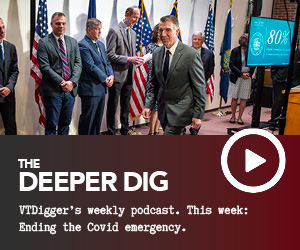 Carol Frenier: ‘No neutral place from which to view the world’