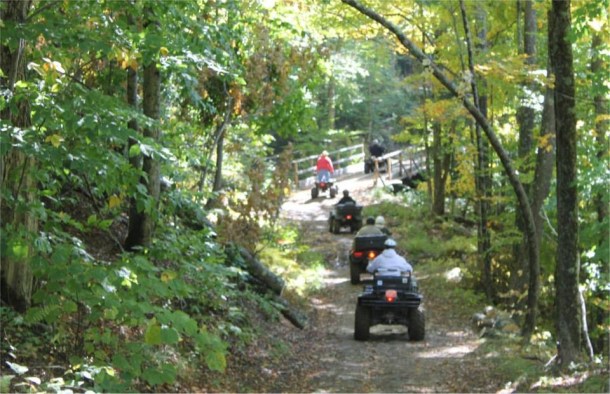 CRAFTSBURY — In his three decades of experience on the Selectboard, Chair Bruce Urie has never seen the town so staunchly divided.

“We have the yeses and nos, and we have the ones in between, and nobody’s talking,” Urie said, standing before a recent town hall crowd that would peak at more than three dozen. “It’s the first time in 30 years on the Selectboard that I’ve found that nobody’s talking in this town.”

The community is one of several across the Northeast Kingdom this year to look at allowing ATV use on municipal roads. 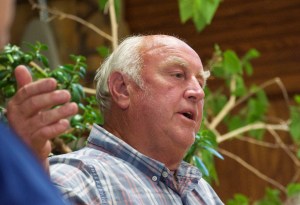 Canaan’s Selectboard passed one in March. The boards in Montgomery and Holland both discussed expanding their policies this spring. Hardwick added more roads to its ordinance in May, and Sutton has a hearing scheduled for September to discuss the same.

In May, Craftsbury passed a temporary ordinance that opened all town roads to ATVs, except for several listed. Voters shot it down Tuesday, 109-86.

ATV riders argue for freedom of movement with their vehicles of choice. They say traffic along the trails brings more people to local businesses and peg four-wheelers as another addition to Vermont’s recreation economy.

Statewide advocates want ATV ordinances so riders can more easily get between trails, since town roads sometimes come between trailheads.

Those opposed to ATVs on town roads bring up safety concerns, complaints about the noise of the machines, fears that the vehicles could overrun streets and worries of damage to public and private land.

Some say the debate raises deeper questions of Vermont’s identity, too.

“We have to figure out the balancing act so that it’s right for everyone.”

Craftsbury’s situation illustrates how delicate that balancing act can be.

Take the vote on Tuesday: It was prompted by a petition, not from people who opposed expanding ATV access, but from riders who found the ordinance too restrictive.

“All Town roads open, posted speed limit of road, no time restrictions,” reads a handwritten letter attached to the petition, signed by 71 people in May.

With the vote, the town goes back to its previous ATV policy, which allowed limited access on three roads, according to the 2016 town plan.

He said ATVers in town want to use their machines like any other vehicle. After all, he said, they pay taxes for town roads, so why shouldn’t they be allowed to travel on them? 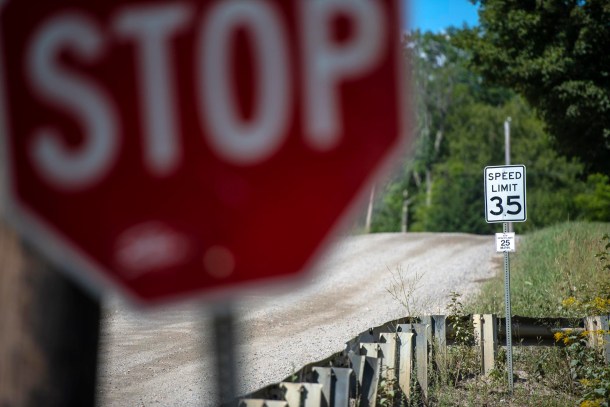 A speed limit sign for ATV’s joins a traditional sign near the intersection of South Wheelock Road and Minister Hill Road in Wheelock on Thursday. Photo by Glenn Russell/VTDigger

“We’d like to give people the right to go, and as long as they’re courteous and obey the rules of the road, they should be allowed to have the privilege,” he said.

Fellow resident Gina Campoli didn’t support the temporary ordinance, either. But not because it was overbearing.

Smith told townspeople that state police would respond to fatal or serious accidents and investigate non-ATV property damage totaling more than $100. They’d refer calls for speeding or noise to the local government or sheriff’s department, he said.

But Craftsbury doesn’t contract for service with the Orleans County Sheriff’s Department.

Urie, the Selectboard chair, said at a meeting Aug. 6 that the town constable could handle enforcement, though he’s not in Craftsbury every day. And residents could submit complaint forms to the board, Urie said.

Other than the constable and complaint forms, the law would have relied on ATV riders to police themselves. Some residents said putting the onus on onlookers isn’t realistic.

“I mean, ATV riders go by — there’s no way to know if they’re registered, if they’re licensed, even if they’re wearing a helmet,” resident Peggy Sapphire said. “Some of them speed by so fast, you can’t take that all in.” 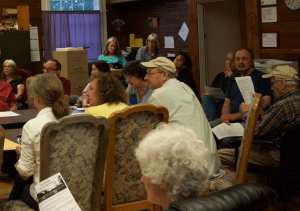 Craftsbury residents voted last week on an ordinance to regulate the use of ATVs on town roads. Photo by Justin Trombly/VTDigger

Cindi Bollettieri owns a farm and rental home Wylie Hill Road in Craftsbury. She wonders where self-policing ATVers were when, she said, a group of people drove ATVs to her private pond in the early hours of the morning this summer and threw a party.

Another day a teenage rider flashed by so fast she couldn’t see his plate or snap a clear photo, she said.

“We’ve become a racetrack here for these ATVs,” she said.

Bollettieri believed the riders came from neighboring towns, and while the local enthusiasts she’s encountered have been respectful, she worries that opening roads in Craftsbury would draw more outsiders.

She markets her rental unit as a peaceful escape in Vermont’s countryside and said that reckless riders could disrupt that promise.

“Who wants to come and experience Vermont when ATVs are racing each other up and down on the road and are on our property in the middle of the night?” she asked. “That’s not quintessential Vermont.”

Riders have role in enforcement

In some towns, the Vermont ATV Sportsman’s Association helps with policing. Danville’s ATV ordinance, adopted in 2016, says the group’s local affiliate club must give the town funds each year so it can contract with law enforcement agencies.

But Craftsbury board members wrote their ordinance without involving the association. Urie said at the Aug. 6 meeting that partnering with the organization could draw more riders than some residents want to see. 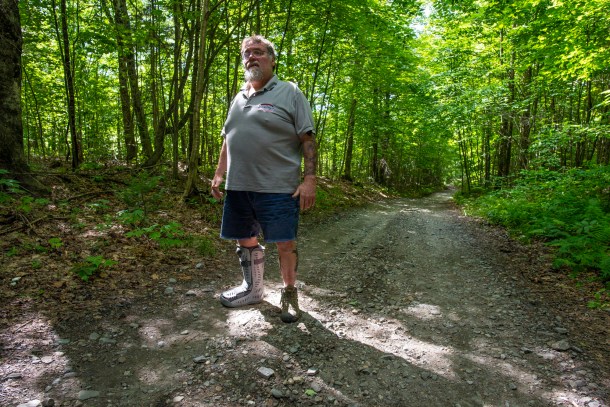 Hale, the group’s executive director, said he discourages towns from opening roads to ATVs without an affiliated-club presence.

That presence is often what makes the ordinances work, he said, as it allows for better regulation between riders and because the organization contracts with local enforcement agencies and the state Department of Fish and Wildlife.

He said fears that riders will run rampant — or that his organization is trying to “take over” Vermont by securing road passage in every town — are unfounded.

“This is being driven by the community members, that’s where this is coming from,” he said. “This is folks in the community saying, ‘We want to have access to the trail system.’”

The temporary ordinance in Craftsbury set a 30-mph speed limit for the vehicles on town roads. Riders like Goodridge think the low, universal limit would have been more dangerous than letting ATVs follow posted speed limits.

“We just figured it would actually be a safety thing, too, with traffic coming up behind them,” Goodridge said.

Craftsbury residents brought up harm to property, too. Bollettieri said that riders had damaged her waterfront by using it for jumps.

Charlie Hancock, chair of the Montgomery Selectboard, said that when his town discussed adding another road to its ordinance at the ATV association’s request, one consideration was the private land issue.

“There is a potential for negative impacts on private lands,” Hancock said, adding, “ATVs can be really damaging to roads or trails when they’re not used properly.”

A meeting in Montgomery on the issue within the last year drew close to 200 people, he said, and because it was so contentious, the Selectboard decided not to amend its ordinance.

“For better or worse, we kind of punted,” he said. 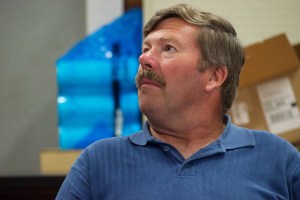 Craftsbury Selectboard member Jim Jones is shown during a discussion of ATV use on town roads. Photo by Justin Trombly/VTDigger

Craftbury’s board didn’t punt. Officials hoped that the ordinance, set to expire in November, would have given the town a trial period to see whether opening roads worked.

“We thought that might be a compromise to ease people into it,” board member Jim Jones said a few days before the vote.

Goodridge didn’t seem to have any regrets about the petition. He’d prefer having no ordinance, unless problems made one necessary. If board members take up another law, he hopes it’ll be more welcoming for ATVs.

“We’d just like the chance to show that they are used by pretty courteous people,” he said. 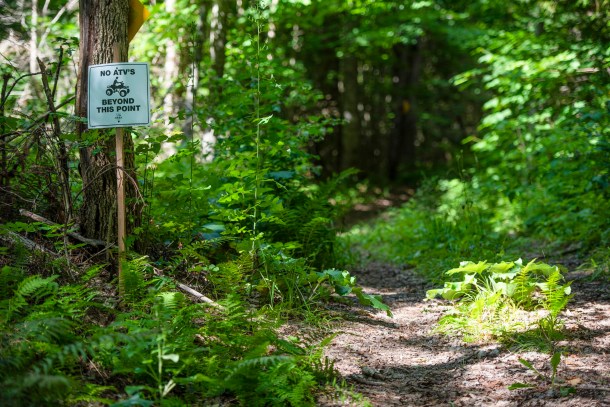 A snowmachine trail shoots off a section of Red Schoolhouse Road, a Class IV road, also used by ATV riders in Wheelock. Photo by Glenn Russell/VTDigger

Thanks for reporting an error with the story, "ATVs on town roads? Craftsbury shows how hairy the debate can get"