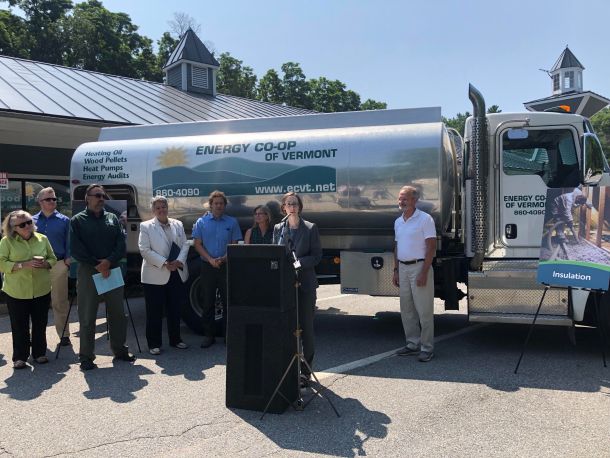 Rebecca Foster, director of Efficiency Vermont, speaks at a press conference at Energy Co-op of Vermont on Friday. Photo by Elizabeth Gribkoff/VTDigger

[C]OLCHESTER -- New incentives will shave off half the cost of home weatherization projects for moderate-income residents, Efficiency Vermont and state officials announced Friday.

Rebecca Foster, director of the efficiency utility, said at a press conference outside the Energy Co-op in Colchester that Efficiency Vermont hopes to double the number of homes it weatherizes to a total of 3,000 over the next year and a half. Insulating and air sealing homes can save a family between $500 and $800 a year in heating costs, Foster said.

The weatherization effort is part of a shift in strategy for Efficiency Vermont, which is moving from solely electric energy conservation to an all-fuels approach.

Moderate-income Vermonters -- households that make between 80% and 120% of area median income -- can receive half of home weatherization project costs back, up to $4,000.

“This is really a time when Efficiency Vermont and the utilities are working together to make it easy for customers to take action (to) save on their energy costs and reduce their carbon,” said Foster.

The incentives come as the state begins to rethink Efficiency Vermont’s focus on electrical efficiency.

While transportation accounts for over 50% of Vermonters’ energy spending, heating costs the average household $1,200 a year, according to an Efficiency Vermont white paper. And heating and transportation contribute to around 70% of the state’s greenhouse gas emissions, which have been rising in recent years.

June Tierney, commissioner of the Department of Public Service, said Vermonters spend around $500 million each year on fossil fuels for heating and driving.

“The reality that needs to translate is that it’s individuals and businesses in the state who spend that money annually,” she said.

“Our goal is to democratize fighting climate change so that it’s actually something that’s available to people of all income levels,” said Senate President Pro Tem Tim Ashe, D-Chittenden.

The Legislature passed a bill, Act 62, that directed Efficiency Vermont to use $2.25 million in savings for moderate-income weatherization incentives. That proposal came after Senate leadership deemed a House proposal to double the fuel tax to increase weatherization funding too regressive.

The Scott administration, as part of its affordability ethos, asked Efficiency Vermont to seek operational savings, said Tierney at the press conference. In May, the company told lawmakers it had $4 million in projected savings for the rest of 2019 and 2020.

“So while today we’re talking about the specifics of the next year and a half of investments and opportunities for Vermonters,” said Ashe, “this is actually what we hope (will be) a bridge program that will result down the road to a more comprehensive approach that Efficiency Vermont will take every time they visit a home or business.”

Thanks for reporting an error with the story, "Utility, state unveil weatherization incentives — and plan for 'all..."