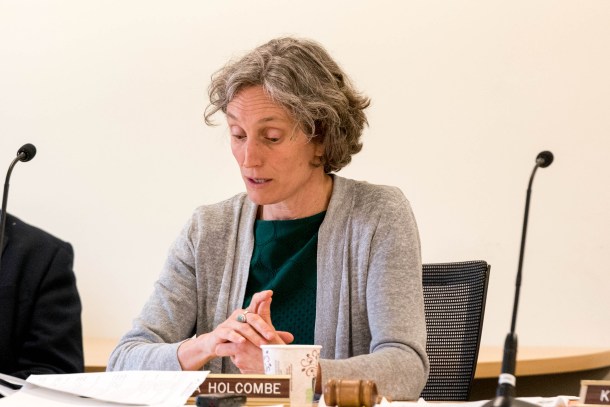 Rebecca Holcombe at a meeting in 2017, during her time as education secretary. Photo by Bob LoCicero/VTDigger

“Gov. Scott is pushing for a statewide voucher program that would take millions from our public schools and funnel it to private schools that mostly serve privileged families.”
—Rebecca Holcombe in a statement announcing her campaign for governor on July 15.

[W]hen Rebecca Holcombe stepped down as education secretary in March 2018, she went quietly despite apparent rifts with Gov. Phil Scott. When she announced last week that she was running to take Scott’s job, she came out swinging.

“I joined Gov. Scott’s administration because I took him at his word that he was serious about working to make Vermont more affordable and more equitable. I resigned when I realized that was just talk,” Holcombe said in a statement announcing her run for governor in 2020.

VTDigger is partnering with Politifact to fact-check statements about topics that are relevant to Vermonters. Learn more about Politifact's methodology, and see all of our Politifact Vermont stories.

“We need to create opportunity for every Vermonter to make our communities stronger,” she added, “but unfortunately, Gov. Scott is pushing for a statewide voucher program that would take millions from our public schools and funnel it to private schools that mostly serve privileged families. I simply couldn’t sit quietly by while our governor was pushing policies that left so many Vermonters behind.”

It’s no secret that Scott’s positions on education funding are unpopular with Democrats and much of the education community. His proposal to increase student-to-staff ratio in schools — in part by having teachers take on classes outside their expertise — was derided as soon as it arrived in the Statehouse near the end of the 2018 legislative session.

But Holcombe’s claim that Scott is “pushing for a statewide voucher program” seemed to open a new line of attack against the governor — one that was sure to strike a nerve with those worried about how Scott’s small-government philosophy will guide his education plans.

Such a change would revolutionize the relationship between Vermont communities and their schools. It would essentially create a free market for education, giving parents and guardians an annual voucher and letting them send their children to the school of their choice — independent or public — as opposed to the one in their district.

Seven Days and the Rutland Herald have already looked into Holcombe’s attention-grabbing claim, which is still posted on her campaign website. We decided the first shot fired in the 2020 gubernatorial race was worth putting to the Politifact test.

Holcombe declined to be interviewed on the record about her claim, but sent an emailed statement defending it.

“As the Secretary of Education, I spoke weekly with the heads of Gov. Scott’s administration and they made clear that their priority was protecting and expanding private school vouchers, including to schools that don't serve all students," she said in an emailed statement Tuesday.

Holcombe also pointed to a memo from her successor as education secretary, Dan French, “detailing their proposal to create a single statewide school district and statewide voucher program by expanding school choice to non-sectarian independent schools in every part of the state.”

That memo, titled “Designing Our Future: A Blueprint for Transforming Vermont’s Education System,” was provided to VTDigger in December and then discussed openly before the State Board of Education in March. 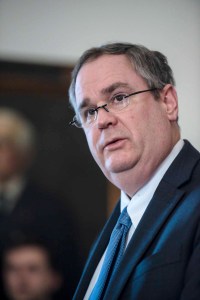 According to the memo itself, it was developed with participation from the governor’s office and his cabinet, including the secretaries of Commerce and Community Development, Digital Services and Human Services, the commissioner of Labor.

It says in part: “The system would consist of a single statewide school district. Students would have statewide school choice among all the public schools, technical centers, and non-sectarian independent schools approved by the Agency.”

However, the preface to the memo also says: “This document represents the work of a visioning exercise conducted within the Vermont Agency of Education to begin to imagine the design of a modern education system.”

Responding to questions from state board members in March, French said the memo was intended as a starting place for discussion about the future of Vermont schools, rather than a final policy proposal.

French said the two most controversial ideas laid out in his memo — a statewide voucher system and a single statewide school district — were not final answers but rather an effort to spark new ideas to address systemic challenges.

The secretary said he was looking for ways “to stimulate a conversation and interest in the future around our policy design.” French said Vermont needed to come up with a more efficient way to manage its schools, both for cost control and to achieve better student outcomes.

“My conclusion is the system is overly complex, especially when considering the scale of the system, meaning the number of school districts and the number of students,” he said. “Complexity is the chief cause of our inefficiency.”

One logical solution to the problem of complexity, French said, was a single school district. And in order to give parents maximum flexibility in this system, he added, expanding vouchers would break down barriers.

“That’s where I come to the school choice idea, it’s not as a philosophy, it’s if we had fewer barriers there’s more flexibility,” he explained.

“But the idea would be, well, if you don’t like that conclusion, let’s go back and have a serious conversation about design elements.”

So does French’s memo, combined with his appearance at the state board, amount to the Scott administration “pushing” a statewide voucher program? 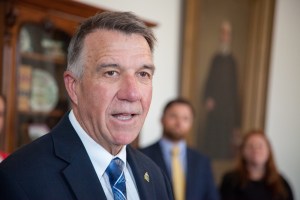 Phil Scott at his weekly press conference on May 9. Photo by Mike Dougherty/VTDigger

Without knowing more about internal conversations that Holcombe may have been a part of, it’s hard to say. But French’s tepid presentation before the board, speaking about a memo explicitly described as a conversation starter, does not amount to the administration pushing policy.

Speaking on VPR on the same week the Blueprint was leaked publicly, Scott said he gave French “great credit” for bringing new ideas to the table. But he also suggested such a radical transformation was not the works.

“I don’t think we’re ready for anything like that at this point,” he said of the single school-district idea.

Ethan Latour, a spokesperson for Scott, said in an email this week that the governor supports the expansion of vouchers if that decision is made at the local level.

“The Governor supports school choice and thinks it’s a valuable tool for parents,” Latour wrote. “If the electorate of a school district or supervisory union feels similarly about choice among the schools within its boundaries – and to be clear these are public schools in most cases – the Governor would support those local decisions.”

Latour added that the governor would like to see districts that have merged under Act 46 offer school choice to families within those new, sometimes multischool, districts. “This option, encouraged by current law, increases options for children and parents and helps local education districts preserve and expand academic programs,” he said.

So it’s clear that Scott does support expanding school choice, though not necessarily on a statewide scale. His usual spokesperson, Rebecca Kelley (who was on vacation this week), clarified earlier this month that the governor “has not proposed or pursued a statewide voucher program.”

Holcome said “Gov. Scott is pushing for a statewide voucher program that would take millions from our public schools and funnel it to private schools that mostly serve privileged families.”

The former education secretary relies on a memo and State Board Meeting in which Scott’s education secretary describes his vision for a statewide voucher program — in both cases with a clearly stated caveat that his proposal is meant to provoke a further conversation.

It’s possible that Scott would like the state to move toward the type of system described in French’s memo, but he hasn’t publicly advocated for it.

Without knowing what Holcombe heard behind closed doors during her time in Scott’s administration, we don’t know whether her statement accurately conveys the administration’s intentions. And Scott is open about his support for expanding vouchers – if communities themselves support the change.

However, there is no publicly available evidence to support Holcombe’s claim that the governor is pushing for a statewide voucher program. In fact, he has said explicitly that he doesn’t support such a major change. We rate this claim mostly false.

Thanks for reporting an error with the story, "Fact-check: Scott’s former education secretary says he’s pushing ..."