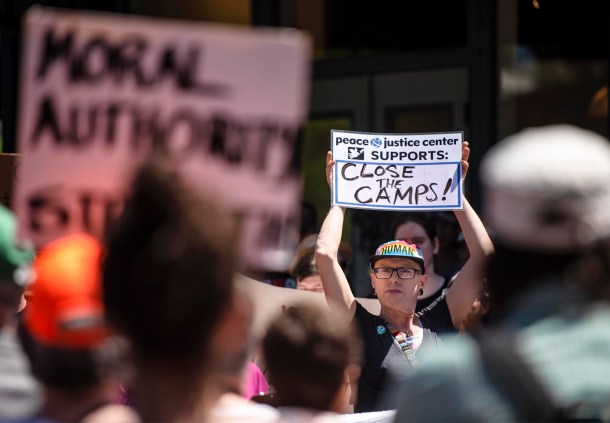 More than 200 protesters take part in a rally and march in Burlington on July 2, to protest the immigrant camps on the southern U.S. border and to call for the abolition of the Immigration and Customs Enforcement agency. Photo by Glenn Russell/VTDigger

Editor’s note: David Moats, an author and journalist who lives in Salisbury, is a regular columnist for VTDigger. He is editorial page editor emeritus of the Rutland Herald, where he won the 2001 Pulitzer Prize for a series of editorials on Vermont’s civil union law.

It seems every outrage by the Trump administration ought to be the final cannon shot to pierce the hull, sending the president at long last to political oblivion. Abuses at the nation’s borders — especially the separation of children from their parents and the squalid conditions in which migrants are being imprisoned — are so over the top that we may long for history’s judgment to be rendered in the immediate present. What are the analogies? Japanese internment? Jewish concentration camps? The judgment of history will not be kind.

And yet Trump remains afloat, buoyed by a loyal following that countenances blatant racism and the abuse of human rights. In response, protests mounted in Vermont and around the country have taken on a more strident and desperate tone. People wonder despairingly what can be done to rouse the conscience of the nation.

About 300 people gathered in Burlington earlier this month to protest the detention and separation of families at the Mexican border, but also the detention of Mexicans living in Vermont. The most dramatic abuses are occurring in Texas and other southern sites, but the shadow of Trump’s anti-immigrant policies falls also in Vermont. Vermont’s farm community acknowledges openly that it depends on a population of undocumented workers to milk the cows and carry out the other chores that yield Vermont’s most valuable agricultural product. But three workers were arrested at Walmart in Derby this month. Vermont farmers say they hire Mexican workers because of a shortage of dependable local workers. There seems to be no point to the arrest of crucially important workers other than to perpetuate the atmosphere of fear that makes them an always vulnerable caste of second-class residents.

Kunin, 85 years old, remains one of Vermont’s most eloquent voices on behalf of democratic values. She was governor from 1985 to 1991, and people may have forgotten what a dramatic breakthrough, what a pioneering moment, it was when she became governor. It took mettle. When she speaks of the abuse of children, attention must be paid.

That Trump supporters — perhaps a third of voters — remain impervious to claims about the cruelty of his policies is an enigma that goes to a core reality of American history. Some Americans have always found a way to justify cruelty toward people they believed less worthy. African Americans, native Americans, Mexicans, Asians — America’s racial caste system has always depended on the willingness of white people to assume the inferiority of others, to deny the brotherhood of man, to believe there must be exceptions to our official creed of human equality.

It’s a sorry fact that alarm about the reality of human suffering tends to be modified by bias. A much remarked-on change in attitude occurred with regard to the war on drugs when white people became the victims of the opioid epidemic. That’s when drugs became a health crisis rather than a crisis of law and order. When black people were falling victim to the crack epidemic, they were seen as criminals rather than as medical cases.

A tolerance for inequality goes back to the settling of the Americas, as author Marilynne Robinson points out in a recent essay. She cites three expressions of the political philosophies guiding the early settlers. One was a legal code for the governance of Virginia in 1611. The second was a constitution written in England by the philosopher John Locke for the Carolinas in 1669. The third was a list of proposals for good government written by the Puritan Hugh Peter and published in 1651.

The code for Virginia recommends flogging, the cropping of ears, the impaling of tongues and the death penalty for impiety. John Locke’s constitution for the Carolinas was designed to create a permanent caste system that would incorporate chattel slavery and a rigid hierarchy based on the English law of primogeniture and the maintenance of a pauper class — people who were referred to as “rubbish” or “trash.”

The Puritan code urges generosity and humanity toward all, including prisoners. Peter wrote: “Let no difference bee made between Jews, or Gentiles, bond or free, stranger or Natives, in either Criminal, or Civil things, and by this means shall the Governors bee true fathers of humanity.” In Virginia and the Carolina, oppression of lesser humans was an organizing principle. Peter urges “freedom from oppression.”

There are a variety of easy-to-assemble justifications for cruelty on the southern border. Undocumented migrants are breaking the law. They will be a burden on the U.S. economy. They include criminal elements. If you are inclined to look down on people of color, as Trump does, it is easy to seize on one of these excuses, but to do so you have to overlook a larger story that takes into account the humanity of the migrants.

Taking that into account, we see that the violence and economic oppression that the migrants are fleeing are real and are connected to the drug trade caused by demand in the U.S.; to the wars of recent decades backed by the U.S.; and by the economic inequality fostered by trade with the U.S. We are not suddenly victims of a horde on our doorstep. Ordinary people, with kids and hopes and fears, are doing what anyone would do — what the ancestors of most of us did — to survive. To turn them away or imprison them on the basis of petty legalisms requires a hardening of our own humanity — the kind of hardening that was required in Virginia and the Carolinas in order to countenance the cruelty demanded by the importation of a caste system to the Americas.

It has been Robinson’s mission in a number of essays to redeem the reputation of the Puritans, who are commonly viewed as sexually repressed, witch-burning hysterics. In fact, she shows that in England they were reformers and they brought a spirit of generosity and reform to New England, which may have made war against the slave-holding South inevitable 200 years later.

Generosity toward the stranger is a democratic, morally well-grounded and sometimes radical idea. It must compete against the greed of capitalism and the xenophobia and nastiness of demagogues like Trump. But it is a strand of our civilized life that cannot be neglected, making rallies in Burlington and elsewhere more than the background noise of restive progressives. They are an essential defense of democracy.

Thanks for reporting an error with the story, "Moats: For US, a harsh judgment ahead for anti-immigrant policies"