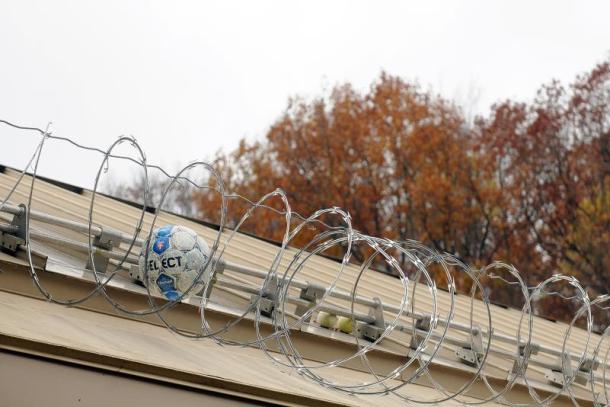 A soccer ball is snared in razor wire at the Woodside Juvenile Rehabilitation Center in Essex. Photo by Sara Priestap/Valley News

[A] lawsuit filed in federal court last week alleges that youth at Vermont’s Woodside Juvenile Detention Facility are held in “dangerous conditions,” subjected to “excessive” physical restraints, and in some cases, do not receive adequate mental health treatment.

The suit, filed by Disability Rights Vermont, a nonprofit that advocates for people with disabilities and mental health issues, comes after another lawsuit accusing the facility of excessive force and improper use of physical restraints was tossed out by a judge earlier this month.

By taking the Department for Children and Families to court over the conditions at Woodside, Disability Rights Vermont is seeking to stop the state from carrying out certain practices including painful restraints and holding actively suicidal children in isolation for long periods of time.

“We wouldn't be bringing the lawsuit if we felt that the department and the individuals in charge had resolved the problems that we have identified,” Ruben said Tuesday. “I think that we wouldn't be suing them if we didn't feel it was necessary to do that in order to get prompt resolution to the problems.”

Ruben said his organization was filing suit against the state because “most, if not all” the children held at Woodside have some sort of disability or mental health condition.

In a statement, DCF said that it was still in the process of reviewing the lawsuit, and was working with parties “including Disability Rights Vermont, on an ongoing basis to review its practices and improve them when appropriate.”

The lawsuit comes as policymakers in Vermont explore an overhaul of the juvenile justice system. Lawmakers discussed a proposal this past legislative session that would have replaced the facility at a cost of $23.3 million.

Last fall, the state decided to no longer continue its two-year effort to secure federal funding to help cover the costs of running the facility. The Department of Health and Human Services has said the facility didn’t meet its criteria for a psychiatric residential treatment facility provider. 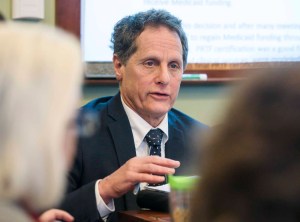 Ken Schatz, commissioner of the Department for Children and Families, testifies on the state of the Woodside Juvenile Rehabilitation Center before the House Corrections and Institutions Committee in January. Photo by Glenn Russell/VTDigger

The Colchester-based facility typically houses six to 16 youths between the ages 10 and 18, most of whom exhibit aggressive behavior and have intensive clinical needs.

In its lawsuit, Disabilities Rights Vermont cited 11 reports issued by DCF’s Residential Licensing and Special Investigations Unit in October of 2018 that found violations of state regulations at Woodside.

The reports found incidents of unnecessary use of restraints and unnecessary use of seclusion and isolation on residents, the lawsuit said. They also found Woodside staff provided inadequate mental health treatment for actively suicidal children, according to the filing.

The lawsuit summarizes reports that found Woodside staff failed to properly obtain medical care for and supervise a female resident who attempted to commit suicide in June 2018.

According to the reports cited in the filing, facility staff “prevented” the resident from being transported to a hospital after her suicide attempt which was “in violation of the prevailing standard of care.”

Instead, the resident was kept in seclusion for two days, half naked and with no mattress, the lawsuit states.

The suit also says the state has “failed to consistently transport children to the emergency department despite a number of significant suicide attempts in the facility since October 2018.”

Other reports by the special investigations unit found that Woodside’s use-of-force protocol was “dangerous and excessive.”

According to one report detailed in the filing, in June of 2018, one female resident was physically restrained and carried while shackled in handcuffs and leg irons because she refused to return to her room. Staff also put their knees into the resident’s back while she was being restrained, the report said.

The report, quoted in the filing, said video of the incident shows “restraint was not used as a last resort” and that the resident was “clearly in pain throughout the restraint.”

Before the federal lawsuit against DCF was filed last week, a Washington County Superior Court judge threw out another lawsuit alleging excessive force and inappropriate use of restraints at Woodside.

Judge Mary Miles Teachout dismissed the lawsuit filed by the Vermont Defender General’s Office in April, because the teen alleging dangerous use of restraints is no longer being held at the facility.

Thanks for reporting an error with the story, "Disability group sues Vermont’s juvenile prison over ‘dangerous c..."