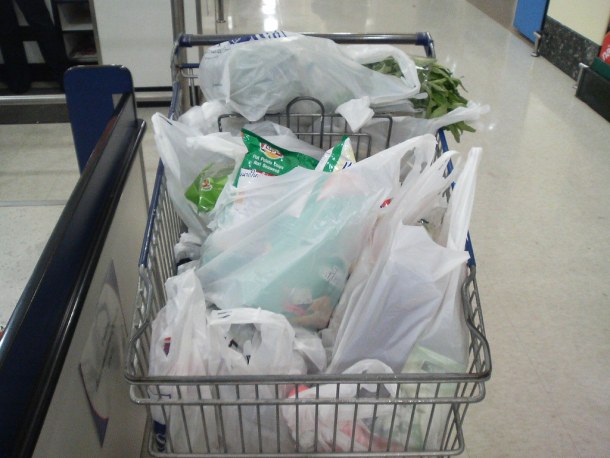 A shopping cart filled with plastic bags, which will be banned in Vermont starting next July. Photo by Keng Susumpow/Flickr

Gov. Phil Scott signed a bill into law on Monday that gives Vermont the distinction of having the most comprehensive restrictions on single-use plastic of any state in the U.S.

The bill, S.113, prohibits retailers from providing customers with single-use plastic bags at checkout and plastic stirrers starting next July. Stores can still provide customers with paper carryout bags for a fee of 10 cents.

Under the bill, retailers would also be banned from providing coffee cups, takeout containers and other food containers made from “expanded polystyrene foam,” commonly (but incorrectly) known as styrofoam. Certain foam products, like food packaged out of state and packaging for raw meat and fish, would still be allowed.

Plastic bags used for dry cleaning, packaging loose produce and other food items within stores, and thin paper bags — like those used for medicine, greeting cards and small hardware store items — are exempt from the ban.

The bill also requires that restaurants provide plastic straws to customers only upon request — an action some businesses in the state already take. Hospitals, nursing homes and hospices are exempt from that provision.

The bill had broad support in the Legislature, though House and Senate committees took hours of testimony as they ironed out the details of the bill, deciding on what products would and wouldn’t be exempt from the ban.

Environmental advocates pushed for the measures this session as a way to address the world’s growing plastics pollution problem. Paul Burns, executive director of the progressive Vermont Public Interest Research Group, referred to single-use plastic in a statement Monday as an “environmental nightmare.” 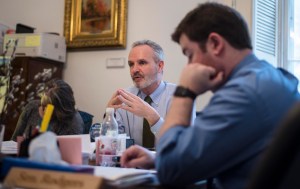 “It’s not only choking waterways and killing wildlife, it’s threatening our health too,” he said. “That’s why it’s so important that Vermont is sending such a clear message to the plastics industry today.”

The Vermont plastics bans faced late-in-the-game opposition from the national plastics industry, which funded advertising urging Scott to veto the bill after the legislative session concluded.

Matt Seaholm, executive director of the American Progressive Bag Alliance, said in a statement in May that the ban promotes thicker plastic bags over American-made single use plastics.

“If the legislation is signed into law, Vermonters will be reminded every time they go to the grocery store that their elected leaders stood with Chinese manufacturers over hard-working Americans,” he said.

The American Chemical Council also sent out a statement urging Gov. Scott to veto the bill, saying that a single-use plastics ban could lead to increased environmental impacts from alternatives and hinder recycling efforts.

Bray said he had never previously received as much “broadside from the industry” as on S.113. He added, however, that most of the opposition had not come while his committee was working on the bill, but only after it had been passed by both chambers.

“To try to (oppose) it just by scaring the governor off the bill is really proof in itself what a weak case they actually had,” he said. 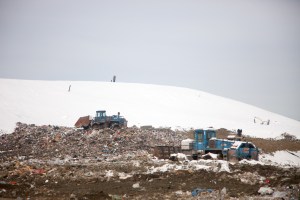 Waste is dumped into Vermont’s only landfill, operated by Casella in Coventry. Photo by Mike Dougherty/VTDigger

The EPA’s most recent data from 2015 show that only 9.1% of plastics in the U.S. are recycled. Recycling markets have been in disarray since China stopped accepting plastics and other recyclables. A recent Guardian investigation found that the U.S. ships the equivalent of 68,000 shipping containers of plastic a year to countries that do not properly manage their own plastics waste.

Danielle Garneau, a SUNY Plattsburgh ecologist who has studied microplastics in Lake Champlain, said that she feels any measures that change “daily practices” around single-use plastics are useful.

The bill signed by Scott also sets up a working group to look at reducing single-use plastics. Bray said that he feels one of the “big opportunities” for the state would be to work with manufacturers to reduce plastic packaging, building on the work of Vermont’s extended producer responsibility programs.

“Generally what we’ve seen is when you get manufacturers involved at the beginning, costs can go down,” he said.

The bill also requires the Agency of Natural Resources to look into opening a second landfill in Vermont.

Scott messaged the signing of S.113 at the same time that he announced a veto of another environmental bill, S.37, which would have forced polluters to pay for medical monitoring of impacted populations.

Thanks for reporting an error with the story, "Vermont now has nation’s broadest single-use plastics ban"