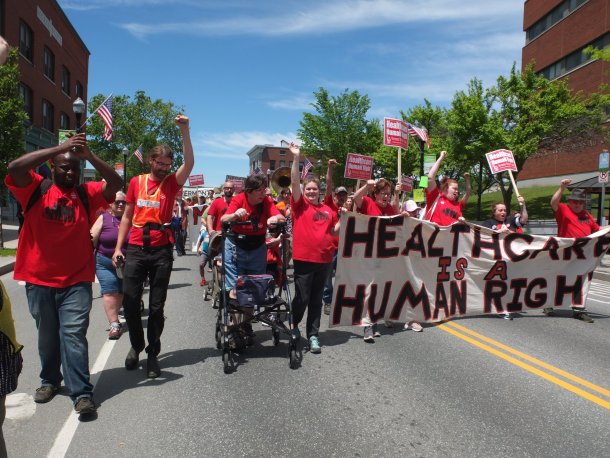 [A] broad-based advocacy group is calling for protecting and expanding Medicaid coverage and raising awareness about the importance of — and shortcomings of — Vermont’s health care system.

“My whole family has problems with our health care,” Barre resident Beth Clark said in addressing the marchers. “I’m on Green Mountain Care and it took me a long time to get a doctor. And my gram has to pay for her meds, and my mom has to pay for her insulin out of pocket. That’s why I’m marching for Medicaid!”

In 2011, Vermont passed Act 48, a health care reform law that theoretically set the state on the path towards a single payer health care system. Since then, however, Vermont Workers’ Center member Amy Lester said that [budgeting] has kept the state from fulfilling Act 48’s potential. One in three Vermonters use Medicaid — but changes under the Trump administration threaten the current system, and immediate health care expansion seems unlikely. 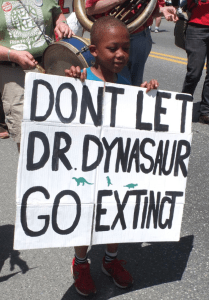 “Fast forward to 2019, and things have gotten progressively worse in terms of skyrocketing health care costs, cuts in Medicaid,” Lester said. “And so this march — the March for Medicaid — is a march to protect and expand Medicaid as we know it.”

Last year, St. Johnsbury held a similar march that Lester called “hugely successful.” Residents in Barre decided to hold their own version in 2019 to raise awareness around the importance of health care, Lester said, and to highlight the issue within their own community.

Lester initially became interested in Medicaid during her years as a guidance counselor in Barre public schools.

“I was just extremely frustrated and sad, working with families that were having a hard time with their lives due to lack of insurance,” Lester said. “As a school teacher, I had health care benefits, and it was just so frustrating to me to see that dichotomy.”

The March for Medicaid, then, is one attempt by Barre residents to remind people of the need for a solution.

“You and I are walking dollar signs to the people that profit off our current system,” South Royalton resident Hannah Williams said at the event. “I, for one, refuse to accept that politicians and billionaires have the right to tell me that my life, and the lives of the people I love, aren’t worth the risk to their profits.”

Thanks for reporting an error with the story, "Advocates march to protect Medicaid with weekend Barre rally"