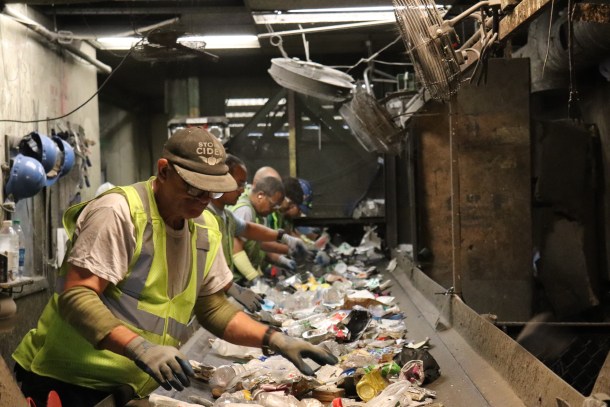 The Chittenden Solid Waste District may have violated state law when it crushed and spread glass brought to its Williston facility for recycling.

The state has cited the facility and another waste district is threatening legal action.

The Chittenden district maintains that the glass spreading was legal, but the Agency of Natural Resources has turned the case over to the Vermont Attorney General’s Office, which is investigating.

In April 2018, the ANR sent the Chittenden district a Notice of Alleged Violation for disposing of glass outside a certified facility and for failing to accurately report the disposal to the state. The district contends that it was using the crushed glass as an embankment — a use allowed by the state.

Vermont has 16 solid waste districts that work to reduce waste and ensure adequate regional access to recycling, composting and trash disposal facilities. CSWD owns one of the state’s two material recovery facilities, also referred to as a MRF, in Williston. The MRF sorts most of northern Vermont’s single stream, or “blue bin,” recyclables.

During a site visit on April 3, 2018, ANR staff observed “thousands of cubic yards of crushed glass” dumped at two sites on Redmond Road owned by CSWD, according to the notice of alleged violation.

ANR ordered CSWD to immediately stop disposing of glass at the sites and either remove the glass or obtain a solid waste permit. Barb Schwendtner, compliance section chief for ANR’s waste management division, said she could not comment on the specifics of the alleged violations while they were still being reviewed by the Attorney General’s Office.

“I can tell you that they’ve stopped adding to it,” she said of the disposal sites. She added that “all sites look the same” as when the state sent the alleged violation notice.

The allegations resurfaced at a Senate Natural Resources and Energy Committee meeting earlier this month. John Brabant, regulatory affairs director for the nonprofit Vermonters for a Clean Environment, testified that CSWD, unable to recycle glass received at the MRF, had dumped crushed glass at a closed landfill.

At a May 14 meeting, the board voted to have Tomasi see what sort of legal recourse, if any, the district could take against CSWD for the alleged glass dumping. Tomasi expressed concerns that actions like this could tarnish the reputation of recycling facilities, according to the meeting minutes.

The 49-town NEKWMD, which operates a source-separated recycling center in Lyndonville, sends glass to a Canadian company to be turned into fiberglass, said Tomasi in an interview Tuesday. But private waste haulers and four towns — Corinth, Kirby, Topsham and Westmore — within the district have sent glass to the Williston MRF, he said, and paid the Williston facility a tipping fee.

Tomasi said that for now, the NEK district’s plan is to wait and see what the Attorney General’s Office does. Rob McDougall, chief of the environmental protection division for the attorney general, said that the division is reviewing the case, but would not comment further.

“The more I look into this, the more I think, maybe we’re jumping the gun a little bit and that the (Attorney General’s) Office’s … inquiry should really be brought to a conclusion before anything else happens,” said Tomasi.

Michele Morris, outreach and communications director for CSWD, did not deny that the district had put crushed glass at those sites but disagrees with the state’s assertion that doing so was illegal.

Glass is heavy, made from a relatively inexpensive source material (sand), and has to be sorted by color, she said. So recycling glass “requires a lot of work and cleaning for a material that basically doesn’t have much value in the markets,” she said.

A 2018 survey of Northeast MRFs found that 54% of reported glass is sent to processors for further cleaning, 38.37% is used at landfills and .02% is sent directly to container manufacturers. Respondents cited challenges of recycling glass as being wear and tear on equipment, contamination, lack of markets and cost.

Morris said that CSWD had not been dumping the glass but rather was using it to line a road along the closed Williston landfill. She pointed VTDigger to a 2002 list from ANR of “acceptable uses” for processed glass aggregate, which is glass that has been cleaned and crushed to a certain size. One of the uses of processed glass aggregate is as an “embankment” to fill in a slope.

“In our point of view, it was an approved, allowable application,” said Morris.

CSWD stopped putting processed glass aggregate around the closed landfill as soon as it received the notice of alleged violation from the state, she said. The district now pays around $5 a ton to send the crushed glass to the F.W. Whitcomb quarry in Colchester.

Vermont’s other MRF — owned by Casella Waste Systems in Rutland — received approval from ANR last year to use recycled glass in construction projects at the Coventry landfill, according to a state report.

Both Morris and Tomasi said glass containers recycled at redemption centers under Vermont’s “bottle bill” are more likely to actually end up as containers again.

The bottle bill was enacted in 1972 as an anti-litter law to encourage consumers to recycle cans and bottles instead of tossing them to the side of the road. For decades Vermont consumers have been paying an extra nickel for every bottle or can of beer and soda purchased — 15 cents for liquor bottles — and getting the money back when they return empty containers to retailers or redemption centers.

Morris suggested the bottle bill could be expanded to cover wine bottles and other types of glass jars.

“That’s a better stream for glass,” she said. “Let’s get it where it has the best likelihood of having its value retained and being made back into new glass.”

Thanks for reporting an error with the story, "Glass dumping violation points to poor glass recycling market"