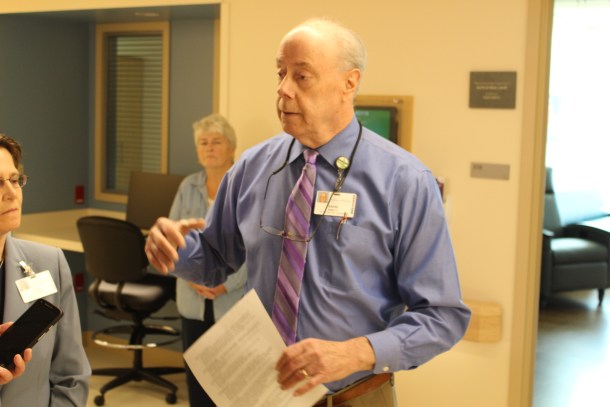 Dave Keelty, UVM Medical Center’s director of facilities planning & development, said the project was finished ahead of schedule and is projected to be under budget. Photo by Aidan Quigley, VTDigger.

BURLINGTON — The University of Vermont Medical Center is poised to open a new “state of the art” building next month, the first major upgrade to the hospital’s inpatient facilities in more than 30 years.

The new space will dramatically increase the number and percentage of private rooms throughout the hospital and include major technological advances which will improve patient care, hospital officials say.

“Single-room occupancy is better for the patient, for the family, and certainly delivers better outcomes,” said Dawn LeBaron, the hospital’s vice president for hospital services.

The new building will not increase the number of patients the hospital can care for at one time, but will have a “huge” effect on patient care, Peg Gagne, the hospital’s director of medicine, psychiatry and oncology, said.

“Right now, the rooms are so cramped, the square footage is actually smaller than these [new] rooms, and we’re putting two patients in that space,” Gagne said.

In the seven-story building, four floors are inpatient care floors with 32 rooms on each level, while two of the floors will be mechanical/support space. The bottom level is the new Emergency Department ambulance entrance.

LeBaron said the hospital was still in the planning stages in regards to the three units that will become empty as a result of the move, two of which are in the Shepardson Building, the oldest at the hospital.

Those two units will be repurposed, possibly as an outpatient-treatment center. The other floor, in the hospital’s McClure Building, will be made into a neonatal intensive care unit, LeBaron said.

The utilization of the single-patient rooms in the new wing will help the hospital better handle patient flow, LeBaron said. For example, on Friday the hospital had 40 beds in double rooms it could not use due to infectious isolation, behavioral issues, or gender match.

“That’s really is the biggest challenge for us now in being able to handle the volume of patients and get them quickly out of the ED and up to the care environment, where they really should be,” she said. “On the end of June 1, we should see a dramatic improvement in that right off the bat.”

The new building will also feature major technological improvements. Beds will be equipped with a tablet device which will allow patients access to their medical records, menus, daily schedule and educational materials, and give them control over the room’s television and lighting.

While nurses use whiteboards in the current space to communicate with each other, the new building will feature electronic screens with up-to-date patient information.

Rooms will also have more space for patients’ families, and a private bathroom and shower.

The floors are designed with more space for staff on each floor and larger care stations to allow medical staff to collaborate with each other. There will also be smaller care-stations closer to each room.

Construction on the building started in 2016.

Dave Keelty, the hospital’s director of facilities planning & development, said the project was finished ahead of schedule and is projected to be under budget. The $187 million project included $30 million in philanthropic donations from more than 1,000 households.

On June 1, 120 patients will be moved into the building between 7:30 a.m. and 4 p.m. The hospital has trained more than 400 staff members to prepare for the building’s opening, and extra staff will work the date of the move to ensure it goes smoothly.

“This is a seminal change in the way we’re going to able to administer care for our patients,” he said.

Ittleman said that the new facility will help the hospital recruit and retain physicians, researchers and nurses.

“This is as good of a facility as you’ll find anywhere in the country,” he said.

Thanks for reporting an error with the story, "Major new facility at UVM Medical Center features more private rooms"