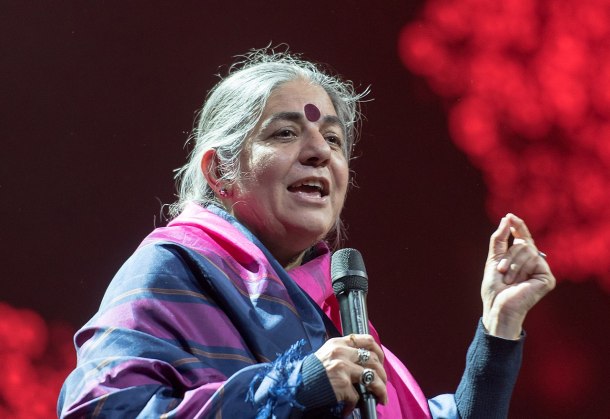 It wasn’t a big crowd. Something like 60 people before the event began, with maybe another 10 or 12 straggling along later.

And it was the usual suspects: Vermonters who are dedicated to “real organic” food production and scorn what they call “industrial agriculture.”

Many of them knew one another from earlier gatherings and campaigns. Thanks to conviviality and good weather, there was a festive mood as folks gathered on the Statehouse steps the other day. Greetings. Hugs.

No wonder. They were there to listen to one of their heroes.

Vandana Shiva, an award-winning author of 20 books and one of the world’s leading advocates of “poison-free” agriculture, spent the first few days of her current “Northeast Earth Journey” in Vermont. She gave the commencement address at Sterling College in Craftsbury Common before appearing at the Statehouse Monday to make the case against chemically enhanced farming and the dominance of seed corporations (“the poison cartel,” she called them) like Monsanto.

“Every chemical in agriculture came from the war, came from developing poisons to kill people in the concentration camps,” she said, “and that’s why killing from these poisons is not a side effect. It is the intention.”

An oversimplification. Some of those chemicals, including nitrogen fertilizer, were first developed for agricultural use, though Fritz Haber’s 1909 creation of a high-temperature, energy intensive process to synthesize nitrate was also used to make bombs.

Nobody in the crowd cared. They weren’t interested in details. Shiva was giving a pep talk, not a scholarly dissertation. She was speaking to the choir. When she finished after 20 minutes, almost everyone stepped up to sign the petition supporting her call for “poison-free food and farming by 2030” which she called “the movement of our time.”

If it is, few seem to be noticing. There were greetings, via aides, from Lt. Gov. David Zuckerman and Sen. Bernie Sanders. But no legislators showed up. Neither did a camera, microphone, or reporter from a television or radio station or a daily newspaper. Dr. Shiva and her admirers weren’t exactly ignored. But they weren’t paid much heed, either.

Well, it’s a niche movement, a cult in the eyes of its critics. Ban pesticides? This week, after some five years of hemming and hawing, the Legislature is giving final approval to a very mild, watered-down, bill (H.205) restricting the use of one kind of pesticide – the neonicotinoids that have been associated with declining bee populations. Doing anything broader or tougher than that seems close to impossible.

Besides, what’s wrong with industrial agriculture? It produces so much cheap food that more Americans are unhealthy because they eat too much than because they can’t get enough. Globally, the percentage of people who are “undernourished” has been dropping for 25 years, according to the United Nations Food and Agriculture Organization (FAO). Surely, industrial agriculture gets some of the credit for that. When it comes to the food system, maybe everybody should relax.

Vandana Shiva did not become an international celebrity because she has nothing to say. Her cause and her organization – Navdanya (nine seeds in Hindi) – would not have inspired tens of thousands of people all over the world were there not millions of people who think something is wrong with the way the world produces food.

A few hours before Shiva spoke, the UN’s Intergovernmental Science-Policy Platform on Biodiversity and Ecosystem Services released the summary of a report showing that perhaps a million species are in danger of extinction. Plants, animals, birds, fish and insects, the summary noted, are disappearing at a rate “tens to hundreds times higher than the average over the last 10 million years.”

Not just because of the eternal ebb and flow of the natural world, either. Because of what people are doing to that natural world: warming it, overusing it, polluting it.

The summary (the full report has not yet been released) does not single out conventional agriculture as a cause of this impending mass extinction. But it does note the vast increase in the amount of land used for growing food, replacing forest and other wild land where more species are likely to thrive.

The summary estimates that 10% of all insect species face extinction. It does not specifically blame pesticides. But pesticides are, as Shiva said, poisons. Killing insects is their purpose. Their use and production steadily rises, according to the FAO. It’s hardly likely that pesticide use is not one reason insect populations are in decline.

Could the entire food production system be unsustainable?

A question too complicated to be answered here. But it is worth noting that the question is no longer being asked merely by that niche on display to hear Shiva’s talk at the Statehouse. Concern about how food is produced is now in the mainstream. It is evident in the best-selling books of writers like Michael Pollan and Mark Bittman, in the growth of restaurants featuring locally grown food, in higher demand for organically grown food, in the vitality of colleges like Sterling, which attract young (and some not-so-young) people who want to produce food with minimal impact on the natural world.

And it is certainly evident in Vermont, which has seen a surge in small farms in the last 20 years. There are now many more of them than conventional, commodity dairy farms, and while their gross revenues are far smaller, they survive without government subsidies.

Whether the world could survive with the kind of “poison-free food and farming” Shiva envisions is another question. The conventional wisdom (in this case from the University of Minnesota’s Institute on the Environment) is that “nearly half the people on the planet wouldn’t be alive if not for the abundant food made possible by nitrogen fertilizer.”

Advocates of “poison-free food and farming” have the burden of demonstrating how their alternative could grow enough food. It would require a fundamentally different system of food production, which in turn would require major changes in public policy.

That means government action. But what else is new? The current system depends on government. When you go to the supermarket you are at the end of a process that has more in common with Soviet-style central planning than the kind of private enterprise envisioned by Adam Smith, or for that matter John Maynard Keynes.

All interesting questions for a discussion that may be more sustainable than the way most food is grown.

Thanks for reporting an error with the story, "Margolis: Food activist cheered by the few, ignored by the many"

Dougherty: State must put an end to child sexual abuse at Kurn Hattin