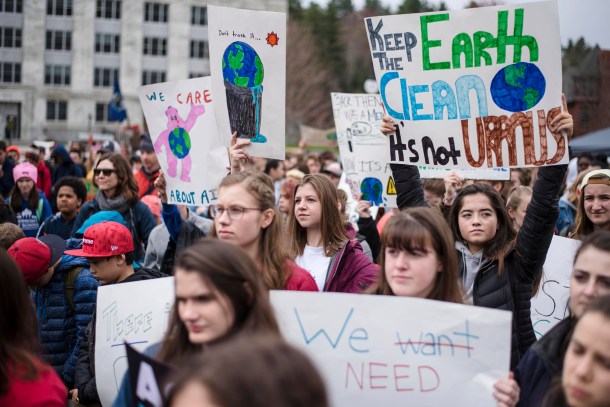 More than 300 high school students from around the state and climate change activists attended a Rally for the Planet in Montpelier on Wednesday. They marched from Montpelier High School to the steps of the Statehouse. Photo by Glenn Russell/VTDigger

The scene on the Statehouse lawn midday Wednesday might have looked like a music festival, with a reggae band playing under a tent, face painting and picnics.

But the hundreds of students participating in the Rally for the Planet had a sobering message for lawmakers: The tepid action on the climate crisis from older generations is hurting their future.

“We hear the apocalyptic warnings — our outrage is justified,” Teagan Yardley, a student at Stowe High School, said while speaking to the crowd.

Last fall, the world’s top climate scientists released a report saying that greenhouse gas emissions would need to be drastically cut over the next dozen years to limit global warming to 1.5 degrees C. A rise of even half a degree higher would lead to more extreme heat waves, a higher sea level rise and exacerbate other impacts.

Members of Vermont’s Youth Lobby have been calling on lawmakers since the first day of the session to enact sweeping climate change legislation this year.

“We’re all standing behind each other and nothing, nothing can discourage us from saving our futures from this climate crisis that we were handed,” said Sage Lawlor, of Burr and Burton Academy in Manchester. “This generation is driven and we aren’t letting up.”

Although by statute, Vermont is supposed to reduce greenhouse gas emissions by 50% below 1990 levels in 2028, the state’s latest emissions data shows emissions are 16% higher than in 1990.

Rep. Selene Colburn, P-Burlington, said during the rally that lawmakers had not acted boldly enough this session to address climate change. Earlier this session, Colburn was the lone member of the House to veto the budget, citing not enough climate-related measures.

“When your ice caps are melting fast, winning very slowly is another word for losing,” she told the crowd. A team of climate scientists recently found that part of the world’s largest ice shelf is melting 10 times faster than the rest of the shelf due to the sun heating the surface of the ocean, in a recent study in the peer-reviewed journal Nature Geoscience.

Members of the Youth Lobby delivered a letter to state leaders on Wednesday, calling for “a livable planet, good jobs and a just transition to renewable energy.” In the letter, they acknowledge that Vermont is a small contributor to global emissions, which has led some to levy the critique that any action the state takes would not have a measurable impact on climate change.

“But that does not mean that we should sit around and wait for the federal government to take the lead,” the students wrote.

The students will be scoring the Legislature’s progress on six priorities laid out at the start of the session:

As lawmakers grapple with budget constraints and competing priorities, the economy-scale transformation students are seeking is not going to happen this year.

Lawmakers have been advancing some of those items and have specifically targeted emissions from the heating and transportation sectors, which make up almost 70% of the state’s emissions.

The latest iteration of the transportation bill creates an electric vehicle incentive program for low- and moderate-income Vermonters. It establishes incentives for fuel efficient vehicles and a voucher for repairs needed to pass emissions testing for low-income Vermonters. It would also require that starting this summer over 50% of vehicles purchased for the state fleet be hybrids or electric vehicles.

The House passed a bill earlier this session that would double the tax on heating fuel to boost funding for low-income weatherization. And the Senate Natural Resources and Energy Committee will likely be voting out S.171 at the end of the week, a bill that would allow more money from Efficiency Vermont to go toward weatherization programs.

But environmental advocates have said these steps won’t create the kind of change needed to drastically cut emissions. They have been pushing lawmakers this year to pass H.462, which would turn the state’s greenhouse gas reduction goals into mandates and allow citizens to sue the state if benchmarks are not met. 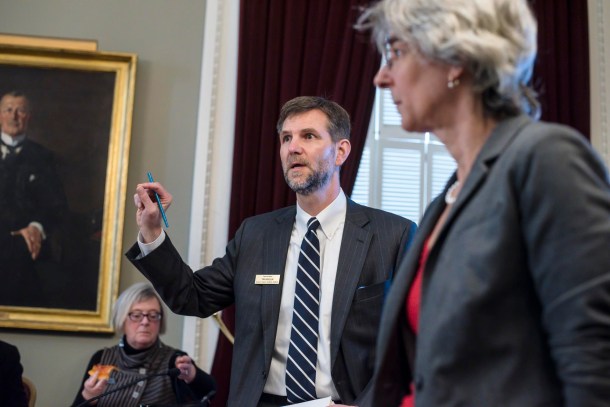 Rep. Tim Briglin, D-Thetford, chair of the House Energy and Technology Committee, center, speaks to a meeting of the Climate Solutions Caucus on April 11. Sandra Levine of the Conservation Law Foundation, right, spoke at the meeting. Photo by Glenn Russell/VTDigger

The House Energy and Technology Committee has been taking testimony on that bill. Rep. Timothy Briglin, D-Thetford, said in an interview Wednesday that his committee will be taking that bill up again next year. He said he wants to learn more about how Massachusetts, which passed a similar law in 2008, has gone about implementing that statute.

When asked how he would respond to the students’ request for more sweeping climate change legislation, Briglin noted that two cent increase to the fuel tax had not passed the House with a significant majority.

He also noted that H.477, a proposal to ramp up funding for electric vehicle incentives, weatherization and public transportation that would require a much higher fee on fossil fuels, did not move at all this session. That fee would go from $5 to $50 per ton of carbon, or up to 44 cents on a gallon of gasoline, according to a Joint Fiscal Office analysis done for a previous carbon tax proposal.

“The political reality of the situation is, here’s the challenge we had with one bill, and where’s the support for [Vermont’s version of] the Green New Deal,” said Briglin.

Thanks for reporting an error with the story, "Students reiterate demand for climate action in Statehouse rally"