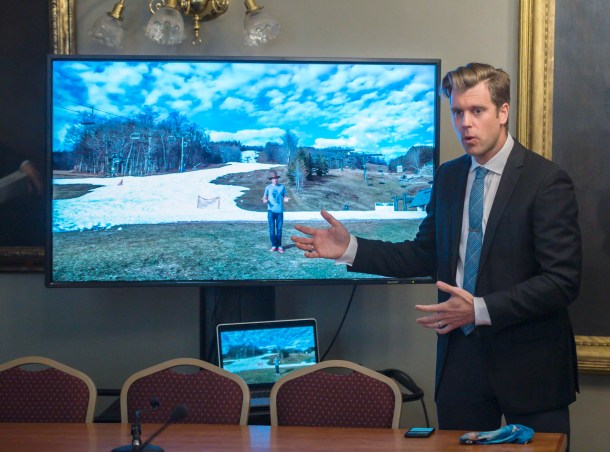 Olympic medalist snowboarder Alex Diebold speaks about the effect of climate change on winter sports during a meeting of the Climate Solutions Caucus at the Statehouse in Montpelier on Thursday, April 11, 2019. Photo by Glenn Russell/VTDigger

[O]lympic snowboarder Alex Deibold, along with his bronze medal from Sochi, came to Statehouse to push for action on climate change.

Deibold, a Massachusetts native, grew up snowboarding on Vermont’s slopes. His family moved to Manchester in pursuit of snow when he was in high school. But he said today, the snow just isn’t the same — and that has massive implications for the future of the industry.

One in seven, or approximately 51,000, Vermont jobs are in outdoor recreation, a sector that brings in $5.5 billion annually. A huge chunk of that comes from winter sports, the future of which is fundamentally threatened by climate change, Deibold said.

Deibold and other ski industry representatives, part of the outdoor sports climate advocacy group Protect Our Winters, spoke with the Joint Climate Caucus about how they could support lawmakers to enact policies that combat climate change.

Sen. Chris Pearson, P/D-Chittenden, said backing from the ski industry would be a boon for advocates of climate policy, who often don't get much support from business.

“I can’t even begin to describe how much of a game-changer that would be,” Pearson said. “It’s not a slam-dunk, and it’s not going to be enacted tomorrow, but at least having what we all know to be true, and having a business community that can say ‘we're there, this is something we have to do, we have to explore’ — total game changer.”

Though the winter sports advocates named a number of specific bills they strongly support, they came with the broader aim of offering their help to legislators already working on climate initiatives — to see how the ski and snowboard community could help push Vermont to take those actions on climate change.

“Five of our iconic Vermont industries are totally dependent on the weather to not change,” Clarkson said. “The outdoor industry — skiing and snowmobiling and ice fishing — they're all gone if we don't do this.”

The bill at the center of the conversation was H.462, the Global Warming Solutions Act, or S.173 in the Senate. Rep. Tim Briglin, D-Thetford, said the bill aims to give the state’s aspirational goals on greenhouse gas emissions more teeth, and to create a wholescale strategy for how the state should go about addressing climate legislation.

He said on greenhouse gas emissions in particular, the state is coming “way short” of its goals without rules and regulations in place to make sure it achieves them.

Though the bill is unlikely to pass this session, when asked what the feeling around the bill — which is currently in the House Committee on Energy and Technology — is like, members of the committee joked, “it’s warming.”

Deibold said getting legislation passed on climate change reminds him of the process of qualifying for the Olympics. He said it’s an uphill battle, and not every year sees the successes that he wants to see — but at the end of the day, he said, his commitment is unwavering.

“We have a group, we have power, we have numbers,” Deibold said. “And we should use that to feel empowered instead of defeated. We have momentum, and we have strength moving forward.” 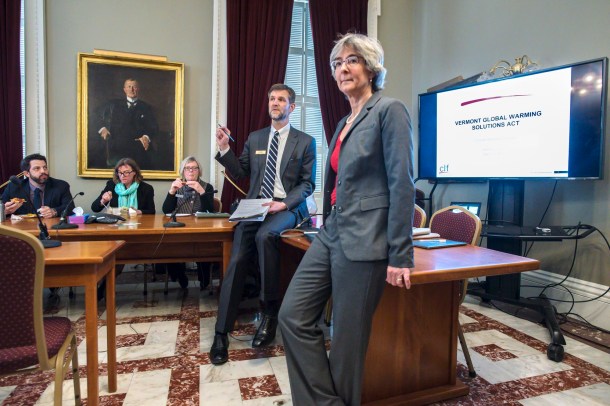 Rep. Tim Briglin, D-Thetford, chair of the House Energy and Technology Committee, center, speaks to a meeting of the Climate Solutions Caucus at the Statehouse in Montpelier on Thursday, April 11, 2019. Sandra Levine of the Conservation Law Foundation, right, spoke to the meeting after Briglin. Photo by Glenn Russell/VTDigger

Thanks for reporting an error with the story, "Olympian pushes lawmakers to act on climate change"