Every day is going to be Take Your Child to Work Day for the babies of some Vermont state employees, under a new Scott administration initiative.

Gov. Phil Scott on Thursday launched an “Infants in the Workplace Program” for children between the ages of six weeks and six months old.

All Vermont agencies have been encouraged to opt in to the program. While some are moving ahead; others are taking a wait and see approach. The agencies of Administration, Agriculture, Digital Services, Education, Natural Resources and Transportation and the Department of Labor are the first to officially adopt the Infants in the Workplace Program.

State workers in those agencies can bring babies to work after they get approval from their supervisors, and pass safety and health checks for their workplaces.

Scott said the initiative gives working families “options to give their kids the healthiest possible start to life while allowing them to remain in the workforce if they choose to.”

The governor touted the Infant in the Workplace program as an extension of his bi-state voluntary paid family leave program, which was announced last month with New Hampshire Gov. Chris Sununu.

Democrats in the Vermont Legislature rejected the governor’s voluntary paid leave proposal out of hand. House and Senate Democratic leaders, which hold supermajorities in both chambers, are pushing for a mandatory paid leave system.

Dan Pouliot, the deputy commissioner of the Vermont Department of Human Resources, said when the governor’s office called a little over a year ago asking him to look into the possibility of an Infants in the Workplace program, he was skeptical.

“I’m a 61-year-old man, so I’m a little out of demographic for it, but my initial reaction was ‘Oh my god, that sounds awful,’” Pouliot said.

But when he was researching other states with similar programs, like Arizona and Washington, Pouliot heard nothing but positive feedback.

“When I asked about disruption, coworkers being upset, parents not getting their work done, none of those things had really materialized,” Pouliot said.

Pouliot said the initial reaction from state agencies has been mixed, but he said he expects people to come around to the idea once they see it in real time.

He said parents with jobs that aren’t appropriate for this kind of program don’t often participate, and that it usually only takes a few days for people’s co-workers to adjust to babies being part of the office scenery. He hopes it might also attract more young families to live and work in Vermont. 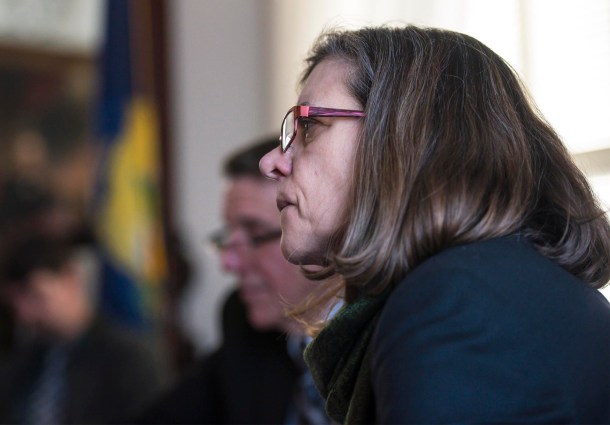 Susanne Young, secretary of the Agency of Administration, is also enthusiastic about the initiative.

“As we’ve learned from other states and private employers who have adopted similar policies, this can result in increased employee retention, boosted morale, increased teamwork and greater capacity among participating parents,” Young said in a press release.

Janet McLaughlin, interim CEO of Let’s Grow Kids, said she supports any program that helps families in Vermont, but that this is just one of many steps that need to be taken to meet Vermonters’ child care needs.

“For some families, bringing an infant to work could be really helpful, but that’s not always a viable option,” McLaughlin said. “Others need high-quality affordable child care. But I think there are some businesses who have done this successfully and have been able to create a supportive work environment that does allow for both.”

The Vermont State Employees Association has not taken a position on the program and officials declined to comment.

Thanks for reporting an error with the story, "Infants in the Workplace program launches in six state agencies"