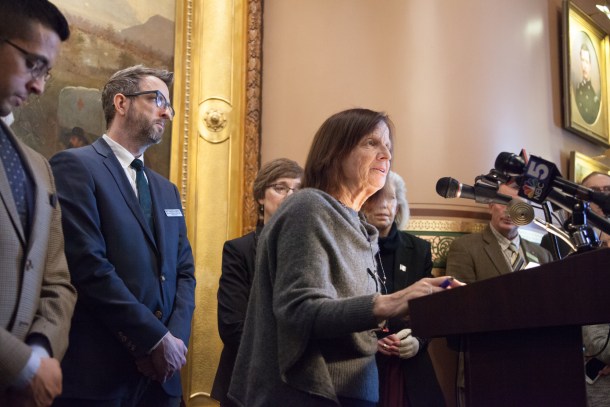 A tri-partisan group of legislators is pushing for the state to pause forced school district mergers until ongoing litigation is resolved. Speaking is Rep. Mollie Burke, P-Brattleboro. Photo by Mike Dougherty/VTDigger

[A] tri-partisan group of lawmakers want to push back the deadline on forced school district mergers under Act 46 to give the courts more time to weigh in.

Three lawsuits have been filed challenging the state-mandated consolidations, which are set to go into effect July 1. A group of legislators gathered for a press conference at the Statehouse Thursday to say they’d like to see that date pushed back at least a year, or long enough for a judge to rule on the matter.

Legislators in the group mostly hailed from the 50 or so districts facing forced mergers under the law, and they criticized the impact of consolidation on their communities. They emphasized that their only request was a temporary moratorium on forced mergers. 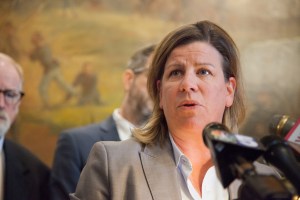 Legislative leaders have until recently indicated little desire to change the consolidation law originally passed in 2015. About two-thirds of school districts took tax incentives to merge voluntarily under the law, or were already large enough to be exempt. But on Thursday, they suggested they would consider simply postponing implementation.

House Speaker Mitzi Johnson, D-South Hero, said she was “open to exploring that and hearing what they have to say.” But she added she was making “no promises.”

Republican Gov. Phil Scott, who had previously indicated he was reluctant to revisit Act 46, said Thursday the Legislature should consider moving the deadline back a year, to July 1, 2020.

“Over the last four years, a majority of school districts have done incredibly difficult work and merged, voluntarily, under the law,” Scott said in a statement. “However, districts forced to merge under the State Board of Education statewide plan – effective November 30, 2018 – have not had a long runway to accomplish complicated work.”

If neither a judge nor the Legislature intervenes, unified districts created by state fiat must begin operations this July, which would mean electing new boards and putting unified budgets before voters this spring. People on both sides of the issue have long complained that the deadlines in the end-stage of the law would be difficult to comply with, since it left precious little time between the state board’s decision and when unified budgets would have to be ready in time for Town Meeting Day in early March.

But the lawsuits, which also ask a judge to freeze implementation of the mergers until the merits of the case are adjudicated, have also complicated and delayed the process. The widespread expectation that either the Legislature or the judge could put off the mergers have left local school officials wondering if they should budget for unification or independence.

Senate Education chair Phil Baruth, D/P-Chittenden, said there is a concern that given extra time, some school districts still won’t prepare for consolidation. But he said the Senate was open to postponing the deadline given the existing uncertainty.

“Budgets are now being written. If these communities don’t write a merged budget, and we don’t extend the timeline, it gets chaotic,” he said. “There’s a real need to clarify the situation. There are a couple ways to do it, but one way would be us passing a very simple and limited date change.”

Many legislative leaders, including House Education chair Kate Webb, D-Shelburne, have expressed concern about whether lawmakers could legislate on matters of ongoing litigation against the state. In a letter to Webb and Baruth, Scheuermann and 25 other legislators tried to address that concern, noting that lawmakers had changed the implementation date of a 2014 GMO labeling law from 2016 to 2017 after industry groups sued.

If lawmakers do decide to weigh in, they’ll have to act fast. To meet Town Meeting Day deadlines, many communities usually go to press with their budgets around the end of January. Still, March is a soft deadline – school districts are legally allowed to hold their annual meetings, when budgets are voted on by the electorate, as late as June 15.

Thanks for reporting an error with the story, "Legislators ask to push back deadline on forced mergers"