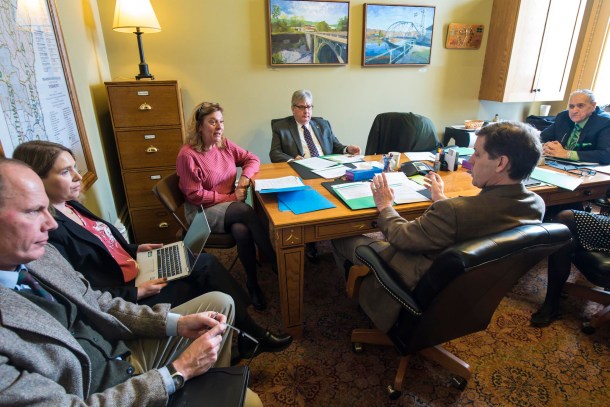 [S]enators say low-income Vermonters can’t afford the cost of repairs to bring cars into line with emissions standards now being enforced by digital systems, which have taken human discretion out of the inspection process.

Vermont’s Department of Motor Vehicles sent out postcards this month informing drivers that there are no more free passes when it comes to vehicles that fail to meet emissions standards. For repairs that cost more than $200 and are not covered by dealer warranties, car owners can still get a one-year waiver.

But members of the Senate Transportation Committee said Wednesday that punting the cost down the road wasn’t enough for Vermonters already struggling to pay their bills.

“I don’t know how we’re going to sell that,” Sen. Dick Mazza, D-Grand Isle, chair of the committee, said of the cost of repairs needed to meet the new requirements. “It’s a hardship; there’s no doubt about it.”

The state’s emissions standards have not changed in recent years, however mechanics across the state were equipped in the past two years with tablet computers to conduct inspections, explained Jennifer Pittsley, a project manager at the DMV who testified Wednesday. 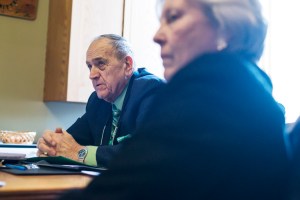 “It’s now the computer of the car talking to a computer ... so there's no more human discretion in that,” she said. “There’s not new rules or a new law, but how it's being tested and enforced that’s new.”

Sen. Jane Kitchel, D-Caledonia, noted it’s still mechanics who bear the brunt of the abuse when regulatory or enforcement changes make it harder for cars to pass inspection.

“They are really taking a lot abuse when people are really panicked,” she said.

And mechanics are apt to direct that frustration at Montpelier, said Sen. Andrew Perchlik, D-Washington.

“It’s not inviting confidence from the public when the mechanic says ‘the stupid state makes me do this stupid thing,’” he said.

Sen. Tim Ashe, D-Chittenden, the committee vice chair, said car inspections were an issue of universal relevance. “It’s the great equalizer in terms of human experience in Vermont,” he said.

Ashe suggested addressing the affordability issue by creating a subsidy program similar to Vermont’s home weatherization program, which allows the state to curb carbon emissions without passing the cost to consumers.

Mazza wondered what would happen if the state just delayed implementing the new standards for five years. 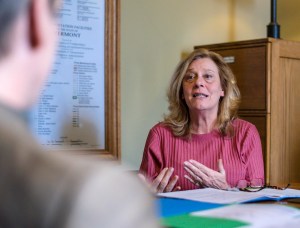 Wanda Minoli, commissioner of the Department of Motor Vehicles, testified before the Senate Transportation Committee on Wednesday. Photo by Glenn Russell/VTDigger

Wanda Minoli, the DMV commissioner, who was also testifying, said that was a question for the state’s Department of Environmental Conservation.

That’s because it’s the federal Clean Air Act that is forcing many of the changes to car inspection systems and rules -- including the electronic collection of data.

One consequence of not meeting emissions standards outlined in the Clean Air Act could be having federal highway funding withheld, said Pittsley, the IT manager.

“The current administration may not be inclined to do that,” she said of President Donald Trump’s Environmental Protection Agency, which has gone the other direction when it comes to emissions, rolling back Obama-era regulations.

Mazza said he would invite state environmental officials to talk with the committee in the coming days about the matter.

It’s not at all clear what it would cost to subsidize car repairs for low-income Vermonters whose vehicles aren’t meeting emissions standards. It would depend on factors like how “low-income” is defined, what repairs are eligible and when a car is no longer worth the investment.

Beginning in 2017, cars that were found to be safe but not meeting emissions standards were given a “conditional pass” allowing them to stay on the road. From January 2017 to November 2018, 117,709 conditional passes were issued -- about 59,000 a year, according to the DMV.

Minoli said that she is ready to work with lawmakers to come up with a solution, adding that she would report back to the committee with information about what other states were doing to support consumers facing tougher emissions enforcement.

In order to shield drivers from the new rules, the Legislature would have to delay the waiver deadline or have a solution up and running within the year.

Correction: A previous version of this article misstated Jennifer Pittsley's position in state government. She is a project manager at the Department of Motor Vehicles.

Thanks for reporting an error with the story, "Senators seek to shield Vermonters from new car inspection costs"