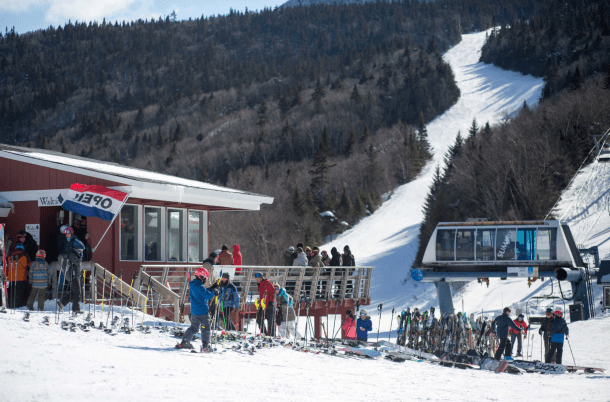 [W]ith some of the earliest openings on record, Vermont ski areas have a lot to celebrate this season. But the employment situation isn’t one of them.

“It has been a struggle, I will tell you, to hire this year,” Belinda Davison, who is in charge of human resources at Bolton Valley Resort, said in mid-November. “We are still looking in every single department.”

Vermont reported an unemployment rate below 3 percent for the 14th consecutive month in October, the month that ski areas were participating in job fairs and running ads on social media to draw job applicants in for seasonal work. The Vermont Department of Labor said employers in many industries are having a hard time filling jobs.

Bolton, which hires about 350 people in the winter, has tried job fairs, social media and offering incentives, like a sign-on bonus and a bonus for completing the season for some of its jobs, said Davison. The resort will also bring in 18 young workers from a student exchange in Peru to work in guest services, food and beverage, retail operations and at the chairlifts, said Davison. She didn’t know what type of visas the young people would be using while working in Vermont. The guest workers will live in housing provided by the resort.

Killington, Vermont’s largest ski area, has about 600 employees in the summer and around 1,600 in the winter, said spokesperson Courtney DiFiore. About 10 percent of the workers Killington hires for the winter are from foreign countries, she said. The resort owns one lodge for employee housing and offers free transportation to and from Rutland, where most workers live.

Foreign workers are also serving as a stopgap measure at Sugarbush, which has increased the number from zero in 2015 to 70 this year, said Win Smith, who owns the resort. The workers are in Vermont under the J-1 visa program, a State Department initiative that offers short-term stays described as cultural exchanges.

Sugarbush has about 160 full-time, year-round workers, and another 300 who work part-time in summer. Smith said the company seeks to add 500 or 600 people for the winter season. Wages have gone up more than inflation in the last three years, and the resort is now paying around $12 for entry-level positions, according to Smith.

The J-1 workers at Sugarbush, who will stay 90 days, are mostly from countries in Latin and South America, including Chile, Peru and Costa Rica, according to Smith.

“It’s really not an entire season; they really can only work to the end of March,” Smith said. “It gets us through the busiest time. Without them we’d have trouble with enough lift operators, housekeepers, culinary people.”

Sugarbush plans to fulfill the promises of the J-1 visa program by providing cultural experiences for its foreign workers. It has hired someone to supervise the 70 visa-holders, and is renting vans to transport them.

“It really does add to your labor cost; it’s not a savings as some people mistakenly think,” Smith said. Because the intent of the J-1 program was to introduce foreigners to the U.S., the program requires employers to show the workers around.

“If you’re going to be competitive to get these kids, you really have to do it well, because everyone is competing for a finite pool,” Smith said. “We take them to Burlington, we take them to Boston, they go to Montreal as well. They’re not just here as laborers.”

Davison, of Bolton, said next year the resort might try holding its job fairs off-site in the state’s more populous areas to try to attract workers.

“That might bring more Chittenden County people to the job fair,” she said. “Some of the other resorts will have them at a restaurant or a pub area, closer to Burlington where there are more people apt to come.”

More effective, he thinks, is providing as much housing as possible to help attract workers from outside the Mad River Valley and from outside Vermont.

“Almost everybody who applies now asks, do we have housing,” he said.

Things aren’t nearly that dire at Mad River Glen, the nonprofit cooperative ski area down the road from Sugarbush, said Eric Friedman, Mad River’s spokesman. Friedman said the resort hasn’t had a job fair in the 23 years he’s been there.

“I can count on one hand the number of employment ads that I have ever placed in our local newspaper,” he said. About 150 people work at Mad River Glen when it is fully staffed in winter.

“We (are) always looking for a couple of people here and there … but basically we have a longstanding group of employees who keep coming back year after year after year,” he said.

Friedman put this down to the resort’s culture. Many of its employees are shareholders in the co-op, and he said the non-corporate nature of the management team means it’s less likely to squelch dissent. Some of the employees have been there for decades.

“They feel like they are a part of something that matters,” he said.

Thanks for reporting an error with the story, "Ski areas struggle to staff up seasonal workforce"