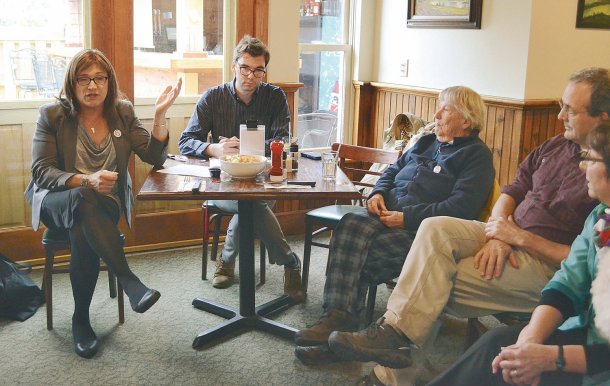 Christine Hallquist, far left, the Democratic nominee for governor of Vermont, speaks during a press conference at the Madison Brewing Co. Pub & Restaurant in downtown Bennington on Tuesday. Photo by David LaChance/Bennington Banner

This story by Christie Wisniewski was published in the Bennington Banner on Oct. 24.

[B]ENNINGTON — As she gained a local perspective on the effect the PFOA crisis has on Bennington residents’ home and health, Democratic governor candidate Christine Hallquist promised to “stand by Bennington” and ensure corporate responsibility, during a small news conference here Tuesday morning.

Hallquist spoke of how state Sens. Brian Campion and Dick Sears pushed bill S.197 through the Legislature this year, only to have it vetoed by Gov. Phil Scott. The bill would have held companies like Saint-Gobain accountable for health issues of residents caused by chemicals released.

“[Scott] talks about taking care of the most vulnerable, but he vetoes that bill,” Hallquist said. “It’s obvious he’s taking care of corporate interests.”

“We’re certainly going to stand by Bennington,” she added. “Upon election I will get that bill back to my desk and sign it as quickly as possible.”

Lora Block and her husband, Robert, 40-year residents of the Apple Hill neighborhood in the west side of Bennington, attended the news conference at Madison Brewing Co. to voice their concerns about PFOA’s impact on their community and discuss with Hallquist how the she would handle issues similar to this if elected.

“What I would like you to know is how stressful and horrendous it’s been for us all,” Block said.

Block, who is the secretary of her local homeowners association, explained to Hallquist that she and her husband moved to this area thrilled to have a well, not knowing that well would be the source of dangerous chemicals that leached into the water.

“And then, to find out that shockingly through several [governmental] administrations, Saint-Gobain was basically enabled to keep the contamination spewing out of their stacks because they were never demanded, never told to abide by regulations,” she said.

Water lines in the western section of the contamination zone are expected to be finished at the end of this month.

Block explained that when these chemicals were first noted in the area, “no one really knew of the health effects,” but nevertheless residents were concerned.

“This is even more upsetting to me to know that my state didn’t protect me when they could have,” she said. “And now we’re stuck. And because we’re on the west side [of Bennington] ... Saint-Gobain is refusing to take responsibility.”

Now, the Blocks are at the mercy of waiting for negotiations between Saint-Gobain and the state to be completed.

“The real concern is the ongoing medical issues everybody will most likely have ... and that’s what I feel we need from a new government that won’t veto legislation that would hold companies accountable,” Block said.

“Because of what’s happening in Washington [D.C.] we need to rely on good state government,” she added. “We need a government who will listen to us.”

Hallquist said her parents always taught her to take responsibility for her actions; to apologize and correct the wrong. This, she says, is the correct approach companies and state legislation need to take to mitigate the PFOA problems.

“In Vermont we are not requiring the corporations to take responsibility they ought to,” she said. 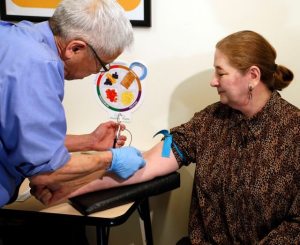 A resident of Bennington County gets a blood test for the chemical PFOA. Bennington Banner file photo

Hallquist added that she is “all about” economic development, but businesses need to take responsibility automatically and not wait until a problem like PFOA has spread.

“We have people who don’t have insurance who will [delay medical care] until it becomes a major life-threatening illness,” she said. “Unfortunately, taking care of the corporations is at the expense of the community and the taxpayers.”

She promised to ensure corporations will take responsibility in situations like this if she becomes governor, adding that some companies need concrete legislation defining their accountability.

“Those who profited from the use of those chemicals should be the ones that are paying,” she said.

In addition to addressing PFOA concerns, Hallquist had a chance to talk briefly about her stance on health care reform and local education.

“It’s obvious we need to move to Medicare for all,” she said, adding that health care has been a key part of her platform.

Hallquist said she has been in discussion with other states with hopes to form a multi-state union to accomplish the goal of Medicare for all since she doesn’t believe the federal government will make it happen.

“You never give up on the right thing to do,” Hallquist said. “We’re going to form a union of states and make it happen.”

She urged voters to demand this from their legislators even if she does not win.

Block, who is also an education consultant, also addressed her concerns about encouraging young people to stay in Vermont instead of leaving the state for college and work.

Hallquist told Block that she would “immediately” work to allow students living under the poverty line to attend college for free. She also recognizes the need to attract pre-K teachers and child care workers to the state, and believes offering student loan forgiveness to these professionals may be a way to get them to come and stay in Vermont.

“I truly believe once people get established in Vermont, they won’t leave,” she said.

Hallquist brought the discussion back to health care, adding that Vermont needs more doctors and nurses, who could also be attracted to the state if loan forgiveness is offered.

Select Board member Donald Campbell, who attended the conference, voiced his support for Hallquist’s motives but addressed his concerns about PFOA and what “the next PFOA” could be and how it could be handled better. Sears’ and Campion’s legislation was just a first step, he said.

“There will always be a next PFOA,” Hallquist said, adding that in order to be prepared to take on the “next PFOA,” both state and national government needs to be held responsible.

“That’s why I’m running for office,” she said. “This wasn’t necessarily my career plan, but I do not like the direction the state and federal government is going.”

Thanks for reporting an error with the story, "In Bennington, Hallquist vows support for toxic exposure accountabili..."

Fatal overdoses have soared since the pandemic began. Narcan distribution has, too 

YWP: Everything and Nothing