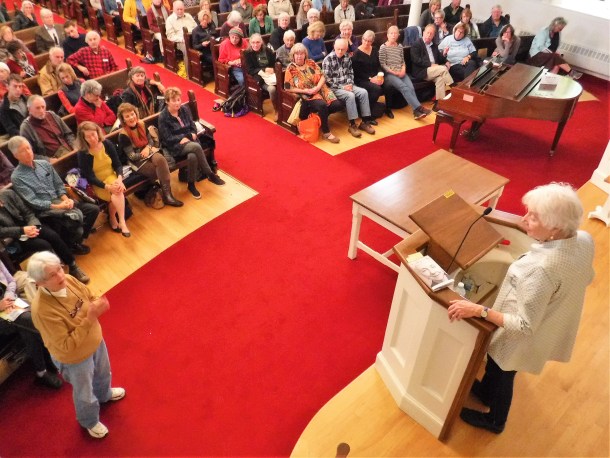 “One of the things people ask me is, ‘Why did Madeleine write such a personal book?’”

That’s why Kunin traveled over the weekend to the Brattleboro Literary Festival — less to extend an answer and more to echo the inquiry herself.

“What the hell?” the 85-year-old pioneering politician told a capacity crowd at downtown’s Centre Congregational Church before adding, “That’s the stage I’m at.” 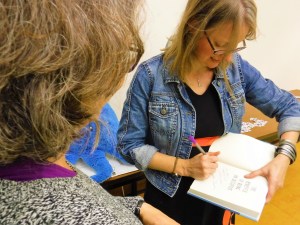 Ann Braden signs copies of her first novel, “The Benefits of Being an Octopus,” at this past weekend’s Brattleboro Literary Festival. Photo by Kevin O’Connor/VTDigger

Back in Kunin’s home Chittenden County, the Burlington Book Festival was sparking headlines for canceling a reading by Garrison Keillor, the public radio star fired for sexually inappropriate behavior. Meanwhile at the 17th annual Brattleboro event, the state’s first and so far only female governor was one of several authors speaking up for women.

Local resident Ann Braden, founder of the gun violence prevention group GunSense Vermont, appeared at her hometown festival to debut her first novel, “The Benefits of Being an Octopus,” and its story of a girl, challenged by cultural divides, trying to find her way forward.

Braden decided to write the book at a time when some gun owners were blasting her on social media.

“Sometimes it’s hard,” she said, “especially when you’ve been told your voice is not worth much.”

Then Sky Pony Press accepted her manuscript, only to dismiss most of its staff in a cost-cutting move.

“It was clear it was up to me,” Braden said of publicizing her work, which School Library Journal deems a “heartbreaking, beautifully written book” in a recent starred review.

McNamara told festival goers that volume upon volume has been written about the men of the Kennedy family, be it President John F. Kennedy or fellow political brothers Bobby and Ted. But her book is the first on their sister, Eunice Kennedy Shriver.

Although the New York Times reported both Ted and Eunice’s 2009 deaths in front-page obituaries, the newspaper didn’t treat the two equally.

“In some editions, Eunice’s name was omitted,” a subsequent Times correction noted of a photo caption identifying the family, “and in some editions Rosemary and Kathleen were reversed.”

“Invisible or interchangeable — that was the lot of the Kennedy women,” McNamara told festival goers. “That’s a portrait that does not fit Eunice Kennedy Shriver. She was a remarkable architect of social change that nobody knows about.” 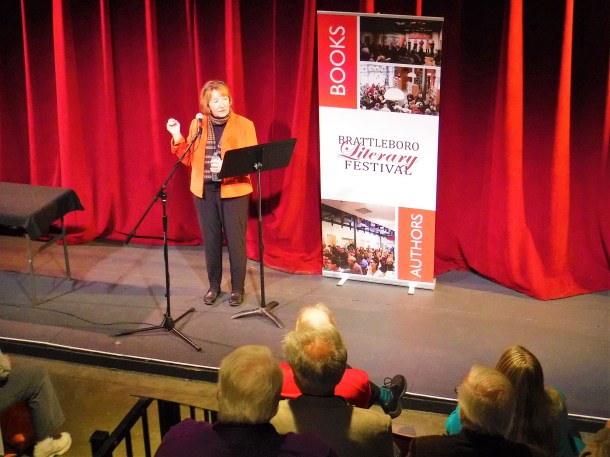 Eileen McNamara talks about her new biography “Eunice: The Kennedy Who Changed the World” at this past weekend’s Brattleboro Literary Festival. Photo by Kevin O’Connor/VTDigger

Shriver not only created the Special Olympics for people with intellectual disabilities but also pushed her brother to establish a presidential panel to help the same population.

“Eunice told Jack, ‘We’re ending the stigma now,’” McNamara said. “She got there decades before her brothers on many of the issues we associate with them. I wrote this book because it’s too easy to write women out of history and I wanted to write this one back in.”

Kunin, for her part, penned her new memoir now because, as a governor, deputy U.S. education secretary and ambassador to her native Switzerland, she didn’t publicize her personal side then for fear people wouldn’t accept her as a strong leader.

“We were navigating gender all the time,” Bankowski said in introducing Kunin. “The soft qualities were not something people wanted to see in a chief executive officer.”

Kunin is drawing capacity crowds this fall on a statewide reading tour, be it at Shelburne Farms or Greensboro’s Highland Center for the Arts. She appeared in Brattleboro alongside New York Times reporter John Leland, author of “Happiness is a Choice You Make: Lessons from a Year Among the Oldest Old.”

“It’s not really a book about old age,” Leland said of his work. “It’s a book about how we can all live better.”

Take the suggestion to “live for the moment.”

The former governor fielded questions about the present-day plight of women. She noted although headlines about sexual harassment were bad, the fact they were inspiring people to mobilize was good.

“Hang in there,” the octogenarian concluded.

Thanks for reporting an error with the story, "Political meets the personal at Brattleboro Literary Festival"

Is there a ‘skater zero’ tied to Central Vermont’s Covid outbreak?