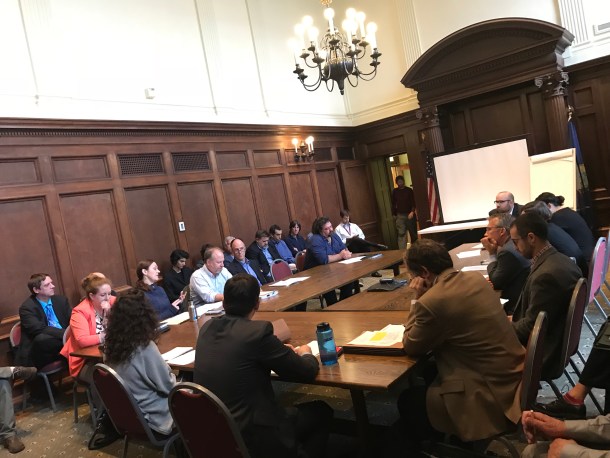 The Marijuana Advisory Commission’s subcommittee on taxation and regulation met Thursday to iron out some issues in the draft report on a legal cannabis marketplace. Photo by Kit Norton/VTDigger

With a December deadline looming for the Marijuana Advisory Commission’s recommendations on a legal cannabis marketplace, the subcommittee on taxation and regulation is facing decision time on questions of licensing and a local tax option.

In the first public meeting since the subcommittee sent a draft proposal to its members, much of the two-hour meeting on Thursday dealt with clarifying wording in the draft, including how to ensure small Vermont farms will remain competitive against larger cannabis companies, and making sure towns get a portion of the revenue from retail cannabis.

Laura Subin, the director of the Vermont Coalition to Regulate Marijuana and subcommittee member, said she was concerned that the current wording in the proposed licensing regulation would stunt small farms from joining the cultivation marketplace.

“The one concern for us was to continue to ensure the best for the smallest businesses and the smallest farmers,” Subin said, “the best system has to be set up.”

Subin said the drafted proposal’s limited number of cultivator licenses in the first year should “at least” be changed to give more leeway to the cannabis regulatory body in deciding how many licenses should be given out.

Cary Giguere, of the Agency of Agriculture, agreed, saying that the committee could recommend unlimited licenses for small or “boutique” producers of cannabis in the first year and then phase in larger scale producers in the second and the third year of the legal market.

Andrew Stein, research economist at the Vermont Department of Taxes, said that his understanding was that limiting the number of cultivator licenses was a way to control the supply and the demand so the price of cannabis did not plummet in the first year.

Major discussion also involved the system by which municipalities and towns would receive a portion of the revenue flowing into the state from retail cannabis.

According to the executive summary of the report, the “preferred” taxation structure for the subcommittee is to impose a 20 percent excise tax on retail, plus the existing 6 percent sales tax, and by extension the local option tax on sales in jurisdictions that have adopted the local option.

But Gwynn Zakov, the municipal policy advocate at the Vermont League of Cities and Towns, said that using the current local option tax would limit marijuana tax revenue to municipalities that already have a local option tax.

Local option taxes must be approved by the Legislature, and the process is time consuming and complicated. She said the subcommittee should not place “artificial barriers” into the recommendation that could make it more difficult for the industry and for towns to make decisions.

“Leave it to the Legislature. We believe there should be revenue sharing for the communities that need revenue, that may not be all of them, but those that do choose to do it should have the ability to do it locally without having legislative approval to have a local option tax,” Zakov said.

This was the last public meeting for the subcommittee on taxation and regulation and will now continue to draft its recommendation and hopes to have a final proposal ready for the full Marijuana Advisory Commission by December.

Thanks for reporting an error with the story, "Marijuana commission faces decision on cultivator licensing cap and l..."