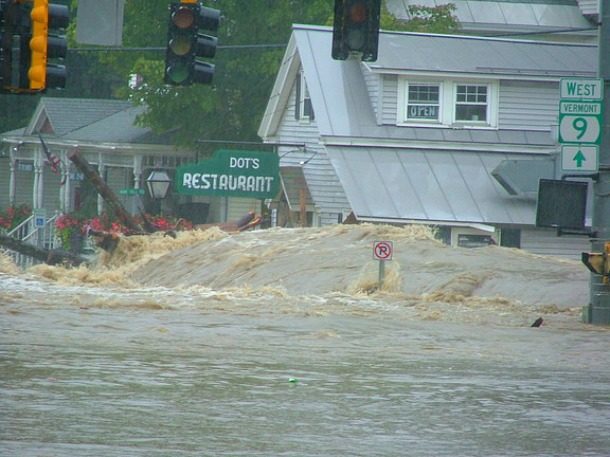 Water pours over the railings of Wilmington’s Main Street Bridge at the height of Tropical Storm Irene Aug. 28, 2011. Scientists predict more such severe storms and other impacts of rising global temperatures for Vermont. Provided photo

A report released Monday by the Intergovernmental Panel on Climate Change, a group of more than 90 scientists assembled by the United Nations to provide climate change research and policy advice, warns that current national greenhouse gas emissions targets will not be enough to keep the planet from warming more than 1.5 degrees C above pre-industrial levels. 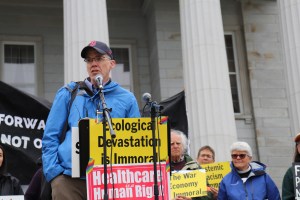 “Look, it’s too late to stop global warming, that’s no longer on the menu. We’ve already raised the temperature a good deal, and even if we do everything right at this point, the temperature will go up,” said Bill McKibben, founder of climate justice organization 350.org, in a Tuesday morning interview on the “Dave Gram Show” on WDEV radio. “That’s what the fight is about now is whether we can stop it short of levels that will completely wipe out our civilizations or not.”

Vermont’s congressional delegation agreed with McKibben’s assessment. Sen. Patrick Leahy tweeted that the report was a “must read” for “anyone who cares about our future.”

Must-reading for anyone who cares about our future, and our children’s and grandchildren’s future. Climate change is real, and so are, and will be, the devastating consequences. We can still act, but time is running out: https://t.co/z4QaeBAMGP https://t.co/C2H3O5lOou

Rep. Peter Welch called climate change “the challenge of our time” in a tweet on Wednesday.

Climate change is the challenge of our time. We need to address it urgently and decisively, not bury our heads in the sand. The price of inaction is simply too high. https://t.co/8ys1cbjUcP

While that level of warming would lead to dire consequences, a rise of even half a degree higher would lead to more extreme heat waves, a higher sea level rise and exacerbate other impacts, write the report authors. As the New York Times points out, the report finds that a 2 degree temperature rise instead of a 1.5 degree rise translates to a tenfold increase in the likelihood of an ice-free Arctic in the summer and 61 million more people exposed to severe drought in urban areas.

Capping global warming at a 1.5 degrees C increase would require global carbon dioxide emissions to decline 45 percent from 2010 levels in the next 12 years and carbon neutrality by 2050, write the report authors. This would require “rapid and far-reaching transitions” in energy, industries and land use as well as a high price on carbon, they wrote.

The IPCC report was commissioned by the signers of the Paris Agreement, a 2015 pledge by 195 countries to lower emissions to keep warming “well below” a 2 degrees C rise from pre-industrial levels. Although Trump pulled the United States out of the Paris Agreement last year, Gov. Phil Scott reaffirmed Vermont’s commitment to that accord and other state greenhouse gas emissions goals. 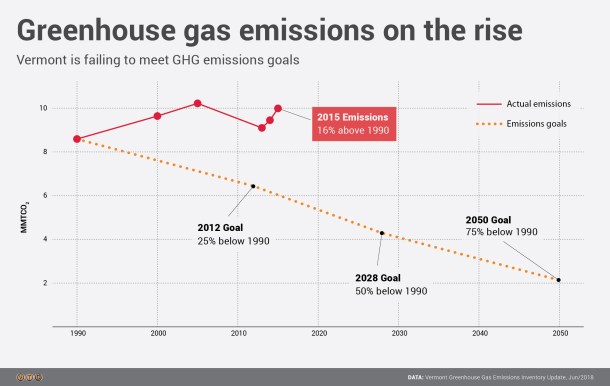 But despite Vermont’s commitment to slash emissions to 90 percent of 1990 levels by 2050, environmental advocates have pointed to the uptick in Vermont’s greenhouse gas emissions from 2012-2015 as evidence that paper goals are not enough.

“I’ve been ringing this alarm for 20 years, but ultimately we need a policy and political framework that supports the level of action that is required by what that report lays out,” said Johanna Miller, energy and climate program director for Vermont Natural Resources Council. “And so far, we’re falling radically short in that arena, and it’s going to have radical consequences.”

Although Vermont has been hailed by some as a safe haven for climate refugees, the state has already seen the effects of climate change. McKibben pointed the spread of ticks across the state in the last 15 years as a ongoing impact of warming winters. Ticks carry diseases that can infect humans and wildlife. 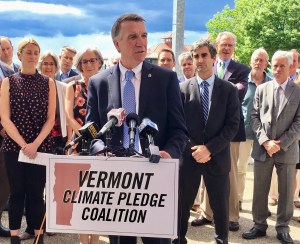 Temperatures in Vermont have gone up more than 2 degrees F since the start of the 20th century, while average annual precipitation has increased by almost 6 inches since the 1960s, according to NOAA’s National Centers for Environmental Information.

Vermont will see higher temperatures, increased precipitation, especially in the winter and spring, and more severe storms and floods.

McKibben seemed doubtful during the radio interview that this latest report would spur the global political action needed to lessen the brunt of climate change. The IPCC report says that “we need change quickly,” he said, but “the governments that would make those changes are firmly in the hands of people who won’t do it.”

“The hope is that this will galvanize people to continue rising up in the kind of big movements that have been forming in the past decade or so, and that those movements will eventually be strong enough to force real political change, but, you know, time is very short,” he added.

Sandra Levine, senior attorney with the Conservation Law Foundation, said that the report “drives home the need for Vermont to double-down on countering the inaction and backsliding from our federal government.”

“There are big opportunities ahead for Vermont to expand clean energy, clean transportation and energy efficiency and to blaze a path forward that helps avoid the worst of the climate disasters ahead,” she added.

When asked what more Vermont should do to address climate change, McKibben noted that the Green Mountain State is “a small place, so we’re obviously not going to solve this by ourselves, but every place is a small place, right?”

An immediate step the state can take would be to divest the state’s pension funds from “their investment in fossil fuel stock,” said McKibben. “People have been asking the treasurer for years and years to do it, and it’s just easier not to, so we never get it done,” he added. 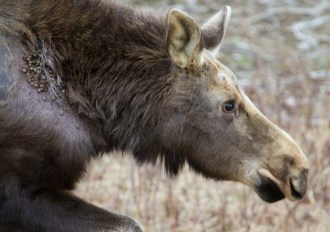 This photo from state wildlife biologist Cedric Alexander shows a moose in Brownington that has rubbed the hair off its shoulders, where a large batch of the species known as winter ticks is lodged. The ticks have evolved with deer, which are able groom them off, but moose cannot and because they may be infested with thousands, they can actually die from the pests.

When asked about her stance on fossil fuel divestment, Pearce pointed to a divestment report from an independent consultant commissioned last year by the Vermont Pension Investment Committee during an interview Tuesday.

“As a result of that study, they indicated that divestment would in fact be costly to the system and that they did not see where it would provide benefit,” she said.

“But, at this point, having done a very comprehensive analysis with an independent adviser, through a process that involved the environmental community, we do not believe that divestment is an appropriate action to take at this time.”

Peter Walke, deputy secretary of the Agency of Natural Resources, said that the report “represents a significant step in our understanding of the consequences of climate change and what we need to do to act.”

He added that the governor is “evaluating recommendations from the climate commission right now, and figuring out what makes sense. That’s a reflection of his recognition that we need to act.”

But “too many of the options available to Vermonters are simply out of sight for many in different economic classes,” so the state needs “to figure out how to reach everybody,” added Walke.

For environmental advocates like Miller of VNRC, this report paints a “sobering” picture of the outcome of a collective lack of meaningful action on climate change. “We need to stop talking about it and start doing something about it,” she said.

“This is not good news, this is not a pretty picture, but doing something about it is perhaps the largest economic development opportunity this state,” has seen, she added.

Thanks for reporting an error with the story, "UN’s dire climate change report spurs action call by Vermont en..."