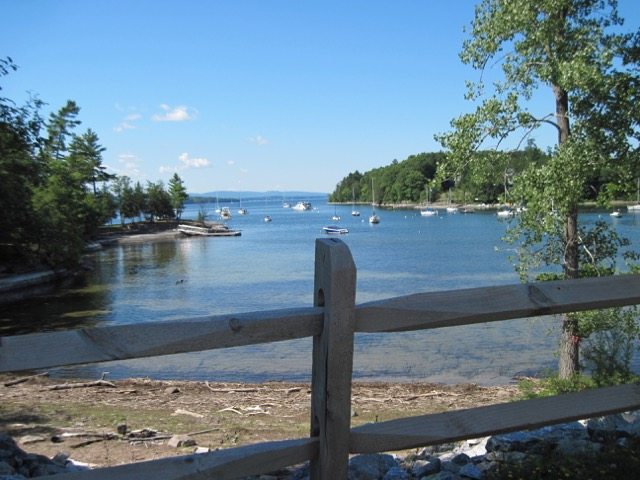 If there’s anything that everybody in Vermont knows it is that Lake Champlain must be saved. So interwoven is the lake with Vermont’s health, its economy, its sense of itself, that not doing whatever it takes to rid the lake of its unhealthy, unsightly and repulsive summertime algae blooms is unthinkable.

Oh, yeah? Try hanging around the Statehouse when lawmakers are pondering legislation about Champlain. All of a sudden, the unthinkable becomes thinkable.

Not only because the state might end up doing nothing, in which case phosphorus pollution would continue unabated, blue-green algae (cyanobacteria to scientists) would befoul more bays and inlets, fewer people would visit the state.

But also because many people don’t want to think about three other possibilities that some consider unthinkable:

• A clean Lake Champlain may not be able to co-exist with commodity dairy farming, though all those cows grazing all those pastures are also a major segment of the state’s economy, a tourist attraction, and a (politically powerful) part of Vermont tradition;

• With or without the farms, a clean lake might require more land use planning and regulation than many find acceptable;

• Even with federal help the state probably cannot clean up the lake unless it raises taxes.

Elected officials don’t like to raise taxes. That was the lesson learned by hanging around the Statehouse as the Legislature finished its 2018 session, one in which everyone from Gov. Phil Scott on down pledged to “save the lake.”

Until they had to pay for it. Everybody agreed it had to be paid for, just not the way anybody proposed at any time. Doing nothing to save the lake may be unthinkable. It is not impossible.

The scientists hope it is not too late, but listen to them closely. There’s a hint that they think it might be.

“There is a tipping point,” said Lori Fisher, the executive director of the Lake Champlain Committee, which calls itself a “science-based” advocacy group.

She didn’t say the tipping point had been reached. But another prominent lake advocate, Phelan Fretz, the executive director of ECHO Leahy Center for Lake Champlain, said that point had been surpassed for parts of the lake. 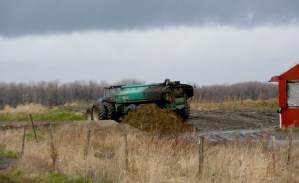 A “honey wagon,” or liquid manure truck, on a dairy farm near Mississquoi Bay. Photo by Cindy Hill

“Some embayments at this point are not usable,” Fretz said. “Missisquoi Bay, St. Albans Bay, the South Lake have passed a tipping point toward significant ecological distress. Walk along their beaches and there’s probably no one there.”

The problem, he said, is stormwater, as it passes over fields and into streams. It carries sediments, most troublingly sediments of phosphorus, which when it flows into Champlain feeds the blue algae and other plant growth. The phosphorus comes from feed, fertilizer and manure, and while not all of it comes from big dairy farms, much of it does.

Hence the concern that a clean lake could be incompatible with dairy farming, or at least with conventional, commodity, so-called “industrial” dairy farming.

It’s a concern expressed quietly and cautiously. Few Vermonters want to offend dairy farmers, not just because the farmers have political clout but also because even the most ardent clean-up-the-lake advocate doesn’t think farmers are the villains of this piece. Farmers have spent time, effort, and no small amount of money trying to reduce the flow of phosphorus into Lake Champlain’s tributaries.

But it hasn’t been enough, and according to some (though not all) of the scientists who have examined the lake and its surrounding, it can never be enough.

“It’s not that nothing has happened,” said Fisher. “But if we’re going to get to a clean lake, the regulations for farmers will not be enough. Some are saying there really needs to be a paradigm shift when it comes to dairy farming.” 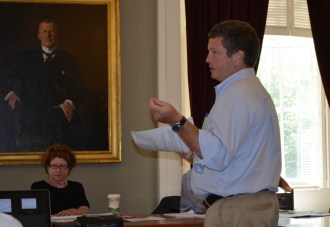 Jon Erickson, a professor of sustainable science and policy at the University of Vermont’s Rubenstein School of Environment and Natural Resources, goes further, arguing that “the modern dairy system is out of scale with what the lake can likely handle.”

Not everyone agrees. Laura DiPietro, the assistant director for water quality at the Agency of Agriculture, Food and Markets, thinks Erickson and his associates are misreading the evidence.

Let’s leave that argument to the scientists and stick to public policy — because Erickson, Fisher and other environmental advocates don’t want the farms to disappear without a care about what would replace them.

“We don’t want to lose farms to tract housing,” said Fisher, not just because that would mean suburban sprawl (with more automobile use and more greenhouse gas emissions) but because those houses could produce as much phosphorus as dairy farms.

Instead, they envision some of the land now being used by big dairy farms being converted to other, less polluting, agricultural uses, and some conserved as forest, meadow and wetlands. This “truly integrated approach” Erickson said, would include the use of zoning and “master planning.”

A hard political sell. Buying all that land (or easements on it) would cost millions. Besides, Americans are brought up to think that farms (and other businesses) arose organically where they are and as they are because people worked hard and developed money making products in a free market economy.

That happens, but except for the hard work, it is not what has happened in dairy farming, which operates in a system created, protected, regulated and subsidized by government. Dairy farmers get something like $250 million in direct payments from the government (extrapolated from $222 million in 2012, the last firm date available).

And still the dairy farms are not making money.

So there’s an opportunity there. Public policy created the dairy farming system; public policy could alter it. Over the next 20 years, $317 million could preserve a lot of forest and wetland, if the public wanted to divert money from saving unnecessary (there’s more than enough milk) dairy farms to saving the lake.

But to hang around the Statehouse when lawmakers are pondering legislation about Champlain is to wonder whether this is what the public wants to do, both because it would cost money and because it’s easy to be convinced that there’s really no emergency.

The beach at the St. Albans town park was deserted the other morning, not only because its summer season is over but because a sign warned “beach closed to swimming due to water quality until further notice.” That explains why there are many fewer tourists coming to St. Albans Bay than there were a few decades ago.

But the city of St. Albans does not seem to be suffering. It looks prosperous. A University of Vermont study of a couple of years ago found that with the decrease of just one meter of water clarity, Vermont lakeside communities would lose $16.8 million in economic activity and 200 full-time jobs.

But there are alternatives to tourism; there are tourist attractions far from the lake. For years, Lake Champlain cyanobacteria has flourished. So has Vermont’s economy. Maybe Vermont doesn’t have to save the lake.

Except, as James Ehlers of Lake Champlain International noted, cyanobacteria contains toxins. Specifically, according to a 2015 report from the National Institutes of Health, “Blue-green alga produces 4 types of toxins: hepatotoxins, neurotoxins, lipopolysaccharide endotoxins, and cytotoxins.”

Scientists are not sure how dangerous these toxins are when they come from the blue-green algae. But they are not good for you. They could be even more dangerous than land use planning and higher taxes. Hang around the Statehouse when lawmakers are talking about Lake Champlain, though, and you might get an argument about that.

An earlier version of this column referred incorrectly to James Ehlers’ organization.

Thanks for reporting an error with the story, "Margolis: Is it too late to save the lake?"

Then Again: In advocating for herself, Clarina Howard Nichols gained rights for all women