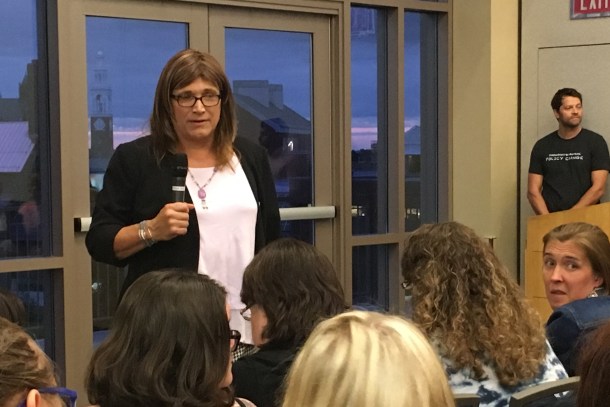 Christine Hallquist speaks to student Democrats at the University of Vermont on Wednesday. Photo by Xander Landen/VTDigger

[D]emocratic candidate for governor Christine Hallquist formally announced her plan to provide free tuition at Vermont colleges and vocational schools for low- and middle-income students, paid for with savings reaped by slashing the state’s prison population.

Hallquist’s plan, which she had spoken about before in broad strokes, would be phased in over time and initially only cover tuition for students in the state’s lowest income bracket attending Vermont state colleges, community colleges and public vocational schools.

Speaking to a packed room of student Democrats at the University of Vermont Wednesday night, Hallquist said the cost of higher education has skyrocketed since she attended college at the end of the 1970s. Overall, the price of obtaining a college education in America is 1,100 percent higher than it was in 1978, she noted.

“No one should be forced to live in poverty and no one should be denied the right to go to college because of financial constraints,” she told the students. “It’s my moral responsibility for you to get the same opportunity I did.” Hallquist received an associates degree from Mohawk Valley Community College in Utica, New York.

Hallquist has said she would follow the Vermont American Civil Liberty Union’s plan to reduce the state’s prison population by half, drastically cutting the cost of incarceration in Vermont. The state spends more than $140 million on its prisoners annually, according to the ACLU.

But Hallquist has acknowledged that savings generated by slashing Vermont’s prisoner population wouldn’t materialize immediately, and that at first, funding for free college tuition would need to come from a patchwork of other revenue sources.

To put the plan into action immediately, she says the Legislature should consider hiking the state’s alcohol and tobacco tax, and eliminate a number of economic development programs championed by Gov. Phil Scott.

In addition, the plan advises lawmakers to examine funding sources outlined in S.231, a bill pitched by Progressive Party lawmakers at the beginning of the year, which would have also provided free college tuition for Vermonters. 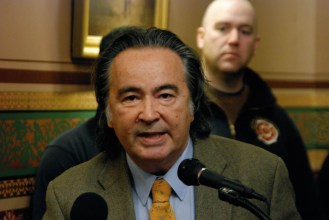 That legislation, according to Sen. Anthony Pollina, P/D-Washington, one of the bill’s co-sponsors, would have involved requiring wealthy Vermonters to pay for education based on their annual income if it’s greater than their property value.

According to Pollina, shifting the burden of paying for education away from property values and onto income for wealthy Vermonters would level the playing field and generate enough revenue to cover the cost of college tuition for those who need it — a $30 million expense annually, he estimated. The increased tax burden would apply roughly to the top third of earners in Vermont.

“The Hallquist plan offers few specifics other than letting criminals out of prison and onto our streets,” Scott’s campaign manager, Brittney Wilson, said in an email.

Wilson pointed to research, including a study by the Institute for Higher Education Policy, showing that free tuition programs in other states often struggle to help low-income students afford the full cost of higher education.

“In fact, they help those with higher incomes,” Wilson said.

The first phase of Hallquist’s plan would cover tuition for students who come from families who fall at or below the federal poverty level — which for a family of four, means an annual income of about $25,000 or less.

She estimates covering tuition for these students would be an expense of about $15 million annually. The next phase would involve paying for tuition for students who come from families who make income at or below double the federal poverty level, which Hallquist expects would cost under $40 million. Eventually, students who come from families at or below 400 percent of the poverty level could all receive the benefit.

The program would cover tuition and fees, but not room and board, and after graduating, students who received funding would be required to stay and work in the state of Vermont for as many years as they received college education.

A handful of states have instituted similar programs, and proposals for free higher education — championed on a national level by Sen. Bernie Sanders, I-Vt. — have become a standard pitch from progressive candidates around the country.

Robert Kelchen, an assistant professor of higher education at Seton Hall University who specializes in higher education finance, said that one of the biggest hurdles for states that fund free college tuition is finding a sustainable source of revenue. 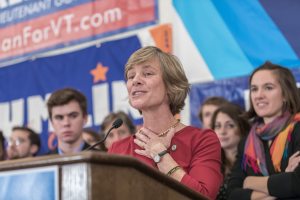 Sue Minter proposed a less ambitious free tuition program during her run for governor in 2016. File photo by Andrew Kutches/VTDigger

“You hope that’s enough, you hope you have the numbers right,” Kelchen said of Hallquist’s plan to fund the program by cutting the prison population. “But unless there’s basically a special endowment for the program, you’re making your best guess about how many students enroll and how many students you can afford.”

Kelchen said that funding college for low-income residents is actually easier, because they already qualify for extensive financial aid at the federal level. He said it would be “basically free” for the state to fund community college tuition for the lowest income students because most of it would be covered by federal aid.

But unlike some of the programs in other states, Hallquist’s program would also cover tuition at public four-year colleges, which in Vermont have among the highest prices in the country.

“Basically this means even if a student is getting a maximum Pell grant, the state has to chip in as much as another $5,000 a year for that student,” Kelchen said.

State-funded higher education programs in Tennessee, Rhode Island and Oregon only cover community college tuition. New York’s program covers four-year colleges, but only about one third of students who apply for the program receive full tuition benefits, according to the New York Times.

In 2016, Democratic candidate for governor Sue Minter ran on a platform of free college tuition, but on a smaller scale. She pitched free tuition to cover students’ first two years at Community College of Vermont or Vermont Technical College, funding the program through a bank franchise fee and corporate tax on the state’s biggest banks.

Pollina plans to reintroduce a version of his free higher education proposal in the next legislative session. He said Hallquist’s plan is a “small step in the right direction” but noted that he wants to see a proposal that can be implemented quickly, and funded through taxes.

“I would prefer not to go with the prisoner proposal … because I think you’re talking about a very long-term transition that may or may not take place,” he said.

Thanks for reporting an error with the story, "Hallquist pitches plan to fund free college tuition with prison popul..."