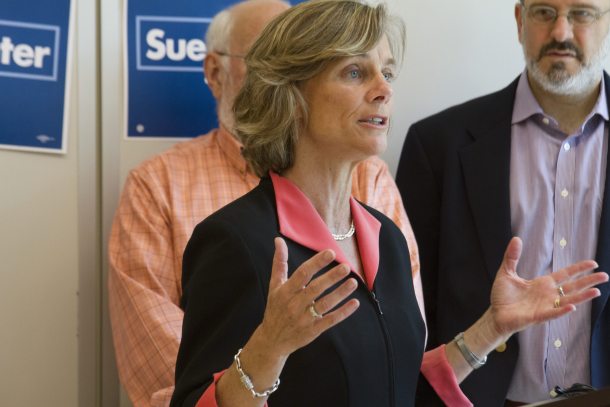 WINOOSKI — One candidate for governor is proposing free college tuition for some Vermonters.

Sue Minter, a Democratic candidate for governor, says her initiative, “Vermont Promise,” would give Vermont high school students the opportunity to attend the Community College of Vermont or Vermont Technical College for free for the first two years. After that, students would be able to continue their schooling for half the current cost of tuition.

Minter made the campaign announcement Tuesday at a press conference at the Community College of Vermont headquarters in Winooski.

The former secretary of VTrans said her goal is to increase the percentage of Vermont high school students who attend post-secondary programs. Currently, 60 percent of graduates go on to pursue some kind of college degree; Minter hopes to boost that number to 75 percent.

Vermont Promise is “a last dollar” plan. That means the state will cover tuition costs that are not paid for by grants or scholarships, Minter’s campaign manager Molly Ritner said.

In order to qualify, candidates must have graduated from high school within a year of applying with a GPA of 2.5 or higher. Each qualifying student must also work with a volunteer mentor who will help students navigate the process of applying to schools and filing for financial aid.

The plan will cost $6 million in the first year and $12 million annually after that. Vermont Promise would be funded by an increase in the bank franchise fee and would impose a new corporate income tax on the state’s largest banks. Minter says the biggest banks in New Hampshire and New York pay a corporate income tax, while those in Vermont do not.

Vermont is in the top five states for rates of high school graduation, but has one of the lowest rates of continuation to post-secondary institutions, Minter said.

High school graduates who don’t go on to college have fewer opportunities in the job market, Minter says.

The lifetime earnings of workers who hold bachelor’s degrees earn $625,000 more over their lifetimes than their peers who don’t attend college.

Minter’s plan is modeled after a Tennessee program that is funded through an endowment.

Former Vermont State Colleges Chancellor Tim Donovan, who was in attendance, said that Minter is the first of the gubernatorial candidates to make access to higher education a centerpiece of the 2016 campaign.

Thanks for reporting an error with the story, "Minter plans to offer free tuition to state colleges"

Then Again: In advocating for herself, Clarina Howard Nichols gained rights for all women