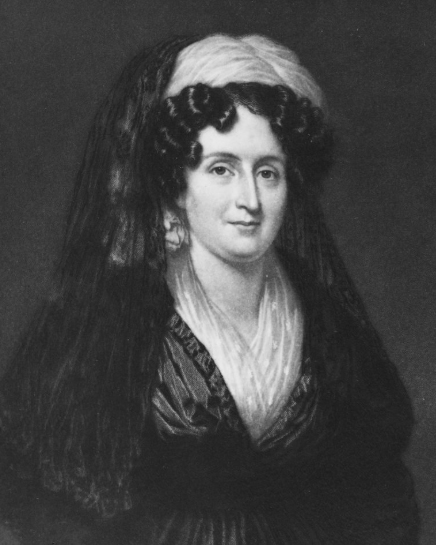 Someone robbed the Vermont State Bank in Middlebury in 1812 and made off with more than $28,000, and as a result the cause of female education gained one of its strongest advocates.

The connection isn’t immediately obvious, I realize. Let me explain.

Let’s back up to the year 1787 and the birth of Emma Hart in Berlin, Connecticut. She was the 16th of the 17 children of Samuel Hart. (Her mother, Lydia, was Hart’s second wife, so Emma was “only” the ninth of the 10 children she would bear.)

Gender roles in early post-Revolutionary America were starkly defined. Boys were to be educated and then work in the fields or in town. Girls needed no such formal education, society figured, since they were expected to perform domestic tasks. Whatever they needed to know they could learn from their mothers.

In colonial America, these gender differences were sometimes enforced by law. Anne Hutchinson was driven out of Boston and then Rhode Island in part for the crime of leading a women’s religious study group. Her family left New England for the Dutch colony of New Netherland (now New York), and was murdered there by Indians – divine retribution, some believed, for her wickedness.

The post-Revolutionary America of Emma’s childhood was tolerant in comparison. In some liberal towns, girls were allowed to use the schoolhouse before seven in the morning and after six at night, and for a few weeks each summer, though often without a teacher – in other words, when the building wasn’t needed for what was thought of as a more important function, teaching boys.

But Emma’s father had other ideas. He encouraged Emma to study. She apparently showed an aptitude for academic work, because her father was known to call her away from working with her mother to listen to an essay he had written on some philosophical theme.

At age 13, in the year 1800, Emma taught herself geometry, and two years later she enrolled in the Berlin Academy, which was essentially a finishing school for girls. After studying at the school for only two years, she began teaching there. Then, at the age of 19, she was offered a summer job teaching at a girls school in Middlebury, Vermont.

The college town was a revelation to her. There she mingled with well-educated men, graduates of one of the nation’s few colleges. 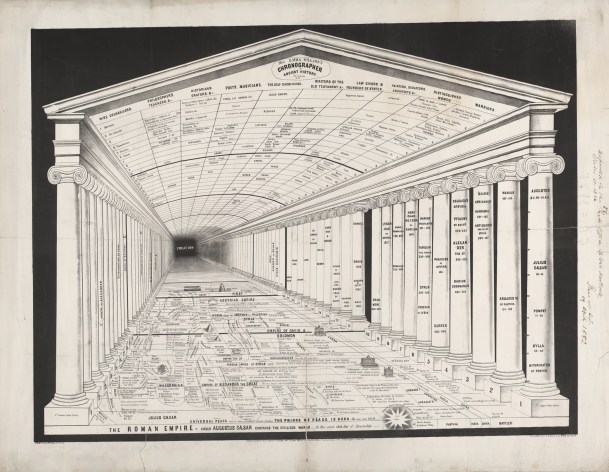 To help students remember details of ancient history, Emma Willard created a “chronograph” resembling a building receding back to “Creation,” which visually depicted what she saw as the major events. Library of Congress image

The female academy was housed upstairs from the town’s boys schools, in a large, drafty space that reminded Emma of a ballroom. In it, she taught 37 girls, who had to huddle together as winter set in, the room being heated only by a fireplace at one end.

“When it was so cold that we could live no longer,” Emma wrote years later, “I called all my girls on to the floor, and arranged them two and two in a long row for a country dance; and while those who could sing would strike up some stirring tune, I with one of the girls for a partner, would lead down the dance, and soon have them all in rapid motion. After which we went to our school exercises again.”

Emma may have taught her students using the repetition and memorization popular at the time, but she was clearly no stodgy schoolmarm. If she was popular with her students, she was less so with Middlebury College professors, who refused to let her observe classes or examinations.

She also fell afoul of a religious faction in town. The details are murky now, but some supposed indiscretion by Emma drew the wrath of some churchgoers, who threatened to close the school. A leading citizen, Dr. John Willard, rose to her defense, and won her heart. The two were married soon afterwards. She was 22 at the time; he was 50.

Willard had been the first doctor in town. Being politically connected, he had been appointed U.S. marshal for Vermont by President Thomas Jefferson and had given up his practice. Willard owned several area farms and built an impressive brick home on Main Street. Having married a man of means, Emma left teaching.

But she didn’t give up on education. In fact, she seems to have studied more than ever. Emma was greatly influenced by her nephew, who lived with the family while attending Middlebury. The young man encouraged Emma’s interest, tutoring her in geometry and philosophy. You can imagine her reading her nephew’s textbooks while nursing her young son, to whom she had given birth a year after her marriage. Unlike her mother, she would have only one child.

In 1812, two years after the marriage, shame and the specter of financial doom fell upon the family. The Vermont State Bank in town had been robbed, the directors announced, but they didn’t know when, how or by whom. Money was missing, but they’d found no sign of forced entry.

Depositors suspected an inside job, perhaps involving the directors themselves, including Dr. Willard. The directors were legally liable to make up the loss, so Willard mortgaged his farms to raise his share of the money.

Emma did what she could to help; she made plans to open a girls boarding school in their home. “My leading motive was to relieve my husband from financial difficulties,” she explained later. “I had also the further motive of keeping a better school than those about me.”

She would create an academically rigorous curriculum, akin to what boys were learning, even if she had to stay just ahead of her students in studying the subjects.

Then suddenly the family’s financial burden was lightened. The Vermont Legislature, lobbied by the directors, agreed to have the state cover most of the bank losses. The directors would only have to pay $1,238.84.

(At about this time, the robbery was linked to former resident Joshua Henshaw. A duplicate bank key was allegedly found hidden in his attic after he and his family had moved to Canada the year of the robbery. Perhaps Henshaw did it, or perhaps he was an easy scapegoat, since his departure for Canada during the War of 1812 suggests he was a British loyalist.)

Though the Willard family finances improved, Emma’s mind was made up. She would go ahead and found her school. In spring 1814, the Middlebury Female Seminary opened. 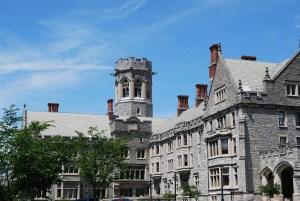 The school soon attracted many admirers, but few among state lawmakers, who refused to fund girls schools. In a letter to Fanny Pierpont Skinner, wife of governor Richard Skinner, Emma Willard wrote: “(Legislators) expend thousands for the education of male youths, but when was anything ever done by the public to promote that of females? And what is the reason for it? … It is partly from inattention to the subject, and partly from the absurd prejudice that, if women’s minds were cultivated, they would forget their own sphere, and intrude themselves into that of men.”

She may have been arguing for less than total equality, but Willard was ahead of her day. She continued to lobby for public funding for girls schools. In 1818, she wrote Vermont Gov. Cornelius Van Ness, asking for state aid. Van Ness, offering no money, suggested she help open a female seminary then planned for Burlington. She declined, and the seminary was never founded.

Instead, Emma tried her luck in New York state, where she presented the legislature with her “Plan for the Improvement of Female Education,” which called for public funding of girls schools. Willard laid out her argument step by step, like a mathematician proving a geometry theorem:

“It is the duty of a government to do all in its power to promote the present and future prosperity of the nation, over which it is placed. This prosperity will depend on the character of its citizens. The character of these will be formed by their mothers.”

Therefore, female education was essential to the nation, she argued.

Willard sent copies of the plan to national political leaders, including former Presidents Jefferson and John Adams and President James Monroe, who praised its wisdom.

Expecting state support, Emma moved in 1819 with her husband and many of her students to the town of Waterford, which provided a building for the school. But despite the support of New York’s governor, the legislature rejected the plan. The school drifted toward insolvency.

But two years later, Willard’s arguments swayed leaders of the small factory town of Troy, who created a special tax to cover the cost of buying land and a constructing a building for the Troy Female Seminary.

The school flourished, offering real academics to girls – the first time that had been done on a large scale in the United States. Other schools modeled after the seminary soon sprang up.

Within 10 years, enrollment in Troy had reached 300. The school was making money. So, too, were the textbooks Willard was writing. Her American history books would go through dozens of printings, be translated into several European and Asian languages, and remain popular for half a century.

Through all her later success, Emma Willard never forgot the role her time in Vermont played, though she didn’t mention the bank robbery. “If otherwise than as a teacher I have done any good to posterity,” she wrote, “… Middlebury will be associated with it.”

Thanks for reporting an error with the story, "Then Again: Emma Willard’s crusade for the education of girls"